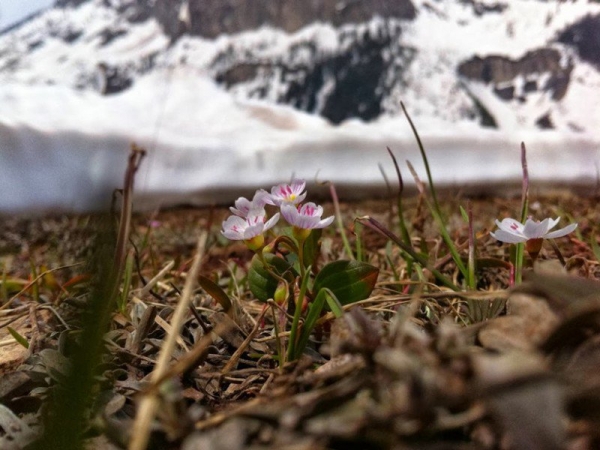 Climate change’s manipulation of global temperatures is causing glaciers to recede, icebergs to calve, and the yearly snowpack to melt earlier. But how do such changes influence life? A recent study investigated this, focusing on how early snowmelts, and therefore flowering times, affect the reproductive success of mountain plants.

To study how mountain plants react to the shifting calendar of snow disappearance, a team led byZachariah Gezon, then a graduate student at Dartmouth University in Hanover, N.H., studied the western spring beauty wildflower (Claytonia lanceolata) from 2011 through 2013. This plant typically emerges soonest among those that sprout on the Rocky Mountains during the spring thaw.

The researchers found that when snow disappears earlier, these plants have less success reproducing. However, the reproductive harm resulted from frosts damaging the tissues of early appearing blossoms rather than from any dearth of pollinators when the flowers opened ahead of schedule.

Gezon conducted this study in western Colorado as part of his doctoral dissertation. He and student volunteers set up plots near the Rocky Mountain Biological Laboratory, which is just north of Crested Butte, Colo. The plots were laced with tubers of spring beauty plants.

To simulate an early snowmelt, Gezon, who is now a conservation biologist with Disney’s Animal Program, cleared the 4-meter-square plots of snow when there was up to a meter of snow left on the ground. This snow removal triggered an early flowering response from the plants that soon grew from the tubers, similar to what would happen if climate change advanced plant flowering times earlier than when the plants normally produce blossoms.  Across the 3 years of the study, he observed that on average the plants that grew in plots freed from snow flowered 10 days earlier than plants not in the plots where snow was removed.

Early flowering plants face two main challenges as a warming climate toys with the environmental factors that trigger plant growth, Gezon explained. A timing mismatch might occur between when the plant’s flowers open and when pollinators are present, leaving the plants healthy but unable to fertilize each other. Or plants might flower before the last frosts have taken place, subjecting the delicate blossoms to destructive freezing that renders the plants’ reproductive tissues useless.

Gezon found that although he had advanced the spring beauty’s flowering time, abundant pollinators, in this casesweat bees, buzzed between plants. However, frosts later hit the plants hard, preventing the damaged plants from reproducing. He and his coauthors reported their findings on 1 February in the journal Global Change Biology.

“It doesn’t take much frost damage to severely reduce plant reproduction,” said Gezon. “Regardless of how much the pollinators visit the plants, if you get hit by frost, you just can’t reproduce.”

Removing snow from the plots alters the moisture of the soil and how much water is available to plants. To confirm that frosts, not soil moisture changes, were responsible for the reproductive declines the team observed, Gezon raised some spring beauties until they flowered in a greenhouse during the last year of the study and then transplanted them into a snowy area of his field study site. Regardless of whether the authors followed the greenhouse or snow removal methodology, episodes of frost left the earlier flowering plants unable to reproduce, Gezon said.

“The results presented here really suggest frost is the bigger problem for plants that bloom earlier than usual” instead of a timing mismatch with pollinators, said Jessica Forrest, a pollination ecologist and assistant professor at the University of Ottawa in Canada, who was not involved in the study. The finding isn’t entirely novel, but field results clarifying which factor prevails have been scarce, she noted.