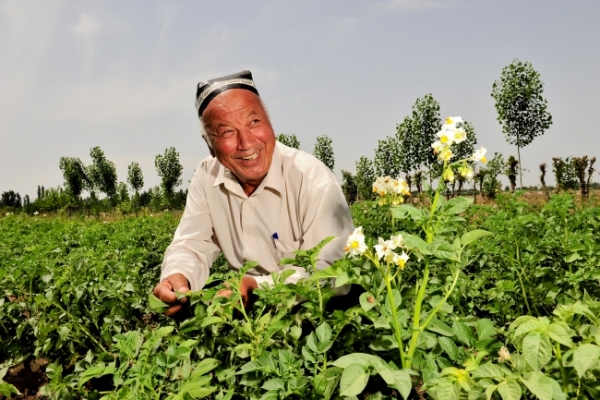 No-one knows exactly when potatoes arrived in Central Asia. Native to South America, early European traders brought the tuber east. By the late 17th century contemporary accounts suggest that the crop was well established in India and China. A century later, it was being cultivated across northern hill areas of India. It may have made it to the Central Asian farmlands from there. Equally plausibly it may have arrived around the same time via Persia (contemporary Iran) thanks to the British Consul, Sir John Malcolm, whose role in promoting it is commemorated by the potato’s locally adopted name, “Malcolm’s plum” (atuyi Malkam). In any case, the potato probably did not require formal introductions – farmers know a good thing when they see it – so it is highly likely that it found its way to Central Asia by casually migrating along both routes.

Potatoes are now a popular dish for many Central Asian families. The current Government of Uzbekistan, for instance, is keen to increase potato production both to enhance food security and boost exports. According to the official government statistical agency UzStat, nearly 80,000 hectares of potatoes were cultivated in 2013 with a total production of 2 ¼ million tons – around half the tonnage per hectare of what UK farmers produce. Given these yields, it is perhaps unsurprising that the potato remains relatively pricey in Uzbekistan compared to neighboring countries.

The region has highly seasonal rainfall patterns, so potatoes in Central Asia have to be irrigated. And they are thirsty: each plant consumes up to 200 liters of water before reaching maturity. Overall there is a growing local concern about water availability in Uzbekistan, the highest agricultural water consumer in the region. Much of the water it uses is derived from sources lying outside the country’s borders, a situation that can create uncomfortable tensions with neighboring countries whenever water shortages occur. This picture will be exacerbated by climate change. Experts think that in the future water available for irrigation may decline up to 30%.  At present, furrow irrigation is the only method used to grow potato crops, and current irrigation practices are very inefficient.

Uzbekistan wants more spuds, but may not have the future water supplies to grow them. Intrigued by this problem, scientists from IWMI and the International Potato Center (CIP) wondered if a technique called deficit irrigation could provide a solution.  This is when stages of the plant’s growth cycle are under-irrigated in order to reduce water consumed by the crop, without a significant reduction in yield. The trick is to make sure that the under- irrigation only occurs when the plant can most easily deal with it. Farmers in many water scarce regions have found the approach invaluable in conserving water whilst still delivering a healthy crop.

The team ran trials in Uzbekistan on 2 different varieties of potato under four different soil-moisture regimes. The results, recently published in the journal Agroecology and Sustainable Food Systems, were mixed. When the water deficit was high, yields were very low. However, moderate deficit irrigation did deliver decent yields compared to conventional full watering.

Similar results were obtained when the researchers looked at the economic costs. Gross margins were usually higher under conventional and moderate deficit irrigation than under extreme treatments.

So the technique could prove valuable for the region’s agriculture. Multiply the water savings accrued from moderate deficit irrigation by several thousand farmers, and they could be extremely significant in future water-scarce scenarios.

The researchers also suggest a further conclusion from the outcome of the field trials. Severe drought happens in Central Asia every five years or so. Therefore, farmers who do not have information about forthcoming water availability might still consider potato as a safe option for guaranteed farm income and household food security. However, when information about probable drought is available in advance, then planting smaller plots of potatoes with no or moderate deficit irrigation may provide more benefits than under extreme water deficit irrigation. Future research, say the authors, should focus on irrigation-fertilizer interactions for optimum management under deficit water conditions.