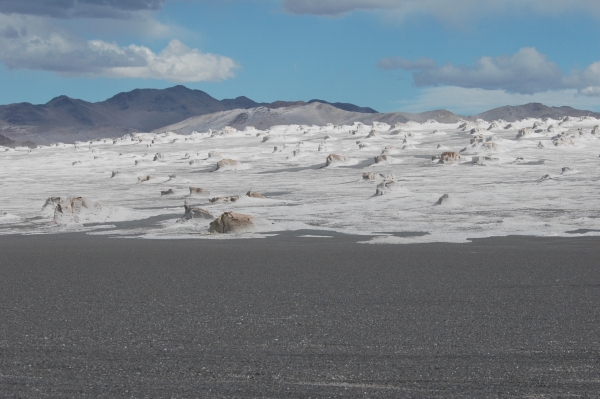 The creation of the National Protected Area, ‘Campo de Piedra Pómez’, was formalised on 11 October 2012, with the signing of the formal decree. The new protected area, in the province of Catamarca, Argentina, has an area of 75,489 ha and includes Laguna Purulla, among other wetlands. It is the only site in Argentina where the Andean Flamingo Phoenicoparrus andinus has been confirmed to nest. The technical support provided by the High Andean Flamingo Conservation Group (GCFA) and Fundación Yuchan, a local conservation NGO, was of paramount importance to the designation of the protected area, and in the preparation of a joint proposal with local environmental authorities to expand the Ramsar site.

An oasis for High Andean Flamingos

The High Andean Wetlands of Catamarca include five Important Bird Areas (IBAs) (AR073, AR074, AR076, AR077 and AR079) and are located in the extreme south of the Central Andes, in the northwest of the Republic of Argentina. The wetlands lie on an altiplano, or highland plateau, of more than 20,000 km, between altitudes of 3010 and 4600 m, and are crowned by the highest peaks in the Americas, reaching heights of 6900 m above sea level. The wetlands of the high Andean Puna ecosystem make up a system of endorheic basins (closed river basins, without major outlets of water) consisting of lakes and salt flats, often associated with highly productive Andean ecosystems such as vegas and bofedales[1], a typical high altitude moorland of the Central and Southern Andes. Thanks to the proposal by the High Andean Flamingo Conservation Group and the Fundación Yuchan the site had been designated a Ramsar Site on 2 February 2009. However, despite this
designation, the area faces imminent threats such as mining and unregulated tourism.

The lakes are very different amongst themselves, both over geographic and temporal dimensions, varying in the chemical composition of their waters, plankton, aquatic plants and emergent vegetation. The wetlands range from shallow hypersaline lakes, characterised by single-celled algae and flamingos, to deep, saline lakes, with aquatic vegetation and a wealth of bird life. Together, these wetlands provide a variety of alternative resources for birds and represent important sites for summer congregations, nesting sites for endemic species of the Puna ecosystem, and stopover sites for migratory species. Laguna Grande provides nesting sites for the Puna Flamingo P. jamesi, and habitat for important summer congregations, with up to 19,000 individuals recorded, representing 18% of the total known population of this species. Laguna Purulla is a nesting site for the Andean Flamingo. All the characteristic endemic species of the High Andean Puna are found in this area, with at least 27 species of waterbirds, including Giant Coot Fulica gigantea, Andean Avocet  Recurvirostra andina, Silvery Grebe Podiceps occipitalis juninensis and Crested Duck Anas specularioides alticola. Populations of five species of migratory birds from the northern hemisphere are also found at the site: Baird’s Sandpiper Calidris bairdii, Lesser Yellowlegs Tringa flavipes, Greater Yellowlegs Tringa melanoleuca, Wilson’s Phalarope Steganopus tricolor and American Golden Plover Pluvialis dominica.

The Flamingo Conservation Group, Fundación Yuchan and Aves Argentinas (BirdLife in Argentina) intensified ecological monitoring of the new Ramsar site and consolidated the national protected area through participative planning, communication and education activities, supported by WWF, WCS and BirdLife International. As a result, technical support has been provided to the local government authorities since the end of 2011. Also, local communities’ participation in the management and effective conservation of natural and cultural heritage at the Ramsar Site have been strengthened with the financial support of the U.S. Fish and Wildlife Service Neotropical Migratory Bird Conservation Act. Alternatives for the sustainable use of these fragile environments have also been identified.

The goals of the project represent a joint agenda between the local authorities of Catamarca and Fundación Yuchan, formalised in an agreement between the NGO and the Ministry of Environment and Sustainable Development. One of the achievements of this alliance has been the creation of the new protected area ‘Campo de Piedra de Pómez’. The Catamarca Government’s central objective in this conservation project is the protection of an extensive volcanic plateau of geological singularity. The GFCA/Yuchan team proposed to expand the protected area to include the Laguna Purulla, the only site in Argentina where the Andean Flamingo has been confirmed to breed. Additionally, these two areas, Piedra Pómez and Purulla integrate a tourist circuit attracting an increasing amount of national and international visitors annually, requiring adequate regulation. The final design of the protected area includes part of the Laguna Purulla catchment area, while the lake itself was declared a Natural Park, a management category which excludes mining activities in the area.

• More information on the project:

Bofedales: Native grassland communities of evergreen, succulent vegetation, adapted to aquatic environments; high volume and nutrient levels make them excellent fodder, can grow in running, clear water, or on permanently wet soils, of acid pH; fed by different sources, such as springs, meltwater, rivers and rainwater. Bofedales are characteristic of the mountainous regions and highland plateaus, and are mainly used for grazing of camelid species, especially alpacas.