Mountain ecosystems enrich the lives of over half of the world’s population as a source of water, energy, agriculture and other essential goods and services. Unfortunately, while the impact of climate change is accentuated at high altitude, such regions are often on the edge of decision-making, partly due to their isolation, inaccessibility and relative poverty.

That is why the United Nations Environment Programme and GRID-Arendal have partnered on a series of outlook reports about the need for urgent action to protect mountain ecosystems and to mitigate human risk from extreme events. Covering the Western Balkans, Southern Caucasus, Central Asia, (Tropical) Andes and Eastern Africa, the reports assess the effectiveness of existing adaptation policy measures and the extent to which they apply to mountain landscapes, going on to identify critical gaps that must be addressed to meet current and future risks from climate change.

The result of a broad assessment process involving national governments and regional and international experts, the reports offer concrete recommendations for adaptation. This includes sharing regional good practices with the potential for wider replication to improve cost efficiency and adaptation capacity.

While each of the regions is covered in a dedicated report, they all face similar issues. On one hand, rising temperatures and changing precipitation patterns affect a range of mountain ecosystems, including forests, grasslands and lakes. On the other, drivers such as pollution from mining and unsustainable agriculture erode their ability to cope with these changes. The combined impact is increasing vulnerability among the local and downstream populations who depend on mountain ecosystems – especially when they are isolated from markets, services and decision-making institutions.

By the end of this century, the coldest years in the Tropical Andes Mountains will be warmer than the warmest years to which humans and other species have adapted so far. A vast variety of ecosystems are found in these mountains, including the Amazon basin, snow-capped peaks and more arid areas like the Atacama Desert, the world’s driest. These support the lives of tens of millions of people, so cooperation and information sharing among Andean countries are crucial for the health of these ecosystems, which is why assistance from the respective governments has been much appreciated in creating this report. 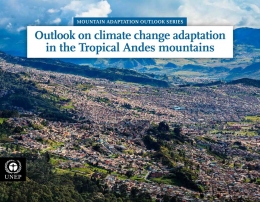