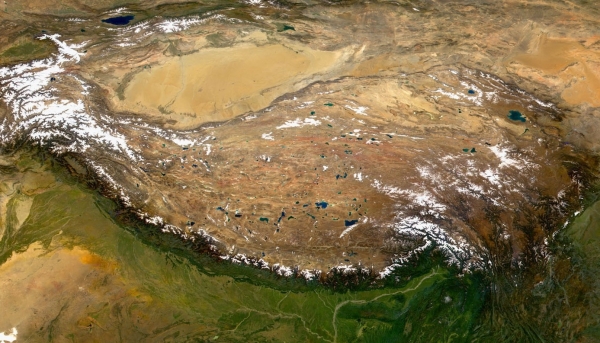 A new study in the Journal of Hydrology uses a novel modelling technique that helps scientists understand the effect of evaporation on the expansion of lakes in the inner Tibetan Plateau. This research also has implications for the use of climate models on the Plateau. In addition, the work has broader significance for weather patterns beyond Tibet, due to the plateau’s influence on the atmospheric circulation of the Asian Monsoon system.

The researchers focused on Nam Co Lake, the second largest of the more than one thousand lakes on the Tibetan Plateau. Unlike many lakes, which drain through rivers, this lake is in a closed basin, losing water only through evaporation. There is no bigger lake at a higher altitude than this body of water anywhere in the world.

In fact, Nam Co Lake is expanding, and the researchers wanted to better understand why. Seeking a fresh approach, the researchers aimed to specify the role of evaporation in this expansion.

Led by Ning Ma of the Institute of Tibetan Plateau Research, Chinese Academy of Sciences, they found that the expansion of Nam Co Lake is partly caused by decreased rates of evaporation, possibly due to declining wind speeds and decreased solar radiation.

There have been many studies exploring the rapid expansion of lakes in the region since the 1990’s, but there is no agreement on the explanation for this phenomenon. Past studies have looked at increased glacial runoff or increased precipitation as the main drivers. But the authors of this study explain that to fully understand the expansion of this closed lake, evaporation, a factor often neglected by researchers, needs to be incorporated as well.

The authors indicate that evaporation in this lake, as in other lakes, depends on several factors: the radiation that reaches the lake’s surface, air temperature, wind speed, and the dryness of the air. In order to find which of these variables has the largest effect, the scientists correlated the average values of each with the evaporation rates over the lake.

Wind speed, they concluded, was most plausible candidate. However, the lack of nearby weather stations and the mountainous landscape of the region pose an issue for the construction of accurate models which include wind speed. Because of this, the researchers used a different model than is usually employed during evaporation studies; this alternate method is called a complementary relationship lake evaporation (CRLE) model.

The CRLE model did not include wind speed measurements, but the researchers can estimate this factor by including an air stability factor that includes variables for heat and moisture content.

The study suggests that the ability to more accurately model the rates of evaporation without wind speed data is the key to counterbalancing the lack of meteorological observations in this area. Further, the need to examine the lake over decades can best be addressed by models, granted the lack of data from the weather stations in the region. Accurate models may be able to help those in the region better understand lake expansion.

The Tibetan Plateau is of great regional importance because of the role it plays in the Asian Monsoon system. Simply put, the heat energy (which is affected by evaporation) from the plateau thermally regulates the monsoon circulation patterns. Changes in evaporation rates from lakes may have implications for the many areas affected by the Asian Monsoon. By providing an assessment of the CRLE model, which the authors argue provides a more accurate representation of evaporation, this study may aid in the understanding of the processes taking place in this critical, but rapidly changing, region.