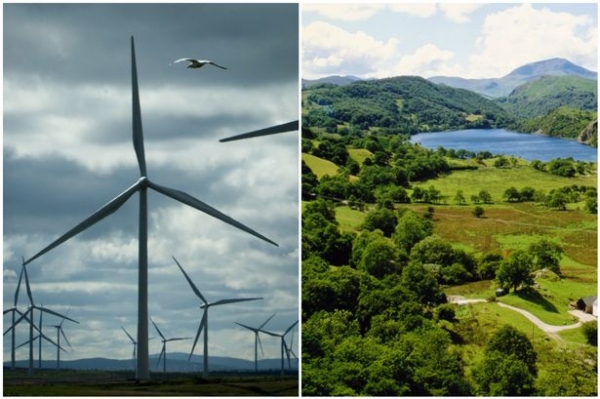 Plans for skyscraper wind turbines on Denbigh Moors will leave the mountains of Snowdonia “fenced in” and “backclothed” by the towers, it is claimed.

Planners are backing moves to build the 16-turbine Brenig wind farm, near Llyn Brenig, in North Wales, despite concerns from the Snowdonia National Park Authority.

The National Park says the plans mean walkers on the Offa’s Dyke footpath will see the 110-metre high turbines “backclothed” against the mountains of Snowdonia, including Snowdon itself.

They will leave one of Wales’ most visited natural attractions appearing “fenced in” by the turbines, says the National Park.

Approval for Brenig Wind’s scheme has been in place since 2009 - but under the original plans the turbines were to be 100m high.

Wales’ tallest building, The Tower, on Meridian Quay, in Swansea, is 107-metres high.

The turbines will not be in Snowdonia - but the National Park is complaining about the impact on views from the site, which stretches 2.5km from north to south and 2km east to
west, towards Snowdonia.

The authority is also concerned about the turbines forming part of a “dense cluster” - there are several other wind farms on the site either already built or with permissions in place.

The Clwydian Range Area of Outstanding Natural Beauty (AONB), which is to the east of the site, says it will ruin views from its protected landscape.

But a report to go before Denbighshire’s planners on November 11 flags up the fact that the turbines in the 48-megawatt scheme are in a so-called strategic search area .

These are places identified by the Welsh Government as suitable for large-scale wind farms and where major landscape change is expected.

The report reads: “The large scale and open landscape is judged to be able to accommodate large-scale wind farm development and without unacceptable damage to the landscape character and quality.”

Josh Brown, project manager at Natural Power, who are the agents for Brenig Wind, said an environmental impact assessment showed no significant effects from the 10 metre extension to the towers.

He said the difference would be imperceptible from the more "distant views of Snowdonia National Park and the Clwydian Range".

He added: "The increase enables a wider selection of turbines to be used, which could potentially increase the maximum capacity of the site. This in turn could increase the community benefit fund available to the local community.

"Through the construction activities undertaken on site so far over £1m in contracts has been awarded to Welsh companies, thus vastly benefiting the Welsh economy.

"Importantly this application gives the chance for the greatest amount of renewable energy to be harnessed at the site, which will help in combating climate change.”