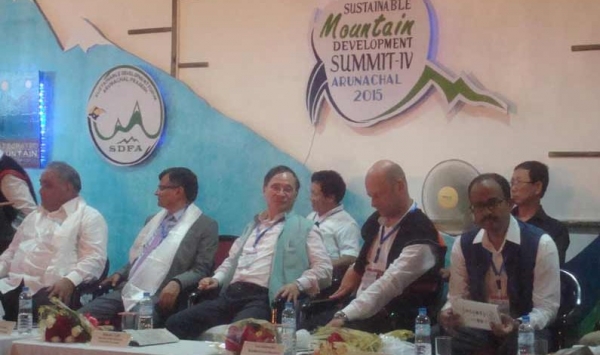 The three-day Sustainable Mountain Development Summit–IV, which concluded here on Friday, urged the Centre to consider evolving a mechanism to pay the hilly states for critical ecosystem services provided to the rest of the country.

The summit was organised by the Sustainable Development Forum Arunachal Pradesh (SDFA) under the aegis of the Integrated Mountain Initiative (IMI). The summit resolved to develop and impart need-based capacity building programmes for the mountain states to hone technical expertise in planning and development in the light of the new policies of the Centre, as also to help the states to access external funds and other support mechanism to meet development goals. The summit resolved to move the Centre to evolve a policy for mountain states to bring out a ‘State of the Mountain Report’ at regular intervals.

The legislators of Arunachal Pradesh, during the Legislators’ meet organised along with the summit, resolved to come together under the chairmanship of Assembly Speaker Nabam Rebia to form the Arunachal Pradesh chapter of GLOBE India.

“The process of integration with GLOBE India will be completed within the next three months,” the resolution said. The meet resolved that legislators from different mountain states would come together under the banner of GLOBE-IMI Pan Himalayan Legislator Forum, which would be facilitated by GLOBE India in collaboration with IMI. It was further resolved that the legislators in their own states would examine all issues and come back in the next summit with concrete and implementable policies, programmes and solutions to take the mantle of climate change adaptation and mitigation.

It was resolved that GLOBE India, along with its partners, would explore collaborations with ecologically similar nations like Nepal and Bhutan. The summit resolved that the districts of 11 mountain states would be identified and a disaster management plan would be formulated for each district within the next one year.

The Legislators’ Meet resolved to move the Centre for inclusion of Bhalukpong-Bomdila-Tawang tourist circuit in the Centre’s PRASAD scheme. “Arunachal Pradesh is one of the most important seats of Mahayana and Theravada Buddhism in India.

The 400-year-old monastery at Tawang is a symbol of vibrant Buddhism and bears testimony to age old tradition of Buddhism in the state. “This monastery is the second largest Buddhist monastery in the whole of Asia and highest seat of learning in South East Asia,” the summit observed. (PTI)