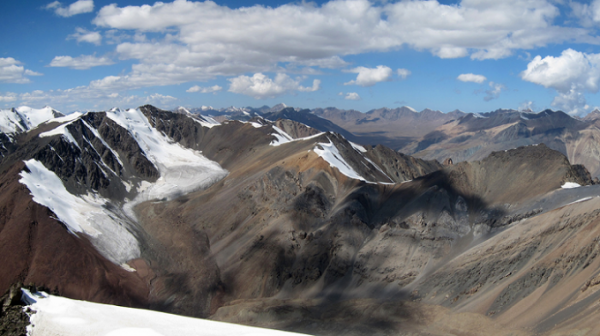 It turns out that Asia's glaciers are shrinking fast. Scientists have found along the Tien Shan, Central Asia's largest mountain range, glaciers have lost a staggering 27 percent of their mass and 18 percent of their area during the last 50 years.

Glaciers play an important role in the water cycle of Central Asia. Both snow and glacier melt from the Tien Shane are essential for the water supply of several different countries. Despite the importance of this melting snow and ice, though, very little was known about how glaciers in the region changed over the last century. That's why researchers took a closer look at the glaciers.

"We combined various methods based on satellite gravimetry, laser altimetry and glaciological modelling," said Daniel Farinotti, one of the researchers, in a news release. "This way we were able to reconstruct the evolution of every single glacier. Currently, the Tien Shan is losing ice at a pace that is roughly twice the annual water consumption of entire Germany."

Glaciers can store water as glacier ice over decades. They can also transfer winter precipitation into the summer months by releases it as melt water. This is particularly important for arid regions. However, the pace of glacier retreat has noticeably accelerated between the 1970s and the 1980s.

"The long-term signal is clearly related to the overall rise in temperature," said Farinotti. "For Central Asia, this statement is less trivial than it might seem at first glance: Since the winter months in the region are very dry and the mountains are that high, glaciers receive most of their snowfalls during the summer. This means that an increased temperature contributes to both increased melt and reduced glacier nourishment, and obviously, both contributes to glacier wastage."

The findings reveal that when it comes to these glaciers, climate change is greatly impacting them. In fact, if warming isn't slowed, then half of the total glacier ice volume present in the Tien Shan today could be lost by the 2050s.

The findings are published in the journal Nature Geoscience.