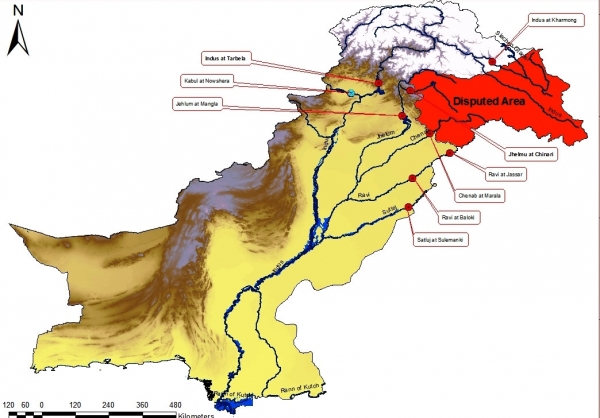 The economic life of Pakistan highly depends on the flow of the Indus River basin which supports large areas of irrigated agriculture and plays a significant role in generating hydel power for the country. The Indus River alone contributes more than half of the total surface flow and has a controlling storage at Tarbela Dam as the river comes down from the mountains.

Tarbela was primarily designed for irrigation control, but it also has an installed hydropower capacity of 3700 MW providing roughly 13 per cent of Pakistan’s annual power output. Inflow to Tarbela is measured at Besham, which has a mean annual flow of 2425 m3 /s (1969–2001), varying annually from 80 to 130 per cent from the mean flow. This represents considerable variation in the potential for irrigation and hydropower production.

The world’s freshwater resources are depleting day by day. Pakistan has also reached the critical limit of per capita water availability. Pakistan’s storage capacity has reduced to 30 days per year which is well below the standard value of storage capacity. In Pakistan, the tensions are increasing daily on water distribution and allocation among provinces in the country.

The Indus River and its tributaries, the Jhelum, Chenab, and Sutlej rivers originate from the Karakoram, Hindukush, Himalayan mountain ranges, and the Upper Indus Basin (UIB) extends from the Tibetan Plateau to northeast Afghanistan. These mountains provide the major component of water for the Indus Basin Irrigation System, one of the largest integrated irrigation networks. An understanding of the annual variability in volume and timing of flows is therefore vital for water stewardship in the region.

Assessment of the impacts of trends or periodic variation in flows of the Indus River basin is necessary to build understanding about the erratic flow of the Indus River and its tributaries. Pakistan is an agrarian country with a quarter to half of the population dependent on the agricultural economy. Proper water stewardship for irrigation and agriculture requires proper evaluation of available water.

More than 80 per cent of the flow in the Indus as it emerges into the plains of Punjab is derived from the melting of seasonal and permanent snowfields and glaciers. The emission of green house gases and the subsequent global warming represent a major threat to this precious source of freshwater. Increased negative human activity due to border tensions between the neighbouring countries of Pakistan and India is also emerging as an environmental threat for this source of freshwater in the region.

The upper Indus basin consists of a series of mountain ranges of extreme rugged terrain at high elevations. Pakistan’s Indus River basin system consists of five major rivers, namely the Indus, Jhelum, Chenab, Ravi, and Sutlej. These five rivers supply water to the entire Indus basin irrigation system. These rivers have their origin in the higher altitudes and derive their flows mainly from snowmelt and monsoon rains.

Catchment of Indus is most unique in the sense that it contains seven of the world’s highest peaks after Mount Everest. The climate varies from tropical to temperate. Arid conditions exist in the coastal south, characterised by a monsoon season with adequate rainfall and a dry season with lesser rainfall, while abundant rainfall is experienced by the province of Punjab, and there are wide variations between extremes of temperature at given locations.

Rainfall varies from as little as less than 10 inches a year to over 150 inches a year, in various parts of the country. Climatic change will impact different hydrological parameters, including precipitation snowmelt etc. These changes are results of severe hydrological changes in river flows.

A recent academic study assessed the spatial and temporal changes in hydro availability over different time spans of the year using hydrological statistical analysis of the historic data of different rim stations along the Indus basin. Changes in flow quantity are likely to raise tensions among the provinces, in particular for the downstream areas (Sindh province), with regard to reduced water flows in the dry season and higher flows with flooding during the rainy season.

Estimating water resource under changing flow regimes is important for planning and the operation of water related project. Hydrological parameters are changing under the influence of climate change, which is resulting in the changing pattern of flow regimes. There is large variation of flow at different location in the Indus basin irrigation system. In a recent research study data was analyzed using hydrological software of different rim stations of the Indus River system from 1961-2011.

The monthly mean, maximum, and minimum discharge were computed based on the daily maximum, daily minimum and daily mean discharge. Average daily discharge was based on the arithmetic average of daily maximum and minimum discharge. The seasons were divided into three month and six month intervals. The six month seasons are winter (October to March) and summer (April to September). The three-month seasons are classified as winter (December, January, and February), spring (March, April and May i.e pre-monsoon), summer (June, July and August i.e monsoon) and autumn (September, October and November, post-monsoon). The annual mean is the average of January to December monthly means. Trends were investigated for temporal analysis of six river gauging stations with one station on each river of Indus River system for the period 1961-2010. The analysis was also done for 25, 15 and 10 years time increment.

For the spatial analysis, 6 gauging stations were considered — two stations on each River Indus, Jhelum and Ravi. Trends and variation were investigated by applying the Mann-Kendall test and Sen’s method. The overall analysis indicates that there is more flow variation on a seasonal basis as compared to the annual basis.

It was concluded that the Chenab, Jhelum and Indus rivers’ annual mean, maximum and minimum discharge showed decreasing trends. The rate of decrease was higher during the 1986-2010 time span as compared to the 1961-1985 time span. Interestingly, during the winter seasons discharge is increasing whereas during summer season discharge is decreasing. It is again an indication that climate change is inducing more impacts in the upper Indus basin freshwater sources i.e in terms of snowpack and glaciers.