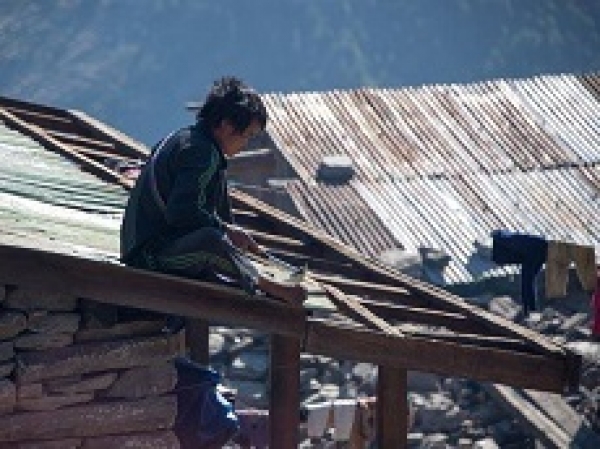 Standing in the midst of the eerie silence surrounded by debris in Thulo Haku, a village in the upper belt of Rasuwa district in central Nepal, one could have easily imagined that the devastating earthquake had hit just a week or two ago, and not close to a year earlier. A fire that followed the quake engulfed 22 houses in one section of the village; a burnt out sewing machine, cracked pots and pans, and the smoke-charred remains of stone walls of destroyed houses lay testimony of what had happened. Only half of the 222 families have returned to the village; the rest are still in camps near the district centre. Ironically, only those who made it to the camps received any relief materials. For the rest of the families, the steep climb to the village, a one-day walk from the road head, was too far away for the government and aid agencies.

One year after the devastating 2015 Nepal earthquakes, many households are still in the earliest stages of recovery. The relief effort was quite rapid and far-reaching, but the next stages of recovery and reconstruction are slow going. Many families continue to sleep in tents and temporary shelters, and eat in their damaged homes; others have been temporarily relocated to camps because of total destruction. The natural disaster brought to the surface many of the social inequalities that already existed prior to the earthquakes - many poor, rural, marginalized and subsistence-based households absorbed much of the impacts.

Some families are no longer waiting for government assistance and are rebuilding on their own. Local residents in many communities are drawing on the tradition of agriculture labour exchange – parma – to rebuild homes and local infrastructure, such as schools, monasteries and temples. Select communities are building back their homes and livelihoods similar to their state before the initial quakes; others are employing new ideas that may help them to be more resilient to future natural hazards. Certain communities are also procuring resources from their own international connections, such as tourists and family members working abroad. This connectivity no doubt assists some areas to recover quicker than others.

There have been many examples of truly altruistic acts, both from Nepali people and the international community, to provide relief at various points, especially before the perilous monsoon and winter seasons. The spontaneous response from groups of Nepali youth was unprecedented, often reaching the hardest to reach areas very early in the relief phase, and much before other assistance arrived. Some of these groups are continuing their support in the recovery phase.

Nepal had a high proliferation of international and Nepali aid organizations before the earthquakes and now there are even more since the natural disaster occurred. The equity involved in the distribution of this aid is uncertain; in a country with extreme mountain geography and an abundance of cultural and linguistic diversity, it is difficult to regulate the amount of aid distributed and to which affected areas. Some settlements receive more than others, the aid not always matching the need.

Recovery as a concept is itself problematic, as there are both tangible and intangible aspects to these processes. Simply following development goals will not necessarily help place-based communities to recover from these traumatic (and ongoing) hazards.

Residents of both rural and urban areas are still experiencing aftershocks and new earthquakes. This makes it difficult to feel that the hazards are no longer a threat. Earthquakes are not the only natural hazard threatening these areas; landslides continue to be a severe perceived risk, as the initial quakes caused many that are still unstable and new quakes and severe weather can trigger more. Many local residents fear that these landslides will continue to cause great damage to humans, agriculture, livestock, private property and state institutions, such as health posts and schools.

Right after the disaster, The Mountain Institute conducted a rapid assessment, which provided modest yet strategic relief support and, at present, continues to support efforts in rebuilding resilient livelihoods in some of the most affected and hard to reach mountain areas.

Portland State University in the USA and The Mountain Institute are attempting to address some of these complexities through research on critical social-ecological transitions during the recovery in two highly impacted districts across four communities with divergent demographics. The “Nepal Critical Transition Project”, supported by the US National Science Foundation RAPID program, aims to create a global model over time that will help better understand how to gauge adaptive capacity for different mountain communities responding to similar natural hazards.

In the meanwhile the villagers in Thulo Haku are still trying to figure out where best to construct temporary toilets. This is especially difficult when they are camping on land that is not theirs, and the water source is so far away. Once the Temporary Learning Centre is set up in lieu of the destroyed school, more families will return to the village. The resources are going to be stretched even more, but they will rely on each other to keep going.

It is up to us to keep their stories alive and to ensure that they are not forgotten.