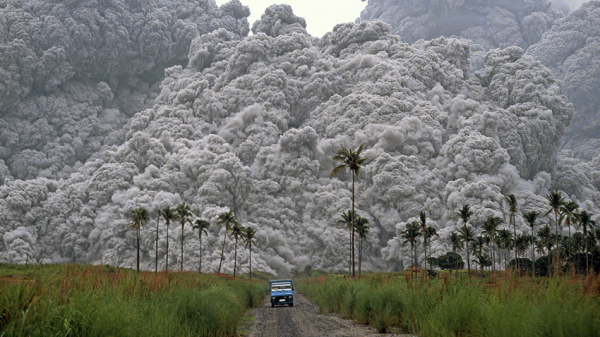 On 14 April, a magnitude-6.2 earthquake struck the Japanese island of Kyushu. Two days later, Japanese officials reported towering plumes of smoke at Mount Aso, a volcano 42 kilometers away from the quake’s epicenter. A small eruption was occurring. Could the distant earthquake have triggered it? Mount Aso has had far bigger eruptions over the past few years, well before the earthquake occurred, so it was probably just a coincidence. But a new study concludes that the idea of so-called far-field triggering is not so far-fetched. Big earthquakes can slosh around the bubbly magma underneath volcanoes hundreds of kilometers away, researchers have found, releasing gases that can increase magma pressure and even lead to an eruption.

In a very general sense, earthquakes and volcanic eruptions tend to be clumped in space and time anyway, because both often occur along the grinding boundaries of tectonic plates in Earth’s crust. Most individual volcanic eruptions are also preceded by tiny tremors, directly underneath, that are associated with the actual movement of magma in underground chambers—an eruption early warning signal that has been monitored effectively by geoscientists.

But scientists have long wondered why big earthquakes are sometimes followed by small volcanic eruptions far from the quake’s epicenter. Even Charles Darwin mused about the connection in 1835, wondering whether Chile’s great Concepción earthquake—which devastated the town of the same name—could have been linked to the eruption of the volcano Osorno he observed only a month later.

More recently, the massive 1991 eruption of Mount Pinatubo in the Philippines was suggestively preceded by a magnitude-7.7 earthquake centered 100 kilometers away the previous year. A 2009 study, by volcanologist David Pyle and his colleagues at the University of Oxford in the United Kingdom, found that eruption rates of volcanoes in Chile significantly increased in the 12 months following any earthquakes of magnitude 8 or above.

Scientists have put forward plenty of explanations for a possible link between earthquakes and volcanoes. These include the idea that shockwaves from the quakes can cause mushy semisolid magmas to liquefy into something more likely to erupt, or even that earthquakes can accelerate the growth of bubbles in magma, which can increase magma pressures. But no one has quite managed to explain why only some volcanoes seem affected by earthquakes, why their responses can take anywhere from days to months, and why the events can vary from tiny bursts of gas to full-blown eruptions.

“Prior models were able to explain some elements, but not others,” Pyle says. He explains that over time, volcanologists have developed a consensus that the potential for a connection between quakes and eruptions is likely determined by the state of the volcano before the earthquake, along with the presence of bubbly magma.

Volcanologists have now proposed a new trigger mechanism: the sloshing of this bubbly magma. Sloshing—the movement of a surface of liquid—is a well-studied issue in engineering. Trucks carrying liquids (such as petroleum) must have specially designed tanks to withstand the sloshing fluid inside. Fractures and roof collapse can sometimes occur in static petroleum storage tanks after the ground motion from earthquakes moves the liquids inside. Inspired by these observations, volcanologist Atsuko Namiki of Hiroshima University in Japan and colleagues wondered what kind of effect earthquakes might have on a different contained liquid—volcanic magma.

To find out, the researchers simulated the effect of earthquake shockwaves on a magma chamber in their laboratory, using a rectangular tank attached to a shaking table. In the place of magma, they used a thick glucose syrup, adding in irregularly shaped bits of plastic to simulate suspended crystals of rock that precipitate out of the magma.

To slosh, a liquid must not have too many crystals, however. It must also have a surface and space to move—therefore sloshing can occur in partly-filled containers—like molten rock in an open volcanic conduit leading to the surface. In magma chambers that are full, however, sloshing may also occur between liquids of different densities, with the lighter liquid giving the other room to move. Such liquid layering is believed to be common in magma chambers, where foamlike bubbly magma overlies denser magma. Accordingly, the team tested the sloshing response of three different “magma” configurations: an open, single-liquid layer; an open, single-foam layer; and a closed, two-layer system where foam overlaid liquid.

For each setup, the researchers conducted a variety of tests. They filmed each tank shaking for 10 seconds under different shaking frequencies and amplitudes, with syrup “magmas” of different viscosities, volumes, crystal contents, and bubble fractions.

Although fluid sloshing in a magma reservoir would not be powerful enough to overcome the strength of the surrounding rocks, the team found a different effect at play. A large increase in sloshing occurred when the shaking of the tank neared the liquid’s resonant frequency—the frequency at which it is easiest to get an object to vibrate. In the foam layers, this deformed the bubbles, smearing them together until they became interconnected—causing the foam to collapse. Thin foams with larger bubbles were more susceptible to collapse. In a real volcano, the escape of hot gases from collapsed foamy magma in a closed reservoir could increase heat transfer to the surrounding rock, increase magma pressure, and even trigger an eruption, the team says.

Furthermore, in the double-layered experimental setup, not only did the foam layer collapse, but the remnant foam mixed with the underlying liquid layer. In a real volcano, such mixing would furnish the lower magma layer with extra crystals and small bubbles, providing new sites at which more gases could then bubble out of the magma. Over time, this would slowly drive up magma pressures, too, causing increased volcanic activity and potentially even a delayed eruption. That may explain how volcanoes could be triggered by earthquakes that happened months before, the team reports this month in the Journal of Volcanology and Geothermal Research.

From their simulations, the researchers explored the earthquake conditions that would cause real magma to undergo foam collapse. They found that for volcanic vents wider than 0.5 meters, low frequency seismic waves would be required—which helps explain why only large earthquakes seem to be capable of triggering volcanic activity. Namiki says that for a typical magma in a 3-meter-wide volcanic tube, a magnitude-7.5 earthquake could cause sloshing-induced foam collapse from as far away as 100 kilometers. In addition to vents, the team proposes that the large (up to around a kilometer in width) spherical magma chambers found at intermediate depths under volcanoes should also be able to resonate with seismic waves, as long as the denser magma layer fills up to a sufficient level in the reservoir.

The study is intriguing, not in the least for its bringing of engineering concepts from outside of geology to help understand how the earth works, says geophysicist David Hill of the U.S. Geological Survey in Menlo Park, California. Hill was not involved in the research, but his work includes a focus on the potential for remote triggering of volcanoes by earthquakes.

The experimental work makes a compelling case, agrees Pyle, who was also not involved in the study. “This is an exciting hypothesis that will be testable,” he notes, explaining that volcanoes believed to be triggered by sloshing should erupt rocks containing chemical and textural evidence to show that they came from the mixing of a bubbly and a denser magma. “This offers a neat resolution to a complex problem.”