How to shelter mountain streams in a changing world 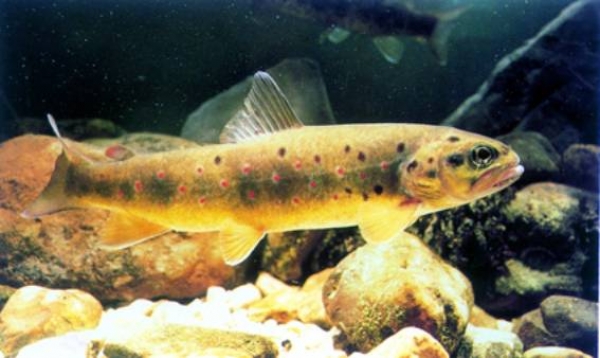 If you’ve ever dreamed about fishing in the West, chances are you’ve pictured something like the South Fork of the Flathead, an achingly beautiful turquoise river tumbling over multicolored pebbles and wending through the deep forest of northwest Montana.

Wade Fredenberg is among the few lucky enough to have grown up fishing there, and his childhood recollections read like a passage from Norman Maclean’s legendary book A River Runs Through It. Fredenberg was a farm kid, and summer mornings, after rising at 4 a.m. to fix an irrigation pipe, he and his Uncle Art would sneak off in a robin’s-egg blue 1959 Chevy Apache to stalk bull trout in the deep pools of the Flathead. Later, stacking hay bales in the hot sun, Fredenberg would remember those moments, imagining that instead of stacking hay he was stacking bull trout as long as his arm, their flanks the color of the river.

Fredenberg is now a U.S. Fish and Wildlife biologist, and the gleaming 20-pound bull trout of his youth are increasingly rare. The trout have been devastated by mining pollution, agricultural runoff and non-native fish, and surviving populations are threatened by rising stream temperatures. Yet while their trajectory from abundance to scarcity is a story we know all too well, Fredenberg and his colleagues believe that new research can turn the narrative around — not just for bull trout, but for other cold-water fish species across the West as well.

If, that is, they can act in time.

It makes perfect sense to Fredenberg and other bull trout aficionados that their favorite species lives in some of the most stunning country on the planet. “Bull trout just don’t live in any place that’s not pretty,” Fredenberg says. “They’re part and parcel of the landscape … the mountains, the cold, clean water. You can’t go anyplace ugly to catch a bull trout.”

Today, you can’t go any place at all to catch a bull trout — at least not if you want to keep it. The species occupies only an estimated 60 percent of its former range in Idaho, Oregon, Washington, Montana and Nevada, and it has been on the federal endangered species list since 1998. Over the next six decades, the amount of habitat suitable for bull trout is expected to shrink by half again as climate change continues to warm streams. The fish can’t survive in water temperatures above 59 degrees Fahrenheit, and over the past 30 years, stream temperatures in its range have warmed an average of 1 degree. (Waterways that still support bull trout hover around 51 degrees on average.)

Bull trout are also an indicator species: As bull trout go, so goes the biological neighborhood. That means other cold-water species such as cutthroat, salmon and Dolly Varden — and the ecosystems they inhabit — are equally at risk.  In 2011, the journal Biodiversity and Conservation published a study that began, “Global climate change is expected to lead to massive loss of global biodiversity in the alpine regions of mountain ranges.” Media and scientific reports have mostly echoed that prediction in the years since.

But Fredenberg, who leads Montana’s bull trout recovery efforts, is a glass-half-full kind of guy. “The bad news is the amount of cold-water habitat that we think is suitable for bull trout is going to shrink by half by 2080,” he says. “The good news is bull trout will persist in that other half.”

To save the species, Fredenberg needs to concentrate on the half that will be viable in the long term; it won’t do much good to spend money improving habitat in streams that will be too warm to sustain bull trout in 25 years. But Montana alone has 170,000 miles of streams. How can scientists tell precisely where trout might survive?

This is where U.S. Forest Service research biologist Dan Isaak comes in — a guy whose brain, Fredenberg says admiringly, “is roughly the size of my desk.” In 2010, Isaak realized that federal agencies and private conservation groups had been independently measuring stream temperatures in the West since the mid-’90s. But no one had ever combined the data, or held it up to climate-change models to determine where, exactly, cold stream temperatures will persist over the next century.

So Isaak and his colleagues set out to do just that. In 2011, they began creating an interactive map that shows historical stream temperatures and projections for the next 80 years, under both “moderate” and “extreme” climate models from the Intergovernmental Panel on Climate Change. The map now covers Washington, Oregon, Idaho, Montana, Wyoming and Utah, and work on Colorado, New Mexico and Arizona will be underway soon. Altogether, the existing maps combine 150 million temperature recordings from 20,000 stream sites, collected by more than a hundred agencies and resource groups. “There’s a ridiculous amount of cumulative data out there,” Isaak says. “We’re just having fun with it.”

Once that was done, Isaak used the maps to identify “refuges” where water will stay cold enough to support bull trout and other species. In 2015, he and four other biologists published a paper in the journal Global Change Biologyintroducing these refuges. Collectively, they call them the Cold-Water Climate Shield.

The cold-water climate shield isn’t as super-hero-y as it sounds. At its core, it’s basically a giant dataset that shows what stream temperatures are, what they’re predicted to be and where they’re most likely to stay cold. The cold-water refuges it identifies won’t necessarily receive special status or protection; they’re simply mapped to help interested land and wildlife managers.

Still, the climate shield (now available online) offer fresh hope for biologists who have fought what seemed like a losing battle for decades. As Isaak analyzed the data, he realized that 90 percent of the identified cold-water refuges were on public lands. Yet of those, only 15 percent were within watersheds formally protected as wilderness or national parks. “That was a pretty surprising result,”Isaak says. “Many of the streams are outside of truly protected areas. They’re in places where you build roads and graze; they're managed landscapes.”

That means the Forest Service and the Bureau of Land Management have lots of opportunities to blunt the impact of climate change on riparian areas, if they act wisely. If a stream has been heavily grazed or logged, for example, simply taking it out of rotation and allowing shade-giving vegetation to grow back may be all it needs. “If the riparian zone isn't providing a lot of shade, a stream can be up to three degrees (Celsius) warmer than it would otherwise be,” Isaak explains. So fencing out cattle or replanting the riparian zone can help cool the water, enabling streams that might be on the thermal edge of bull trout habitat to support the fish in the future.

Now that the cold-water refuges are established, Isaak and his colleagues are adding yet another layer to the maps: a new form of DNA testing that is“revolutionizing aquatic science.” Called environmental DNA, or eDNA, the technique allows scientists to process a water sample for minute traces of skin, fecal matter or reproductive material and instantly determine whether or not a species exists in a particular section of stream.

EDNA affords a degree of certainty and ease that wasn’t possible back when scientists had to lug heavy electroshocking kits to the backcountry and zap rivers to determine whether or not a species lived there. In many remote stretches of stream, scientists have been uncertain about the presence of bull trout. The knowledge that they’re present and that non-native fish aren’t — and that the stream’s temperature is likely to remain relatively stable — makes a strong case for pouring resources into that particular section.

The takeaway from all of this is that, despite 2015’s warm-water-induced fish die-offs, we now know that climate change is unlikely to completely wipe out salmon, trout or other cold-water native fish. The Proceedings of the National Academy of Sciences, the nonprofit organization’s journal, recently agreed to review a paper by Isaak positing that cold-water mountain streams are much more resilient than scientists previously thought, in part because previous predictions (some of which suggested up to 100 percent die-offs) were speculative, never incorporating the level of data that Isaak and his colleagues have processed.

“Collectively, this work is going to turn everything on its head in terms of what people have traditionally been thinking about the vulnerability of some streams to climate change,” Isaak says. “There’s been a lot of fear we’re going to lose these species. Now we can tell people that even in a worst-case scenario, these guys aren’t going extinct.”

Fredenberg finds this reassuring, but it’s not a panacea. For families like his, with deep roots in Montana, bull trout are a kind of religion. And because people care about them so deeply, their recovery has sparked impassioned fighting between tribal, state and federal wildlife managers. Stakeholders tried to pass a comprehensive federal recovery plan in 2002 and again in 2004, but neither plan was finalized.

In the fall of 2015, Fredenberg and others completed a recovery plan. Environmental groups are already contesting it for being too weak, but Fredenberg believes that the cold-water refuge maps will focus the recovery on the places where it will prove most effective, giving bull trout the strongest chance of survival.

And the cold-water climate shield benefits much more than an obscure fish that few people have ever laid eyes on. As the maps expand to cover the entire West, they’re helping scientists who manage other species as well, from salamanders to salmon. They’re a harbinger of hope for all the things that cold clear mountain streams represent: wildness, the shock of jumping into water on a hot summer day, the pleasure of drifting down a river, catching a trout and cooking it then and there, over open flames, the way people have for centuries.