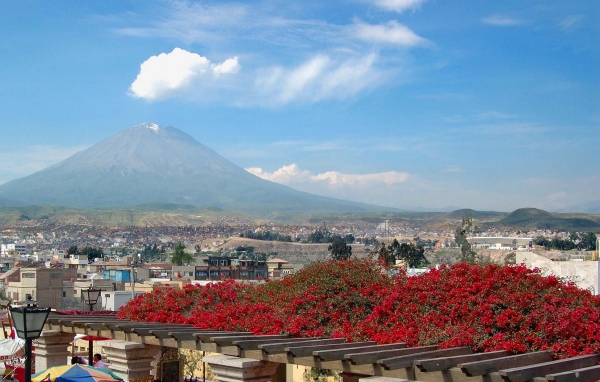 The Peruvian volcano El Misti appears to have woken from centuries of dormancy with signs of increased activity. Note, this DOES NOT mean there will be a volcanic eruption and activity remains within a normal range of an active volcano. However, this is an interesting an opportune time for geologists to study the inner workings of volcanoes to better predict and understand their activity.

Geologists are piecing together an interesting set of data that are indicative of an increase in activity. With the help of seismic monitoring systems, Peruvian scientists will be able to link seismic activity to gas release.

Volcanic eruptions are very hard to predict, however, there are a number of signs that geologists have identified as potential precursors to an eruption. Physical changes on the volcano, such as a slight increase in the surface temperature, an increased release of volcanic gases, ground fissures, and slight tremors are often signs of an increased likelihood of eruption.

El Misti volcano to the right and Arequipa to the left. The photo illustrates the proximity of Arequipa, Peru to El Misti Volcano. The city center of Arequipa lies only 11 miles away from the summit of El Misti. (Credit: NASA)

El Misti has exhibited several of these changes in the past weeks, however it’s very important to note the scale of the changes in activity. The slight increase in activity is not the same scale seen when a volcano eruption is eminent.

El Misti, also known as Putina, is a stratovolcano located near the southern Peruvian city of Arequipa a city just shy of a million people. El Misti lies in the Andean Mountain chain and has been known for past eruptions centuries ago, the last major eruption occurring sometime between 1440 and 1470. The Andes Mountains and its El Misti volcano are a result of the Nazca Plate subducting underneath the South American Plate. This results in mountain building, volcanism, and earthquakes and is a similar process that formed the Rockies in the United States.

The OVS/IG-Peru, an observatory body that tracks El Misti, released a statementregarding recent activity at El Misti. The last time El Misti had a major eruption was in the 15th century and since then has largely laid dormant only releasing gasses periodically. The OVS has six seismic stations to monitor any changes in the seismicity of the area. Through monitoring El Misti, the OVS noted a slight increase in fumarole activity, release of volcanic gasses, and variations in temperature.

Above is a schematic cross section of El Misti taken from The Geology of El Misti Volcano published in the GSA Bulletin. This schematic breaks down various pyroclastic flows, evolution of the caldera, volcanic intrusions, and caldera collapse. This cross section acts as a biography of El Misti and can provide clues into how a volcano changes through time.

For instance from Misti 1 stratovolcano to the Misti 4 summit cone the volcano has migrated to the NNE through time and several eruptions. Each successive volcanic eruption builds on the older eruptions, much like if you were to periodically drip melted wax on a cone. Identifying the sequence of eruptions can lead geologists to clues as to what the volcano will do in the future and hopefully help to save lives.