Addressing Mountains in a Peruvian Village 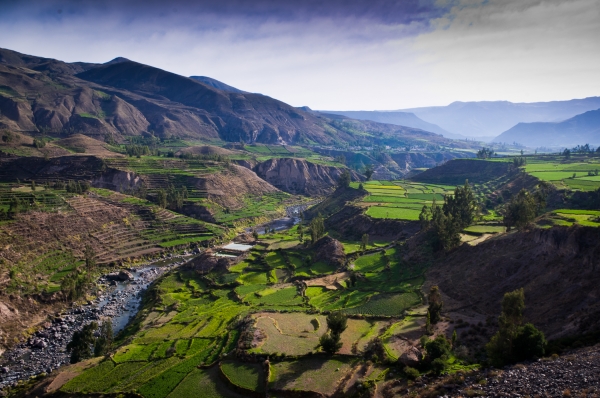 From 2010 to 2012, Astrid Stensrud, currently a post-doctoral researcher at the University of Oslo, researched climate change in the Colca Canyon of southern Peru, as part of the project “From Ice to Stone” from the Department of Anthropology at the University of Copenhagen. With climate change, water insecurity has caused new uncertainties for farmers in this part of Peru. For her article “Climate Change, Water Practices and Relational Worlds in the Andes,” Stensrud researched water practices to provide an anthropological perspective on how local people adapt to climate change. The research is based on ethnographic material generated during eight months of fieldwork in various villages of Peru, located at different altitudes in the Colca-Majes-Camaná watershed. Examining climate change from a social science perspective can complement natural science perspectives, because it allows for an analysis of the integrated relationship between infrastructure, technology, material objects, and culture. Taking this connected web into account, water serves as a link to join every part, including not only natural factors but also social and cultural ones. Stensrud’s research shows that these aspects are connected, offering locally-based solutions to address the current water crisis caused by climate change.

GlacierHub: As an anthropologist, why did you decide to focus on the intersection of culture, water security, and climate change— and what does looking at culture add to the climate change conversation?

Astrid Stensrud: Climate research has been largely dominated by the natural sciences, but social anthropologists ask different questions and have the advantage of doing long-term, in-depth fieldwork among people affected by climate change and declining water supplies. Anthropology can contribute by drawing attention to cultural values and everyday politics that shape climate-related knowledge and responses to environmental change. Understanding climate change is not only about melting ice and changing precipitation patterns. In order to understand how climate change affects lives, it is necessary to look at stories and narratives, imaginations of the past and anticipations of the future, and knowledge, values and worldviews that inform people’s actions and engagements with the environment.

GH: Why did you choose the Colca Valley in Peru as the site for your research?

AS: I was invited to join a research project called “From Ice to Stone” at the University of Copenhagen for two years in 2010-2012, and it was led by anthropologist Karsten Paerregaard who has been doing ethnographic research in Colca Valley since the 1980s. Since this is an arid area, water access and irrigation have always been crucial issues in Colca, and these concerns are now exacerbated because of climate change. In my current position as a postdoctoral researcher in the research project “Overheating: the three crises of globalization” at the University of Oslo, it was a natural choice to return to the Colca-Majes watershed in order to continue the research on perceptions and responses to climate change and neoliberal economic policies.

GS: In the course of your research, what was your biggest surprise?

AS: I was surprised to find that issues of water and climate change were so visible and present in conversations among people. I was expecting to patiently dig for information, but when I arrived to Chivay in March 2011, water was discussed in private and public arenas on an everyday basis, and climate change was a term that was used extensively. Later on, I realized that this was not necessarily a good thing, for example when the threat of climate change is used to make poor farmers pay for licenses for water use rights. Climate change was also used as an excuse by a mining company in their response to farmers’ complaints about disappearing water sources nearby a mining site; they claimed that the mine was not to be blamed, because the culprit was global warming.

GS: You use the word “cosmopolitics” in your study. What does it mean, and how does that word help explain water issues in the Colca Valley?

AS: Here I am inspired by the anthropologist Marisol de la Cadena, who has used the term “indigenous cosmopolitics” – or a “pluriversal politics” – to describe a politics that would allow for disagreements on the definition of nature itself, and accept nature as multiplicity. It contributes to my argument that different water practices enact multiple versions of water, for example relational water and modern water, and that a stronger ethnographic focus on material practices can contribute to a more nuanced understanding of climate change effects and water politics. In Colca Valley, it might for example say something about why relating to mountain-beings is not “indigenous religion,” but part of communities’ responses to water scarcity.

GH: Colca Valley is deep. Are the glaciers visible from the villages? Does the fact that people do (or don’t) see them regularly influence the way that they think about them?

AS: Yes, the Colca River runs through the deep Colca Canyon. However, the villages are not located at the riverbank, but further up in the mountainsides, and they have very clear views of the mountaintops that used to be covered by glaciers – permanent snow and ice – but which now are black. When it has snowed and the mountains are white, people comment upon their beauty. The visibility of the mountaintops makes the absence of the glaciers very dramatic.

GH: At GlacierHub, we focus on glaciers. But perhaps we think about them more than the people who live near them. Did glaciers come up spontaneously in conversation, or only if you asked about them?

AS: When explaining the topic of my research for people, or when asking questions about weather and water, the first thing that many people mentioned was the lack of snow on the mountaintops and the permanent ice that had disappeared, causing dry pastures and other problems. So I did not have to ask specifically for the glaciers for people to tell me about them. Their visibility and their importance for water provision (at least in some of the villages) made their disappearance into a matter of concern for farmers.