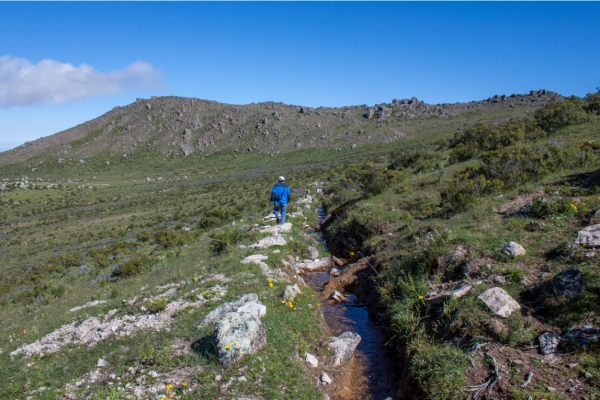 A revival of pre-Inca water technology in the mountains of the Andes is set to keep taps flowing in the drought-affected Peruvian capital, Lima. Grouting ancient canals, it turns out, is a far cheaper solution to the city's water crisis than building a new desalination plant.

Lima is one of the world's largest desert cities and relies for water on rivers that flow out of the Andes. But those rivers diminish to a trickle during a long dry season, leaving the population of almost 9 million with intermittent water supplies.

Now the city's water utility company, Sedapal, has decided to invest in conservation projects in the Andes to keep the rivers flowing and taps running. And researchers have discovered that the most cost-effective way is to revive a system of ancient stone canals, known locally as amunas, that were built in the Andes by the Wari culture between AD 500 and 1000, centuries before the rise of the Incas.

The canals captured water from rivers in the mountains during the rainy season and took it to places where it could infiltrate rocks that fed year-round springs further down the mountains, so maintaining river flow during the dry season.

The amunas fell into disrepair long ago and had been largely forgotten. In most places, their water now quickly returns to the rivers. But hydrologists such as Bert De Bièvre of CONDESAN, a Lima-based non-governmental organisation behind the project, say re-grouting the lined stretches of the canals with cement would allow them to resume their original purpose.

"The idea is to build a timelag into the hydrological system, delaying water run-off for weeks or even months until it benefits water supply in the dry season," De Bièvre says.

SEDEPAL has now decided to fund the plan by taking 1 per cent from its water charges for the next five years. The costs are estimated to be $23 million.

Holding back the flood

Lima has water shortages for seven months of the year but during the other five months, the Rimac, Chillon and Lurin rivers, which pass through Lima on their way to the Pacific Ocean, regularly cause floods and landslips. Keeping floodwaters back for the dry season makes obvious sense.

Research into the hydrology of individual canals is still in progress. "We have been injecting ink into the canal water to see where it resurfaces," says De Bièvre. But he is confident that the project could revive 50 amunas, mostly in the Chillon catchment.

According to a study by De Bièvre and Gena Gammie, a water specialist at Forest Trends, an NGO based in Washington DC that is backing the project, that should be enough to increase water supplies to Lima by 26 million cubic metres, and reduce the city's current water deficit in the dry season by as much as 60 per cent.

According to the study, other green investment initiatives that could keep water on the mountainsides for longer include reviving forests, wetlands and ancient agricultural terraces, and restricting livestock grazing on upland pastures. But the study found that reviving amunas would be by far the cheapest option, costing less than a hundredth as much as water from the city's new desalination plant.