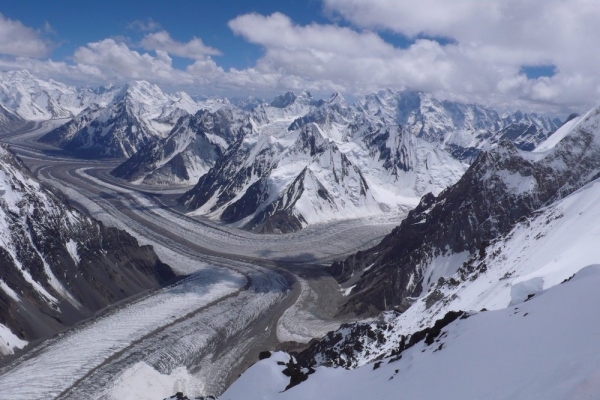 ISLAMABAD: Glaciers across the world are seriously threatened by climate change and global warming, warned international experts in a recently-released report.

The team of scientists came together as part of the Mountain Research Initiative, a global effort funded by Swiss National Foundation. Scientists from Pakistan, China, US, Canada, UK, Ecuador, Italy, Austria and Kazakhstan took part in the study of mountains and glaciers, which was also published in Nature Climate Change Journal recently.

After finding evidence that places at higher elevations could be warming up much faster than previously thought, experts have called for urgent and rigorous monitoring of temperature patterns. The report has further cautioned that the behaviour could accelerate many environmental changes such as melting glaciers and vegetation change.

The study further reveals that mountainous regions are warming up more rapidly than surrounding regions, primarily because of the Tibetan Plateau where temperatures have risen steadily over the past years and the rate of change is speeding up. It also found out variations in general climate warming at elevations. For instance over the past 20 years, temperatures in areas above 4,000 meters have increased nearly 75 per cent faster than that in areas below 2,000 meters.

Records of weather patterns at high altitudes are extremely sparse. The density of weather stations at height of more than 4,500 meters is roughly one tenth of that in areas below that elevation as found by the researchers.

Around 5,000 glaciers are located in Pakistan. Long term data which is crucial for detecting patterns does not exist for areas above 5,000 meters across the world, thus leaving out K2 (8,611m) and several other mountain peaks in the country. The longest observations above these elevations are of 10 years on the summit of Kilimanjaro in Tanzania.

Experts are of the view that rising temperature at glaciers could cause enormous floods thus negatively affecting agricultural production, food security and national economy. This would ultimately increase poverty and insecurity in the region.

“Pakistan is one of those countries which are most vulnerable to negative impacts of climate change.  The mountains in the country are also warming up rapidly compared to areas in the rest of the country. The social and economic consequences of this could be serious. We could see our glaciers disappeared much sooner than previously thought leading to dramatic change in hydrologic regime of River Indus,” Global Change Impact Study Centre Senior Scientific Officer Dr Ziaur Rehman Hashmi told The Express Tribune.

The study suggests improved observation techniques such as satellite-based remote sensing and climate model simulations to get a true picture of rising temperatures in mountainous regions. It also emphasised for efforts to find, collate and evaluate observational data from across the world.