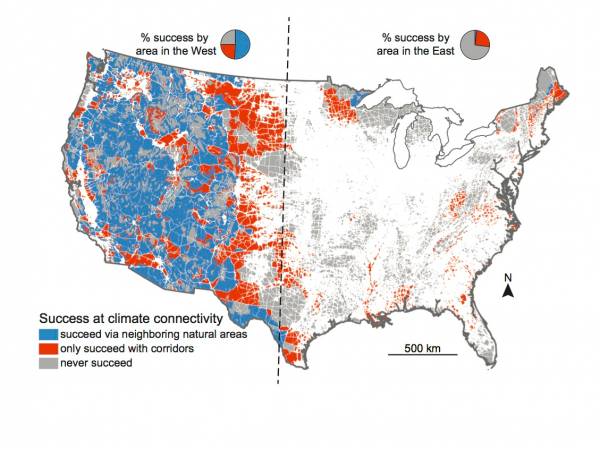 Over the next century, as temperatures climb, precipitation patterns shift, and sea levels rise, there will be a dramatic altering of the American landscape.

Faced with these changes, some plants and animals will either have to adapt or flee to new, colder homes in order to survive. In fact, a number of species have already begun shifting their habitats, with most moving towards the poles or to the higher elevations of the mountains. Some animals might even need to move many hundreds of miles over the next half-century.

But, the untouched forests, deserts, mountains, and parks that these species call home are fragmented and divided by human development, such as cities, agriculture or roads. This, more often than not, leaves species no escape route if climate change continues to make their habitats inhospitable.

A new study , published at June 13rd in the journal Proceedings of the National Academy of Sciences (PNAS), found that only 41% of today's natural areas are sufficiently connected to allow plants and wildlife to remain in their optimal climate.

The situation is even more dire in the eastern US: only 2% of natural lands provide the kind of connectivity needed for species to flee, compared to 51% in the west. Not only is the east more densely urbanized, but it also has less of a climate gradient due to smaller, older mountains. The west, in contrast, has much taller mountains (providing a bigger climate gradient) and much bigger swaths of untouched wilderness.

Species need "little plant and animal highways, paths that make it easier to move and disperse over the landscape," Jenny McGuire, study author and research scientist at the Georgia Institute of Technology's School of Biology, told Business Insider.

These paths - called habitat corridors - would be one way of helping species adapt to a warming world. They could be created through the restoration of forests, bogs, and other areas in order to connect up the fragmented wildlife refuges, allowing plants and animals to shift or migrate if they need to.

The PNAS study findings suggest that creating corridors could improve the connectivity by as much as 65% nationwide, boosting the chances of survival of more species.

This would be especially important in the Southeastern part of the US, where such corridors could provide escape routes to northern climates for a variety of species, including amphibians such as woodland salamanders, which need cover to survive.

Without corridors, McGuire said, extinction will be higher and a lot of populations of species will be lost.

Habitat corridors have already been created in a few places. Wyoming has begun to invest in wildlife overpasses , researchers are working on digging tunnels for amphibians under busy roads in New York State, and North Carolina is looking into connecting bog land.

"An important contribution of this [PNAS study] is that it helps us, ecologists and managers, prioritize limited funding for research and habitat restoration efforts, by focusing on areas of the US where it will have the biggest impact on improving connectivity of habitat corridors for species," Dr. Nate Nibbelink, associate professor of spatial ecology at the University of Georgia, told Business Insider. He was not directly involved in the study.