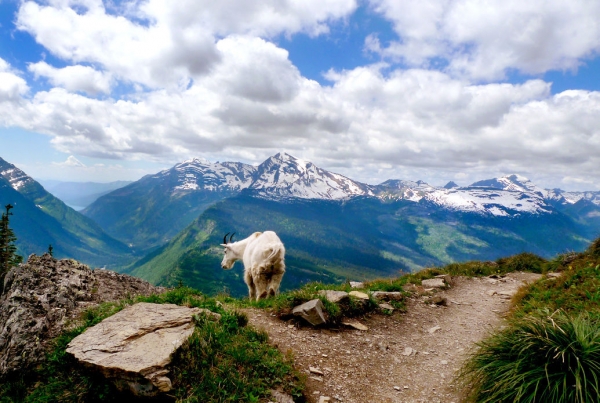 Two Missoula researchers have punched a slight hole in the prevailing wisdom that wildlife in the world’s mountainous regions might more easily overcome climate change than their flatland counterparts because they won't have to go as far to get to a suitable environment.

Many scientists believe, for example, that animals and plants in these areas can simply move to higher elevations and thrive if their current environment warms too much, unlike animals that live on the vast plains.

However, Solomon Dobrowski, a University of Montana landscape ecologist, and Sean Parks, a scientist at the U.S. Forest Service’s Aldo Leopold Research Institute in Missoula, recently published a study that shows that organisms in mountainous environments actually may face more difficulty because of complex topography.

In other words, they would would have to move through lots of warm valleys and cold peaks where they might not be adapted to survive. Organisms in flatter environments may have to travel longer distances, but they can simply move north to escape the effects of climate change without having to go through potentially life-threatening hot or cold spots.

The duo cited a 2005 report from Island Press that found mountains support roughly a quarter of the globe’s terrestrial biodiversity and contain about a third of all the world’s protected areas. Mountains are also home to almost half of all biodiversity “hotspots” where lots of different species congregate.

That’s because the complex landscapes within these regions create diverse climates near one another. However, species in one climate aren’t necessarily adapted to live in a climate that may be right next door. These varying environments could spell disaster for a non-adapted organism trying to flee to a cooler place in a warming world.

“It’s not enough to just measure how far an organism will have to move in order to keep up with climate change,” Dobrowski said. “We also need to look at how much organisms will be exposed to dissimilar climates along the way. Once we do that, we find that even short movements in mountainous areas expose organisms to large climate differences. This may prevent plants and animals from being able to maintain a suitable climate as the Earth warms.”

Parks said they set out to look at alternative ways of evaluating vulnerability to climate change.

Typically, scientists have measured how vulnerable a site is to climate change by estimating how far organisms that live there need to move to maintain a consistent temperature as the Earth warms. Because mountain regions contain such diverse environments compared to flat regions, many scientists believe that organisms in mountain regions would only have to travel a short distance to find safety.

“We wanted to measure not only how far away these different climates were but how much climactic variability would be encountered,” Parks said.

“If there were several warm valleys or cold mountaintops between us and where we want to get, there is quite a bit of climatic variability that would be encountered for any potential organisms attempting to migrate in response to climate change," Parks said. "What we found is that mountainous regions are a little bit more vulnerable than previous studies have suggested.”

The study shows that the path an organism might have to travel to get to a suitable environment in a mountainous region might actually be longer because they have to go around spots with unsuitable temperatures.

Essentially, the two found that simply measuring the distance from one area of suitable climate to the next doesn’t account for the resistance organisms will encounter as they traverse areas with very different climates.

Parks said their approach was not geared toward any specific organism, and he is quick to point out that their method shouldn't replace any other method. Many studies have been conducted to determine certain species' vulnerability to climate change, and this new data can be a useful tool for putting it into context.

"We are trying to emphasize that this approach we took should not replace anything else. It's just another way to look at it," he said.

The study, “Climate change velocity underestimates climate change exposure in mountainous regions” was recently published in the Nature Communications and is available online at nature.com/ncomms/2016/160801/ncomms12349/full/ncomms12349.html.