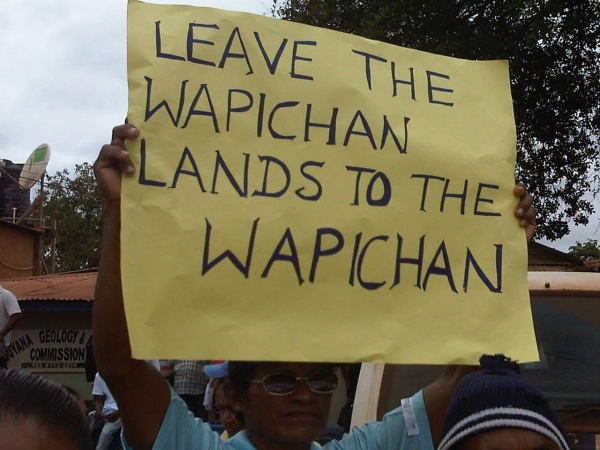 The Wapichan people in Guyana, South America, have received the prestigious Equator Prize from the United Nations Development Programme (UNDP) in recognition of their prolonged efforts to legally secure their ancestral lands and conserve extensive rainforests and diverse wildlife habitats in the South Rupununi.

In common with many indigenous peoples across South America, Wapichan communities are vulnerable to land grabs and marginalisation because they lack secure legal title over much of their traditional lands. Wapichan territory is threatened by mega road projects and external plans for logging, mining and agribusiness development. Right now, a gold rush in the South of the territory is causing water pollution, deforestation, social disruption and damage to traditional hunting and fishing grounds.

In response, Wapichan communities and their representative body known as the South and South Central Rupununi District Toshaos Council has been assisted by local organisation South Central Peoples Development Association (SCPDA) in stepping up their collective efforts over the last 15 years to get the full extent of their traditional land recognised through innovative work to collect evidence in support of their land claim. Community mappers worked over more than a decade to make a digital map of the entire territory and 17 Wapichan communities worked for 5 years to draw up a ground-breaking plan for caring for their territory, which includes a proposal to care for 1.4 million hectares of pristine rainforest for the benefit of their communities and the world.  Elizabeth Andre, daughter of the late leader Henry Winters who submitted the Wapichan land claim to the Amerindian Lands Commission in 1967, notes:

"The forest is special to us. She is like our mother. Our forest provides cool air in our homes in the nights as the days are getting hotter. We do not want the government or companies to do away with our forest. We need the same forest that our former leaders identified in our territory to keep us and our children and grandchildren. This is why we are working together still today for our Wapichan territory and our mother forest…"

Since 2013, Wapichan villages have been developing a local system for watching over their forests, savannahs, mountains and wetlands. Information is collected by local monitoring teams using smart phone technology. They have also built a community-owned drone with support from the NGO Digital Democracy that can take high resolution pictures of forest loss, wildfires and illegal resource use.

SCPDA has now gained international recognition for its sustained and highly innovative work. Its projects in support of community mobilisation to secure land rights, protect rainforests and promote sustainable livelihoods came top in a list of over 1000 Equator Prize nominations made to UNDP seeking awards for community projects worldwide:

“After years working to advance our land rights, winning the Equator Prize means a lot to us. So often the work of indigenous peoples is invisible. Governments and world leaders meeting in the Paris Climate summit need to acknowledge indigenous peoples’ contributions. They must make commitments to legally recognise our lands as part of global and national strategies for respecting our rights and mitigating climate change.” [Nicholas Fredericks, SCPDA Projects Coordinator and Village leader (Toshao), Shulinab Village]

Tony James, a charismatic Wapichan elder who initiated much of the mapping and land use planning work together with other community leaders in the 1990s, said:

All of our villages embarked on this long road seeking legal recognition of our lands with passion and commitment. Our women, youths, elders and children are fully involved in our efforts and there is unity among all of our villages. We never did all this work to win any sort of competition: we did the mapping and other activities because we love our land and we need to protect our forests and resources for our children and grandchildren. The Prize is a bonus. Its gives weight to our case. If governments are serious about stopping climate change, then they must legally secure the land rights for indigenous peoples in order to meet their obligations under international treaties and to ensure effective national actions to protect the climate and the world’s remaining forests.

The Wapichan and SCPDA representatives are now travelling to the UN climate summit in Paris to receive the Prize. They are calling on world leaders to take more effective actions to recognise indigenous peoples’ land and territorial rights as a core part of national and global efforts to tackle deforestation and climate change.