Why the humble Peruvian potato is so appreciated in Kazakhstan 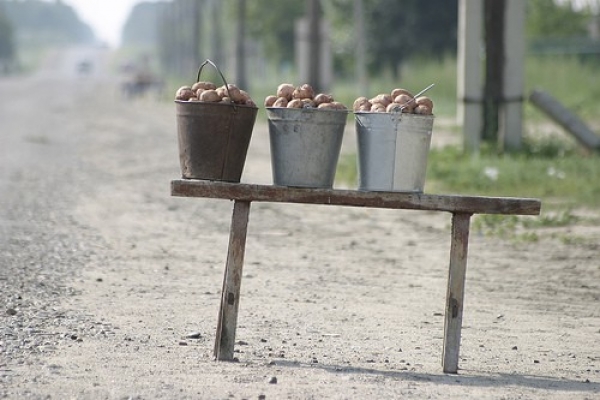 The people of Kazakhstan, an Asian country as large as all of western Europe, eat more than 110 kg of potatoes a year per person. The custom of eating potato has been handed down from father to son since the tuber became popular there in the 19th century. But why do they consume more potatoes than the people of Peru and Bolivia, territories today considered the crop’s center of its origin and diversity?

After Russia, Kazakhstan is the second largest country of the former Soviet Union. It has no outlet to the sea and the land is barren. The country is flat in the west but has high mountains rising in the east. There are over a hundred ethnic groups living there, with 28 percent of the population of Russian origin.

Its climate is subject to extremes of cold winters and hot and dry summers, which limit the productivity of many crops. Rainfall is variable and uncertain, and the territory is subject to periodic droughts. In addition, part of the arable land is affected by salinity, making it less fertile, further damaging farming.

Kazakhstan is a sparsely populated country (17 million inhabitants) that has grown at an average annual rate of 8 percent over the last decade. Its huge reserves of oil, gas, coal, copper, gold, zinc, chromium and silicon are putting the nation in the foreground of business maps around the world.

The Odissey of the Potato

The potato’s story begins about 8,000 years ago near Lake Titicaca, which sits at 3,800 m (12,500 ft) above sea level on the border between Bolivia and Peru in the Andean mountains of South America.

There, research indicates, communities of hunters and gatherers who had first entered the South American continent at least 7,000 years before, began domesticating wild potato plants that grew around the lake in abundance.

Although there are no written records of the first entry of the potato to Europe, evidence suggests an introduction into Spain around 1570.

The spread of potato to Asia was delayed by problems of adaptation of this plant that had been cultivated for millennia in the Andes. It took 150 years before tubers were appropriate for the long days of the European summer.

However, these tubers were from genetically similar varieties, which made them very vulnerable. They were so vulnerable that any pest or disease could easily attack them. And that ‘s what happened. In 1844-1845, a pathogenic mold causing the disease now known as late blight ravaged potato crops throughout continental Europe, from Belgium to Russia.

The situation led breeders in Europe and North America to produce many new varieties, which European farmers, including those in Russia where the potato received the nickname “devil’s apple”, began growing on a large scale.

The Odyssey of the Potato was a traveling exhibition sponsored by theInternational Potato Center (CIP, for its initials in Spanish) during the celebration of the International Year of the Potato in 2008. This storymap shows the story related to the discovery of the potato by Spaniards and its introduction to Europe

The potato in Kazakhstan

After the breakup of the Soviet Union in 1991, the former republics of the USSR had to reorganize and restructure according to changes in the new political and legal environment.

This renovation included the potato industry in Kazakhstan, whose dramatic changes in production practices and productivity have somehow compensated for a decrease in acreage.

Kazakhstan is the largest potato producer in Central Asia and the Caucasus and the second in terms of productivity. According to FAO, in 2012 Kazakhstan produced a little more than 3 million tons with a yield of 16 kg per hectare. Most of the seed used is of Dutch and German origin, with a small percentage represented by local and Russian varieties.

The potato in Kazakhstan is a very important staple and cash crop; it is so popular that it is called the “second bread”.

The potato (Kartofel in Russian; картопen in Kazakh) is highly appreciated by the people of Kazakhstan, mainly because:

The potato has the potential to contribute to poverty reduction because it is mainly produced by small farmers who are among the poorest groups in the Central Asia and the Caucasus.

Any improvements to be made on the crop will positively influence their welfare.

For this reason, the National Agricultural Research Systems (NARS) in the region began to introduce and experiment with materials to produce potato seed locally and reduce the country’s dependence on imports.

The results of this process are: the first virus free potatoes harvested in Kazakhstan, the selection of drought tolerant potato varieties promising for Central Asia and the recent release of a variety low in calories but rich in vitamins.

The Kazakh Food and Potato

Cuisine of Kazakhstan, Uzbekistan and Kyrgyzstan are so connected that they share many dishes. That’s not surprising if you consider that for nearly a century they shared destiny within the Soviet Union, and for many centuries previous, the caravans of the Silk Road brought recipes from one country to another.

Kazakhstan’s cuisine is based on lamb and horse meat and milk products, and reflects the customs of nomadic peoples and influences from the Middle East.

The humble potato is an ingredient in three of the most representative dishes of the country: beshbarmak, lagman and Nauryz kozhe.

The national dish is beshbarmak, which in Kazakh means five fingers because it is traditionally eaten with hands. The dish contains boiled noodles in sauce of fatty sheep meat, potatoes (optional), carrots and onions. It Is served on special occasions.

Lagman are hand-made noodles served in a stew of oil, usually with meat, onions, peppers, potatoes and some spices on top. They belong not only to soups but also to the main course.

This Nauryz kozhe is a stew which must have seven different ingredients, mostly grains and potatoes, but also a small amount of meat. There are seven ingredients because it is a number that “brings luck and happiness”.

The potato has rightly been called, the vegetable that changed story. From its origins in the Andes to its place at the vanguard of the fast food revolution, it has provided both the spark and the fuel for centuries of social change. In conquering the world, the humble spud has been banned and then lauded, cursed and then praised, feared and the loved. Wherever it goes, the potato patienly does its job until humanity welcomes it into its home and its heart.” —Robert E. Rhoades, The Potato Treasure of the Andes: From Agriculture to Culture.

Author
Jorge Luis Alonso G., is a writer and blogger based in Argentina. He specializes in writing white papers for agricultural organizations. For 15 years he has distributed information on the potato crop through Redepapa. Currently he is a correspondent for Potatopro.
External Links:
medium.com | by Jorge Luis Alonso G.
Work regions:
Latin America
Mountain Ranges:
Tags:
potato | Perú | Kazakhstan