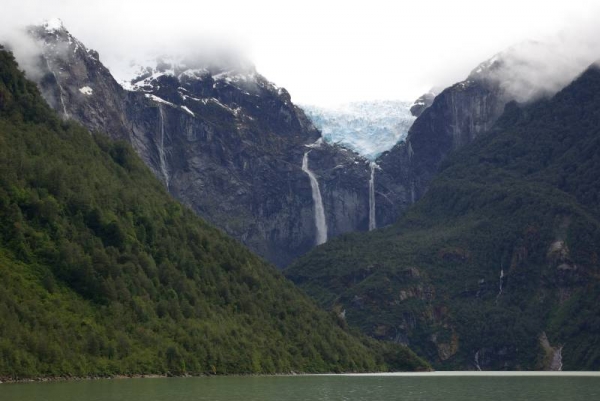 A recent incident shows the importance of a social movement in shaping a glacier protection law in Chile. Representatives from indigenous and environmental groups testified in April that the draft law— which designates glaciers as protected areas and limits activities that can damage them— has glaring loopholes that would leave  glaciers and the people who depend on them unprotected. They urged the Commision onHuman Rights and Indigenous Peoples to review the proposed law.

The group, the Coordination of Territories in Defense of Glaciers, is a coalition of organizations from northern and central regions in Chile with glaciers. According to an article posted by the Latin American Observatory of Environmental Conflicts (OLCA), the group’s message was received positively by representatives on the commission, which is part of the lower house of the Chilean legislature. The article was signed by several groups advocating for glacier protection, including the Coordination of  Territories. It was posted by the indigenous media blog Mapu Express as well.

According to the article, advocates for communities living alongside glaciers argued that these communities need to be able to secure their water rights in order to survive. Central and northern areas are the most dependent on glacial waters, and glaciers there would be left vulnerable by the law, advocates argue. They also point out that Chile is currently experiencing a prolonged water shortage.

The draft law is currently under review within the Environment Ministry, and the group asked the Commission of Human and Indigenous Rights to review it.

These advocates stated in an earlier post that industry interests have ensured that “Ningún glaciar quedará protegido”: Not one glacier would be protected. The groups are aligned against mining interests, including the state-owned copper company CODELCO and Consejo Minero, a mining industry group. Representatives on the committee acknowledged the role of mining interests in opposing glacier protection; Deputy Roberto Poblete, who sits on the committee, singled out Barrick Gold, a large mining company that operates in Chile, as an example of the forces at work against the law’s efficacy.

Conflict between mining groups and local activists are taking place in other parts of the world as well, including Kyrgyzstan, as GlacierHub recently covered. The issue has also been picked up in American popular culture, on the TV show Madam Secretary.

Chileans have been pressing their government to protect glaciers in law since 2014, when plans were announced to expand Chile’s largest mine, further impacting glaciers. Greenpeace started an advocacy campaign called “Glacier Republic” in which it jokingly claimed to declare Chile’s glaciers an independent country. Greenpeace’s efforts combined with those of a handful of Chilean politicians and grassroots activists. A march of two thousand people called for Chilean President Michelle Bachelet to protect the glaciers in law. Discussion of glacier protection in the law followed, and a group within Chile’s legislature advanced a bill to protect glaciers. GlacierHub reported in 2015 that though progress was made in bringing a law to the table, there was uncertainty in how far it would go to protect glaciers.

The Chilean groups testified last month that the draft bill did not go far enough. In January, advocates detailed that the law’s impact would be severely limited. That’s because the law would require that a glacier be in a “Pristine Region,” a park or national reserve, or part of a declared Strategic Glacier Reserve to be protected. They wrote that there are several loopholes that could prevent glaciers that fall under these conditions from being protected. One of these loopholes is a legal provision that parkland can be opened to economic development if permission is granted by the government.

These advocates further state that most glaciers would not qualify for protection under these three categories. Small glaciers, found in the northern regions, and types of terrain that function alongside glaciers, such as permafrost, are vulnerable, they argue. They also argue that mining activity in these excluded areas would lead to the fragmentation of glacial ecosystems. Also, the law would not prohibit mining that results in suspended dust or underground activities, which are the most dangerous for these water sources. According to the advocates, at the meeting last month, they argued that the law legalizes and standardizes the destruction of glaciers, rather than protecting them.

Estefanía González, a spokesperson for Greenpeace, in an article in the online newspaper El Mostrador, stated that Greenpeace has remained active in advocating for a strong glacier protection law, and issued a call for attendance at a march for the Defense and Restoration ofWater and Lands in Temuco, Chile to denounce it. The march was held on April 23, and was attended by an estimated 4,500 people.

González echoed the indigenous groups’ comments and also drew parallels to other nearby countries who were fighting similar battles. In Colombia, activists are fighting to protect tundra as a water resource, and in Argentina, where Barrick Gold, a mining company, is consuming 9 million liters of water per day in the zone where a water emergency was declared, Gonzalez stated in El Mostrador.

Members of the Council expressed their sympathy with the message. The advocates wrote. Deputy Gabriel Boric described access to water as an inalienable human right. However, the representatives pointed out that they fought an uphill battle against big business interests that had a strong hold on Chilean politics. Deputy Hugo Gutiérrez, from the Communist Party, compared the law with the Fisheries Act, which was originally designed to promote sustainable use of marine resources but actually ended up supporting large fishing companies while disadvantaging independent fishermen.Protests erupted in 2015 over this issue.

Council members pledged to do their utmost to take the glacier law under review to examine its human rights impact, even in the face of political and industry pressure. The difficulties which they acknowledge shows the obstacles faced by legislation that favors environmental protection, in Chile as in other countries around the world.