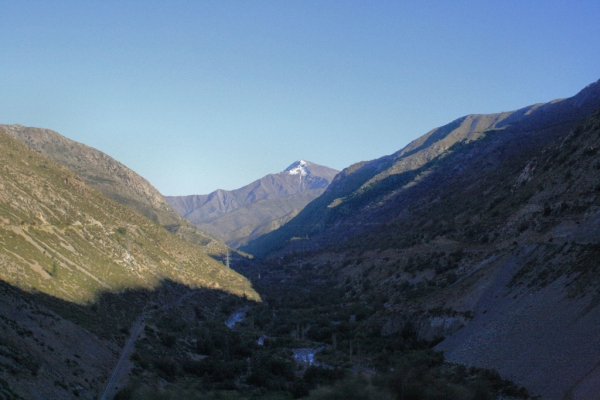 Glaciers are an important factor for the success of agriculture in valleys in Chile. According to a recent study in the International Journal of Water Resources Management, the presence of glaciers at high elevation is one of the distinguishing factors that led to different degrees of agricultural development through irrigation among four valleys in Chile.  More glaciers were present in the higher peaks of the Andes, which are located to the east of the valleys they studied.

Author Peter Frederiksen documented the expansion of irrigation and changing land-use patterns in the valleys through in-person and archival research between 2000 and 2014. The study looked at the Petorca, La Ligua, Putaendo, and Aconcagua valleys of Central Chile, which is a major fruit-growing region. The southernmost valley, the Aconcagua Valley, had the greatest water resources, measured in streamflow, while the northern valleys had less. The difference was correlated with altitude, which allows for the presence of glaciers, and a larger catchment area, Frederiksen writes.
More water meant greater development of new fruit orchards, since irrigation was aided by the availability of surface water. While irrigation and fruit plantations expanded in all four valleys during the 14 years, there were differences in the amount of irrigation and the patterns of water use and allocation, with Aconcagua Valley having the most expansion of agriculture.

In addition to studying changes in patterns of natural resource availability and agricultural development, Frederiksen shows that who controls water and land resources has changed with globalization. He found, through interviews with local residents and stakeholders, that large companies and wealthy individuals are the main developers of new irrigation. The pressure of new irrigation increases the demand on water resources, and Frederiksen documents how development plans for fruit export led by wealthy and powerful influences outmatched water management groups that had self-organized.

Looking to the future, Frederiksen identified two trends that will impact irrigation development: climate change and the continued expansion of water resource development. Increased heat in the Andes will melt glaciers, which have already been retreating over the 20th Century. While snowpack is the main contributor to streamflow, glaciers become more important to water supply during dry years, such as La Nina years, when precipitation is usually low. Glacier meltwater thereby reduces the year-to-year fluctuations in water supply.

The government plans to meet the growing needs of fruit irrigation with future dams, improvements in irrigation including canals and use of drip irrigation, and harvesting of groundwater. But if glaciers melt and precipitation decreases, these steps might not be enough. Frederiksen writes, “The two opposite tendencies – the policy and plans for continued irrigation development, and climate change – define uncertain futures.”

Frederiksen’s study is motivated by the need for “wise, intelligent, and informed strategies” for bringing together water institutions and agents with the goal of protecting water resources, in the face of challenges including climate change, globalization, and development of water resources in more parts of the world. The study puts forward a model for understanding water resource development that is useful, Frederiksen writes, in overcoming confusion and barriers to implementation in water resource management.

This story originally appeared in Glacierhub