A Glacier Makes a Cameo on ‘Madam Secretary’ 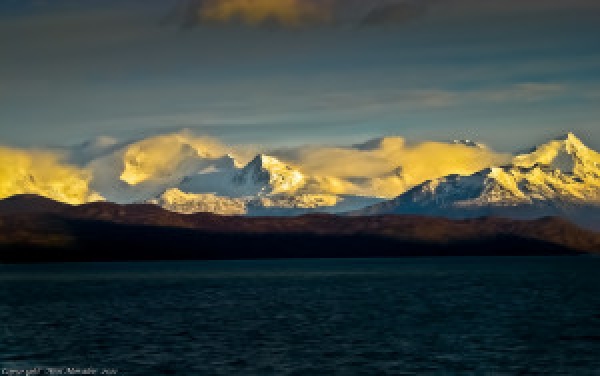 Glaciers made an unusual appearance on a primetime American television network last month: the television series Madam Secretary aired an episode whose plot involved a conflict between mining interests and an transnational public over the fate of a glacier in Chile.

The show, on CBS, stars a fictional Secretary of State, Elizabeth McCord (played by Téa Leoni). In “Higher Learning,” Secretary McCord is pulled into a conflict sparked a hemisphere away when protesters bar an American mining company’s trucks from entering an indigenous heritage site in the Andes. Viewers learn through protesters’ shouts that the miners intend to extract gold that lies beneath the glacier at the site. The miners planned to dig through the glacier to access the gold, and the opponents of the operation say this will destroy the glacier.

The mining company is American, and has a contract with the Chilean government. When an American employee is injured by a protester, the company calls on the State Department to ensure the safety of its workers.

The Secretary attempts to intervene on behalf of the company by negotiating with the Chilean government to shut down the protests. The issue hits her agenda just as she is preparing to leave on a trip with her daughter Alison to visit the fictional Rafferty College, which Alison hopes to attend. Stopping by the office, where she is briefed by her team of four staffers, she points out that she understands the protesters’ perspective, saying, “It’s not surprising that people would object to moving an entire glacier to dig the gold out.”

An advisor, Jay Whitman, played by Sebastian Arcelus, also points out that the whole affair has “a strong whiff of neo-colonialism.” However, the White House Chief of Staff pressures her to respond to the mining company’s interests because the company is based in the home state of a potential ally of the president. Furthermore, the mining company has a legal contract to extract the gold, so the Secretary is left in the position of having to try to protect their right to operate.

The story takes another twist when the Secretary arrives at the college campus she is visiting with her daughter and is confronted by a group of vocal students who demand justice for the Chileans and for the environment. The students jumped on the issue when the media picked up the story of a solo protester who began a hike up the glacier saying he will reach the top to pay tribute to the glacier one last time, or die trying.

GlacierHub has covered controversy over mining in glaciated areas, for example when state-owned Codelco proposed expanding Chile’s largest copper mine in 2014. The expansion, which Codelco announced would continue, albeit with some redesigns, requires major operations near glaciated territory and the removal of six glaciers. The company initially claimed that there would be little environmental damage. Greenpeace responded to Codelco’s move by declaring Chile’s glaciers an independent “Glacier Republic.” This move was a sign of protest against the failure of the state to protect glaciers. Also, in Kyrgyzstan, the Kumtor gold mine’s operations has threatened glaciers and water.

As these stories show, the episode of Madam Secretary is fairly realistic in its depiction of geopolitical issues. We see how transnational politics play a role in resource extraction. We also see how a Secretary of State uses political channels, leveraging US trade policy in a conversation with the Chilean ambassador, who she calls on to shut down the protests. At the same time, we see the human aspects of this political role, as the Secretary follows the Chilean protester’s hike and handles the confrontation with students on the campus who seek to protest injustice.

As the protester continues on his hike, he is lost in an avalanche. The mining company and the Secretary discuss workarounds including the use of an independent monitor group to supervise the operations and the possibility of mining the glacier from a site at a lower elevation, which would avoid destroying it. After this hike put the spotlight on the conflict, reports point out that the Chilean government has violated its own laws by granting indigenous lands to a mining interest. The mining company decides to abandon its plans (it finds another site in Argentina) and the protester is rescued.

The episode can be watched for free online for a limited time, here.