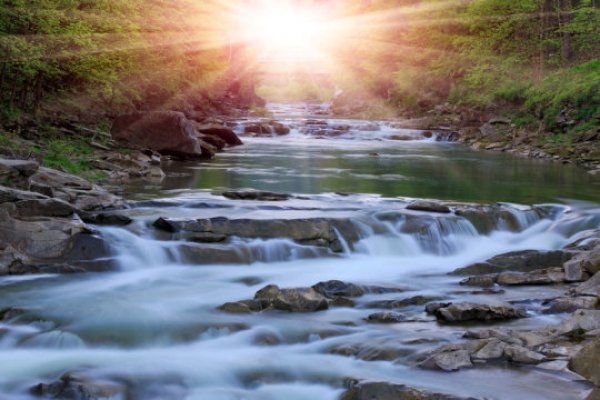 In a new study in Environmental Research Letters, a team of hydrologists that includes University of Utah professor Paul Brooks answers that question by simulating isolated climate change effects on Rocky Mountain stream systems, varying the type of precipitation (rain vs. snow) and the amount of energy (temperature) in the system. The answer, they found, depends less on how water enters the stream watershed, and more on how it leaves.

Hydrologists often construct water budgets to account for all the ways water enters and leaves a system. In the case of a mountain stream, water enters as precipitation but only a portion of this water leaves as streamflow. Much of this melt water enters soils. Here it can be used by plants or evaporate directly, with water loss from both processes combined called evapotranspiration. The water can also recharge groundwater and enter the stream later in the year. And it matters whether the precipitation falls as snow or as rain.

Climate change can affect mountain streams in two major ways: By raising the overall temperature, increasing evapotranspiration, and by shifting the precipitation from snow to rain. Both impacts could significantly alter the amount of water in a stream watershed and the amount that reaches cities downstream.

So why try to separate the influence of the two factors? "As the climate becomes increasingly more variable, we need to provide water resource managers with specific guidance on how individual warm or wet years, which may not coincide, will influence water supply," said Brooks.

The team, led by doctoral student Lauren Foster at Colorado School of Mines, constructed models of two Colorado stream watersheds on both sides of the continental divide. The researchers simulated the atmospheric conditions of a typical water year, but then applied 11 simulations of various temperature alterations to see how the watersheds responded.

In baseline scenarios, without any temperature alteration, the streams behaved as expected, with a swell in streamflow during snowmelt. During snowmelt and into summer, meltwater recharged the underlying aquifer, which then sustained streamflow through the fall and winter.

When precipitation was changed from snow to rain, the stream system became "flashier," the team writes, with the water that would have been stored as snow running off into the stream faster. Overall streamflow in this scenario decreased by 11 percent in the watershed east of the continental divide and by 18 percent west of the divide. But warming the systems by 4 degrees Celsius resulted in more evapotranspiration, enough that groundwater had to support streamflow an entire season earlier, beginning in summer rather than in fall. Streamflow reduced by 19 percent in the east watershed and 23 percent in the west, suggesting that warmer temperatures may have more impact on streams than a transition from snow to rain.

"Changes in energy, which result in changes in evapotranspiration, outweighed the changes in the form of precipitation," said Reed Maxwell of Colorado School of Mines.

The effects of these two climate change effects may vary with location, the team writes, and the results need to be checked against real-life environments. But the researchers' work helps to make sense of the noisiness in climate data and helps scientists gain a clearer picture of the future of water, especially in the mountainous west.