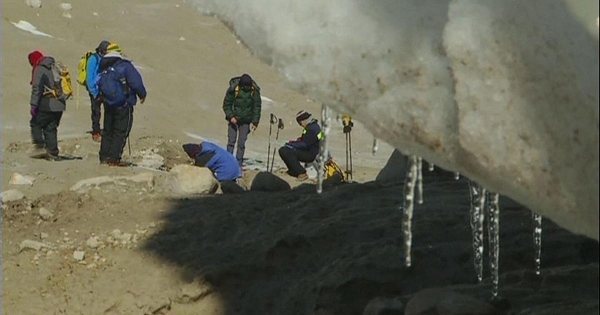 Ice caps, very large sheets of ice, do not only exist at the earth’s poles. There are tropical ice caps inmountain ranges, too. The largest is the Quelccaya IceCap, on top of the Andes Mountains in Peru.

But the Quelccaya Ice Cap is melting quickly. Expertssay it might be gone in the next 20 years. Scientists aretaking samples to gather valuable information about climate change stored in Quelccaya’s ice.

The Andes Mountains stretch across the nations of Bolivia, Ecuador and Peru. The countries rely on large glaciers for their water supply. But a 2009 report by the World Bank warns that climate change might lead to glaciers completely disappearing. This could put water, energy, food sources and residents in those regions at risk.

Experts say that in the past 30 years, the world's tropical glaciers have lost more than 20 percent of their ice and snow.

Lonnie Thompson is a climate scientist with Ohio State University.

Scientists study climate change and volcanic eruptions by looking at air bubbles and dust particles trapped in the ice. Evidence shows that pollution in South America was started by humans in the 1500s. That is when explorers from Spain forced the native people to mine silver.

But the highest increase in pollution and the fastest melting of ice started in the 20th century. Photographs show some glaciers have lost almost 50 percent of their ice and snow over the past 33 years.

"We can see that the glaciers have been retreating more and more with time,”said researcher Roxana Sierra. “This is because the temperature has beenincreasing."

Scientists say only a few places remain on Earth today where human impacton air quality can be measured. The Quelccaya Ice Cap is one of those places where scientists can study how the Industrial Revolution -- from 1750 to 1850 – changed the air we breathe.