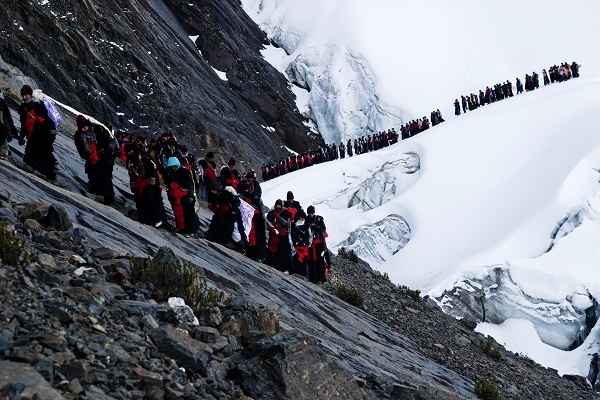 Last Sunday, May 22, was the occasion for a spectacular sight high in the Andes in Peru- over 100,000 people climb 16,500 feet for a mixture of song, dance and prayer.
The festival, known as Qoyllur Riti, or “snow star”, marks the reappearance of the constellation Pleiades in the sky, which dictates the Andean new year, and mixes both Catholic and native traditions to form a unique celebration. However, the future of the celebration is under threat, as climate change slowly melts away the glaciers atop the mountain.

Traditionally, the mountains themselves in the Cusco region are treated as gods, or “apus”, and worshippers chip away chunks of the glaciers atop them in order to bring the water back to their homes as a signifier of new life. Now, though, those worshippers are no longer able to climb to the top of the glaciers to collect that ice. They have to settle with ice from the foot of the glacier, as higher up is not stable enough to support them. The climb, as well as the journey to the festival site itself, has long been seen as a test of endurance, but now one of the key parts of that test is being taken away by changing climate conditions.

No longer are people guaranteed an area of pristine snow to carry out their rituals- instead, many people find themselves assigned a section of muddy field where there was once snow as far as the eye could see. Worshippers have expressed their fears that if something is not done to reverse climate change, then this ancient way of life could soon disappear from the face of the earth, much like the glaciers themselves.
External Links:
http://www.worldreligionnews.com/issues/climate-change-is-melting-qoyllur-riti-a-sacred-ice-tradition-in-andes-mountains
Video:
Work regions:
Latin America
Mountain Ranges:
Tags:
climate change | Melting Glaciers | religion | culture