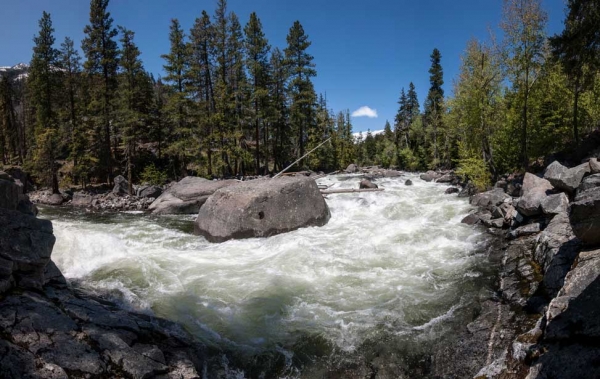 As the planet warms, plants, trees, fish and other natural resources are on the move, shifting toward the poles, in the direction of higher elevations and deeper into the seas, states a paper published February 24 in the journal Nature Climate Change. This natural capital has economic value, especially in developing countries where it accounts for a large share of resources. The team of researchers led by Eli Fenichel, an assistant professor at the Yale School of Forestry & Environmental Studies, say that where the fish migrate, money will follow, but that it’s not as simple as this.

The findings suggest that it’s not enough for policymakers to look for biophysical changes, such as the increase of fish in one place and the decrease in another, to see how wealth is shifting in response to climate change, but that they should also take “inclusive wealth” into consideration. Inclusive wealth is an economic framework that accounts for the sum of traditional, human and natural capital, in an effort to measure a country’s ability to sustain human well-being. Wealth that is stable or which increases over time indicates overall sustainability. The framework can be applied to track the broader impacts of climate change on local and global sustainability: When natural capital shifts due to climate change—either toward the poles or toward the mountains—its value changes in response to new pricing that takes into account these social considerations in addition to the biophysical change alone.

The study models potential outcomes in two fictitious fishing communities—“Northport” and “Southport”—where climate change has caused a shift in fish populations. Southport’s fish stocks decline as the climate changes while Northport’s stock increases; it’s a scenario that reflects changes anticipated in areas such as the mid-Atlantic and the waters off New England.

According to their analysis, if fish quantities increase in Northport, for instance, it will likely cause the local value of fish to drop, particularly if that community isn’t equipped to manage the resource well. “If the northern community isn’t a particularly good steward or manager, they’re going to place a low value on that windfall they just inherited,” Fenichel says. “So the aggregate could go down.”

Consider what it would take for Northport to start up a brand-new fishing operation. Maybe they don’t have the institutional capacity to adapt, and would need to buy a whole bunch of new boats. Those costs mean the booster shot of fish may not amount to the payday it appears to be. Or there could be distinct rules or fishing technology in Northport that cause the fish to be valued differently than when they were at home off Southport’s shores. Because the community now has more fish, the fish could command a different price in the local marketplace.

“People are mostly focused on the physical reallocation of these assets, but I don’t think we’ve really started thinking enough about how climate change can reallocate wealth and influence the prices of those assets,” says Fenichel. The study uses fish as an example, but natural capital can include plants, trees, and other assets valuable to humans.

“We don’t know how this will unfold, but we do know there will be price effects. It’s just Economics 101—prices reflect quantity and scarcity and natural capital is hard for people to move,” Fenichel says. “It’s as inevitable as the movement of these fish species.”

“To be clear, the ‘gainers’ here are clearly better off,” he says. “They’re just not more better off than the losers are worse off. The losers are losing much more than the gainers are gaining. And when that happens, it’s not an efficient reallocation of wealth.”

It’s sort of like taking a piece of birthday cake from one child and giving it to another child who already has cake, according to Fenichel. One child undoubtedly stands to benefit more. “But the kid who got the second piece of cake is going to be a lot less happier than the kid who lost their only piece of cake will be upset.”