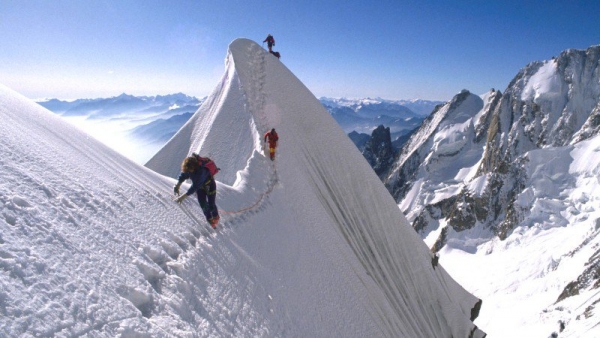 In July 2011, Arnaud Temme and three friends were climbing the Rottalgrat, a tough route on the west side of the Jungfrau in Switzerland’s Bernese Oberland, when rocks began to rain down from above. Temme, an experienced alpine climber, took a rock to the shoulder and a handful more hit his helmet, but the team eventually completed the route unharmed.

The disparity struck Temme, a 37-year-old assistant professor at the Netherlands’ Wageningen University who is also an affiliate of the Institute for Arctic and Alpine Research (INSTAAR) at the University of Colorado at Boulder. How could two guidebooks describe the same route in such different ways when they were written less than a decade apart? That question served as the impetus for Temme’s three-year study into the effects of climate change on alpine climbing danger, the results of which were recently published in the international scientific journal Geografiska Annaler. Temme says the two are “very probably related.”

Rising temperatures and higher freezing elevations on the mountains are prime factors of rockfall danger, as is the changing permafrost, or below-ground layer that has remained frozen for years but is now melting at lower altitudes. More permafrost melted last year in Switzerland than in any other year in recorded history, according to an article recently published by the Swiss Alpine Club. That phenomenon, like rising freezing levels and even an upward migration of alpine plants in the area, is a result of climate change, which is why Temme believes the rockfall danger will continue to grow.

“It’s going to get worse,” Temme says. “Ice and snow are melting, and the rocks are waiting to fall. I don’t see a mechanism that would stop this and reduce levels again.”

Temme employed a unique strategy to undertake his study, something he refers to half-jokingly as “fossil crowd sourcing:” He went to a library in Zurich that archives old guidebooks and pored over 17 editions that cover alpine routes in the Bernese Oberland. From the guidebooks, which dated as far back as 1864, he extracted detailed information related to 63 routes on five mountains—the Jungfrau, Eiger, Moench, Finsteraarhorn, and Schreckhorn. He chose the most popular routes—thousands of people climb in those spots each year—because their descriptions included more details and regular updates than routes that were less frequently climbed.

“I selected any kind of information that said something about rockfall danger,” Temme explains. “That could be simply, ‘It’s dangerous here,’ or, ‘The rock here is weak,’ or, ‘Don’t go here anymore.’ I brought all of that together and I looked at development over time.”

Temme found that warnings of danger began to appear in guidebooks around 1960 and became much more pronounced in the 1990s and 2000s. About half of the 63 routes have changed for the worse. “You really see that progression,” Temme says. “Seven of the 63 are now completely removed from any guidebooks, as if they never existed, because they’re too dangerous."

Temme is not the first to study this—Ludovic Ravanel of the University Savoie Mont Blanc, in France, has studied rockfall by comparing old photographs in the French Alps—but his findings have resonated with climbers and guides in the Oberland. Freddy Grossniklaus, an international mountain guide who was born and raised in Beatenberg, a village that stares up at the Eiger, Moench, and Jungfrau, says the increased rockfall danger has changed the way he guides.

“It’s not just the snow disappearing, it’s the rocks; some standard routes or north faces, you just can’t do safely anymore in the summer,” says Grossniklaus, who owns Swiss Guides LLC and has climbed in the area since 1975. “Because the freezing level is too high.” Today, it's often above 13,000 feet, or higher than the area’s highest summits. “You can’t even beat it by starting really early in the morning.”

That phenomenon was hammered home one day last August. Grossniklaus was leading a trek on the Aletsch Glacier. He stopped to share information with his seven guests when a chunk of ice broke free from the Moench high above them. Just a few minutes later, a massive section of cornice calved from a nearby ridgeline. “I’d never seen a cornice break off there,” Grossniklaus says.

He and his group hiked down, where they found a pile of boulders that had tumbled a mile and a half down the south face of the Trugberg that morning. “It was something incredible,” Grossniklaus says. “That glue [the permafrost] is gone.”

Whereas Grossniklaus once guided the Eiger’s north face in summer, he says he never will again. He has also nixed a once-standard rappel off the Gruenhorn saddle due to rockfall danger.

Temme points out that plenty of the routes he studied did not change significantly over time. “I’m not advocating a stop to climbing or anything like that,” he says. But he does foresee more real-time information sharing online as a way to combat the increased rockfall danger. “That’s going to be much more powerful in the years to come,” he says. “Perhaps even more powerful than these guidebooks, which will maybe get less relevant.”