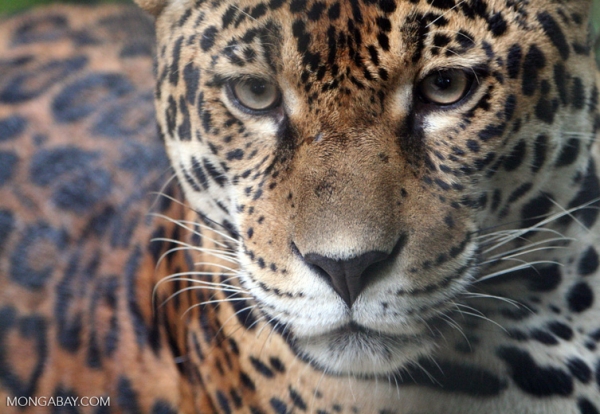 The Gordon and Betty Moore Foundation — the biggest private supporter of conservation in the world’s largest rainforest — has pledged another $100 million toward efforts to establish and support protected areas across the Andes-Amazon landscape.

The five-year commitment, announced yesterday, builds on the $358 million Moore has already invested in Amazon conservation areas and indigenous territories since 2001.

“Over fifteen years, our grantees have helped conserve more than 140 million hectares in the Amazon,” Avecita Chicchón, the Moore Foundation’s Andes Amazon Initiative director, said in a statement. “We are proud of their significant impacts in protecting forest cover and biodiversity.”

According to the foundation, which derives its endowment from funds put up by the co-founder of chipmaker Intel, the initiative will focus on three “priority strategies”: creating and consolidating existing reserves and indigenous territories; supporting policy that incorporates forest protection into land-use planning; and securing funding mechanisms, management systems, and monitoring platforms for national parks.

“Working at these different scales, from individual conservation units to land-use mosaics to national park systems, we believe we can help create a regional conservation infrastructure,” said Guillermo Castilleja, the foundation’s chief program officer for Environmental Conservation, in a statement. “This approach will help ensure the long-term resilience and durability of the exemplary gains in forest conservation that our Andes Amazon Initiative grantees and others have worked so hard to accomplish.”

The foundation added that while 400 million hectares of protected areas and indigenous territories have been created across the Amazon Basin, there remain opportunities to set up new reserves.

“There are still opportunities to create a few new areas at the national level, but many more at the subnational level (state level, municipality level) — we are working with different grantees to accomplish this,” Moore told Mongabay, noting that the Paris climate agreement could increase funding streams for forest protection. 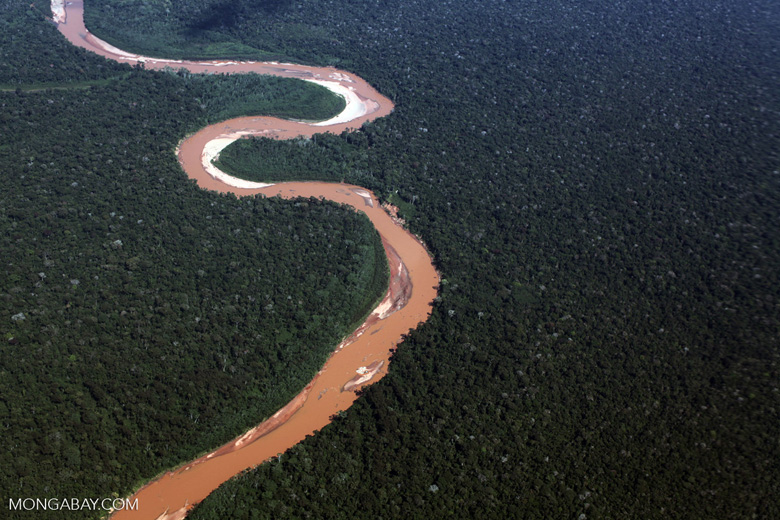 River in the Peruvian Amazon. Photo by Rhett A. Butler

Moore’s commitment comes at a pivotal time for the Amazon. While the annual deforestation rate in the Brazilian Amazon has plunged over the past decade, forest clearing is surging in Peru and rising in other key Amazonian countries. Slowing regional economies due to the global commodity collapse is causing uncertainty around conservation funding, while also increasing political pressure to weaken environmental laws.

“Large infrastructure investments for energy to expand commodity production (in general), for example, have slowed down,” Moore told Mongabay. However, certain bills in Brazil to open up protected areas and indigenous lands for exploitation (like mining) may become more attractive to boost the economy in a rapid way.”

Yet low commodity prices may also make it possible to acquire land for conservation more cheaply and persuade companies to adopt environmental safeguards in exchange for privileged access to markets. 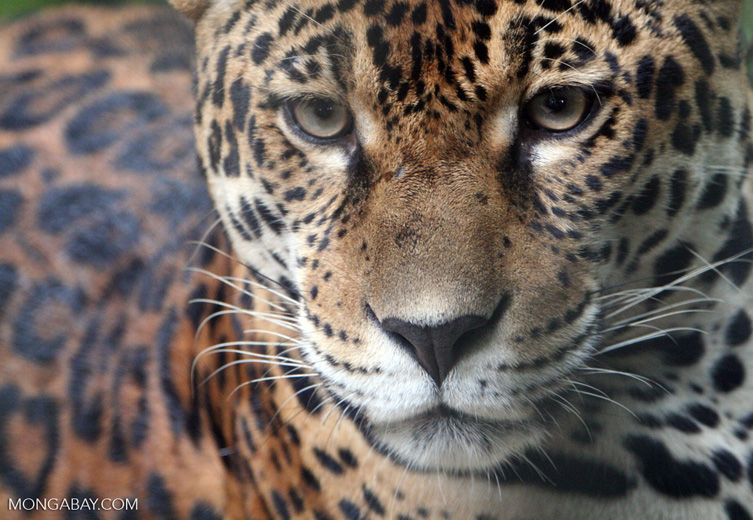 The jaguar, like an untold number of other species, calls the Amazon rainforest home. Photo taken in the Colombian Amazon by Rhett Butler.

Moore expects its investment to be complemented by its other program work in the commodities sector.

“The commodities work (beef and soy) to stabilize the agrarian frontier in the Amazon is complementary to what we are trying to accomplish in the Andes Amazon Initiative — in the Amazon the geographic overlap is located in the states of Pará and Mato Grosso,” Moore told Mongabay.

“We want to help make sure that local communities and the management and finance structures for conservation units have the resilience and long-term resources they need so conservation gains can withstand current and foreseeable pressures,” added Chicchón. 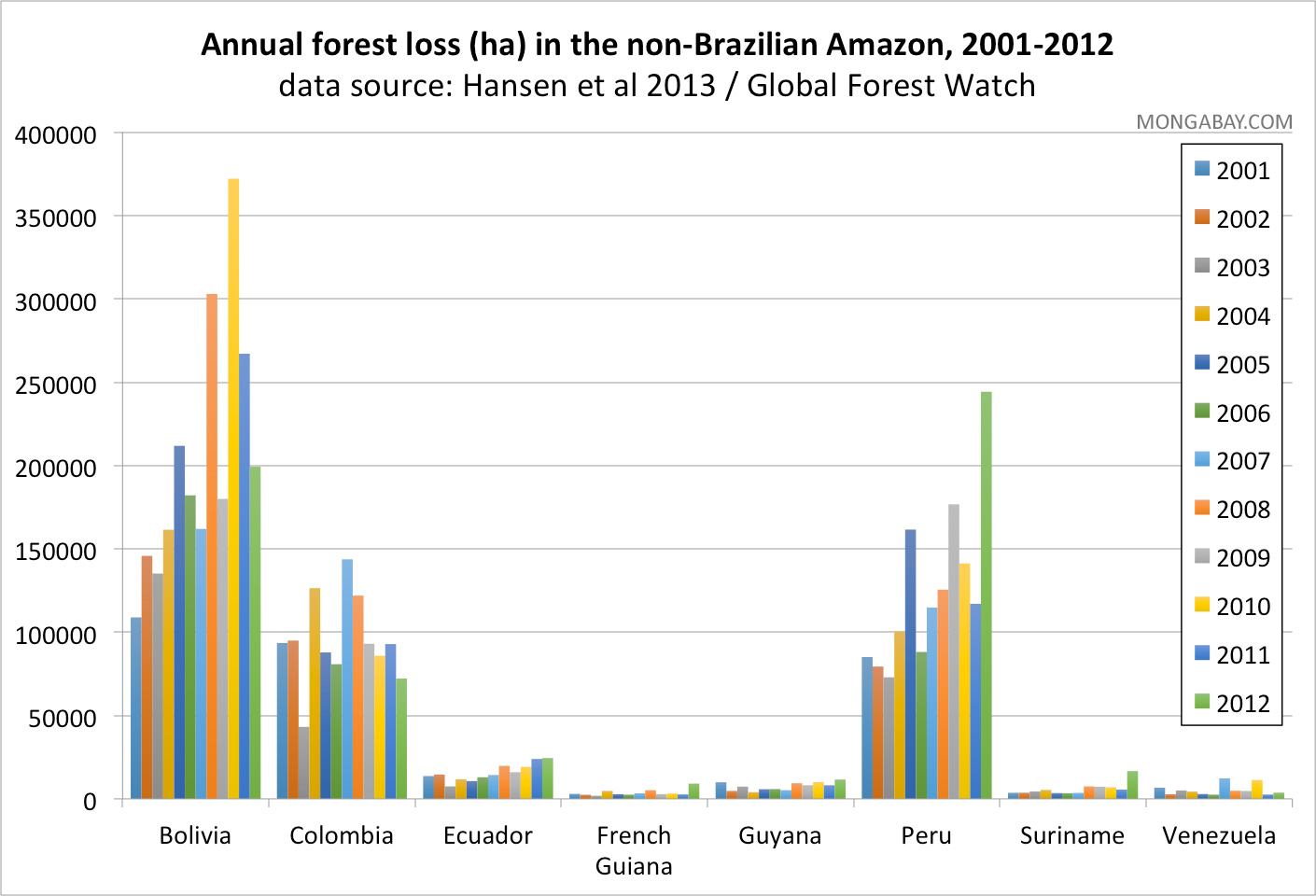 Annual forest loss in the non-Brazilian Amazon, 2001-2012, according to data presented on Global Forest Watch. 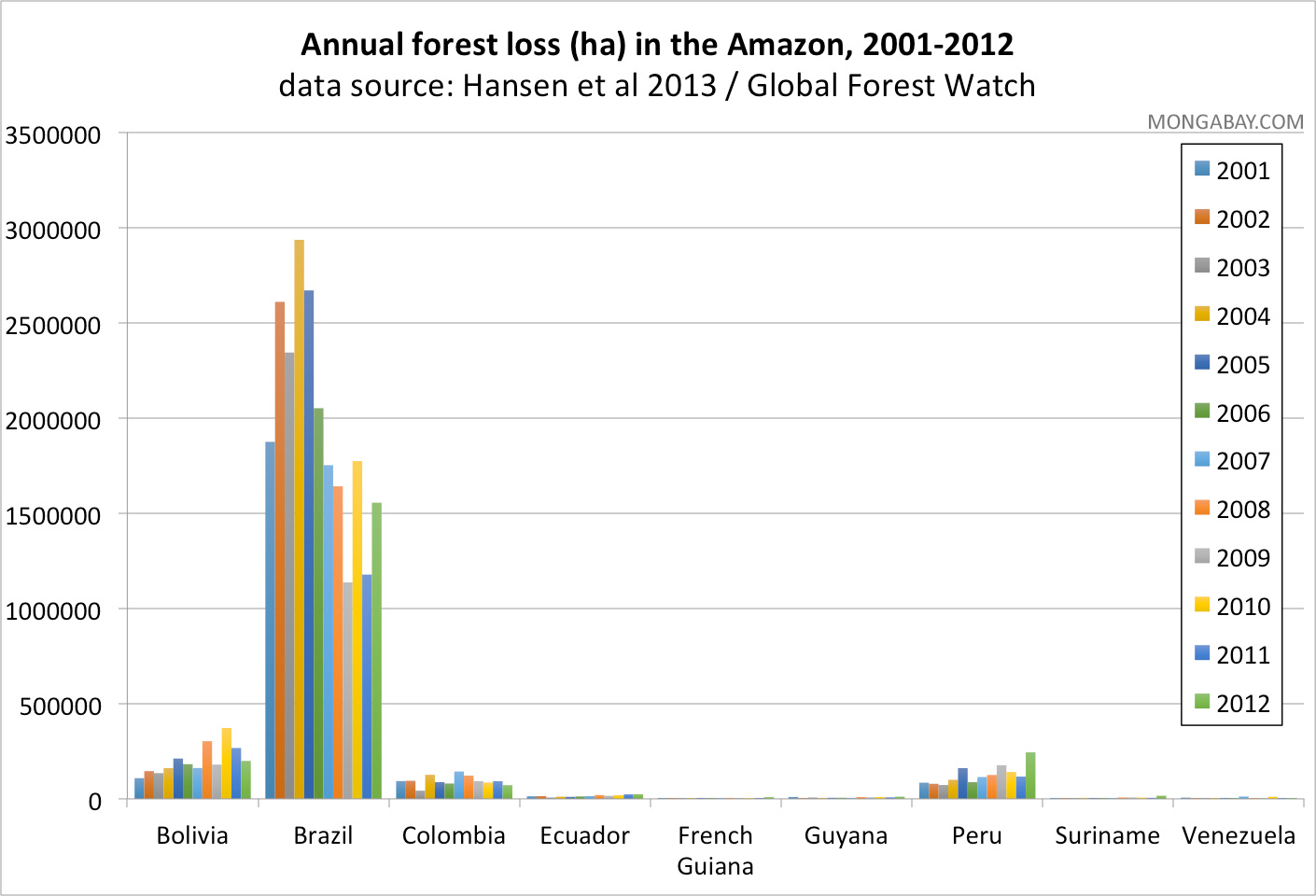