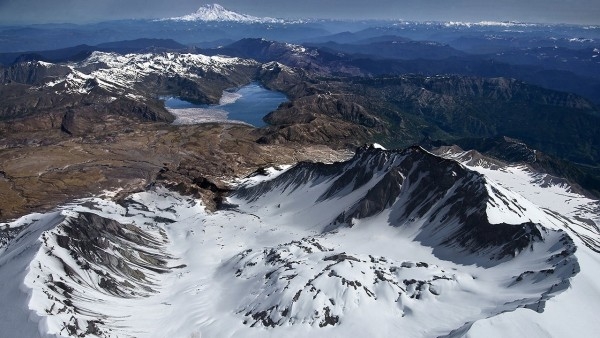 Geophysicists have imaged the magma chambers that blew the lid off Mount St. Helens in its 1980 eruption.

Geoscientists have for the first time revealed the magma plumbing beneath Mount St. Helens, the most active volcano in the Pacific Northwest. The emerging picture includes a giant magma chamber, between 5 and 12 kilometers below the surface, and a second, even larger one, between 12 and 40 kilometers below the surface. The two chambers appear to be connected in a way that could help explain the sequence of events in the 1980 eruption that blew the lid off Mount St. Helens.

So far the researchers only have a two-dimensional picture of the deep chamber. But if they find it extends to the north or south, that would imply that the regional volcanic hazard is more distributed rather than discrete, says Alan Levander, a geophysicist at Rice University in Houston, Texas, and a leader of the experiment that is doing the subterranean imaging. “It isn’t a stretch to say that there’s something down there feeding everything,” he adds.

Levander unveiled the results on 3 November at a meeting of the Geological Society of America in Baltimore, Maryland—the first detailed images from the largest-ever campaign to understand the guts of a volcano with geophysical methods. The campaign, “imaging magma under St. Helens” (iMUSH), started in 2014 when researchers stuck 2500 seismometers in the ground on trails and logging roads around the volcano. They then detonated 23 explosive shots, each with the force of a small earthquake. “You’d feel this enormous roll in the ground, and everyone would go, ‘Oh wow’,” Levander says.

The shots sent waves of energy into the crust, and the seismometers picked up reflections. Based on the expected travel times of the energy waves—they travel more slowly through magma chambers than through dense rock—the researchers could piece together a tomographic image of the crust between depths of 5 and 40 kilometers. To map the upper 5 kilometers of crust, they placed 920 seismometers near the volcano summit and monitored them not only for reflections from the explosions, but also the small earthquakes that occur frequently near Mount St. Helens and even the high-frequency noise produced constantly by Earth itself. Finally, they placed a set of 75 long-lasting seismometers around the volcano, where they will remain until 2016 to listen for earthquakes that rumble all the way through the Earth—so-called “teleseismic earthquakes"—that can help produce images down to 80 kilometers.

Matching the new magma reservoirs with earthquake data also may explain how the massive 1980 eruption of Mount St. Helens occurred. In the months before the eruption, a series of small earthquakes was detected along a peculiar path. At the time, their location could not be explained. But according to the new picture, those tremors may have marked the pumping of magma from the lower to the upper chamber, which soon pressurized to the point of eruption. “We can only now understand that those earthquakes are connecting those magma reservoirs,” says Eric Kiser, a seismologist at Rice University. In the future, he says, volcanologists should sound the alarm if they hear earthquakes along that particular path. “They could be an indication that you have migration of fluid between the two bodies.”

The new report is just one of the campaign’s initial results. But even seeing the outlines of the two chambers will reassure geochemists, who have long favored a step-wise model for eruptions at volcanoes like Mount St. Helens. In a lower chamber, magma can slowly cool, allowing dense crystals to settle out to the bottom. That leaves behind a lighter magma that can then rise farther into an upper chamber, ultimately driving an eruption. A similar two-chamber system was imaged this year underneath the supervolcano at Yellowstone National Park in Wyoming.

Several mysteries remain at Mount St. Helens. In 2009, researchers using a smaller array of seismometers claimed to have found a shallow magma chamber at 2 kilometers’ depth. Levander says he sees no sign of this shallow chamber, although his active shot array, spaced farther away from the summit, would not be expected to be sensitive to it. Brandon Schmandt, a geophysicist at the University of New Mexico, Albuquerque, who is leading the dense 920-seismometer part of iMUSH that is sensitive to such shallow depths, says he, too, does not see signs of the chamber. “If it exists, it is a minor part of the system,” he says.

Another question is how extensive the deepest magma chamber is. Since the 1980s, geoscientists have studied a more electrically conductive layer of rock called the Southern Washington Cascades Conductor (SWCC) that runs north-south in the deep crust and extends for about 100 kilometers from Mount St. Helens up to Mount Rainier. The SWCC could arise from highly conductive deep ocean sediments that have since turned to rock. But a controversial 2009 study suggested a magma body could also be responsible for the signal. Yet another part of the iMUSH campaign is an effort to stick electrodes and magnetometers in more than 100 locations to better understand the SWCC.

Kate Miller, a geophysicist at Texas A&M University in College Station who is not affiliated with iMUSH, says the results at Mount St. Helens will be a boon to volcanologists who want to model the movements of magma through Earth’s crust. “You’re actually seeing it in action,” she says. “Now, you can go in and model the plumbing system.” She is also intrigued by the apparent connection between the two magma chambers along a narrow channel. “The idea that [magma] is coming up along an interface is interesting.”

*Correction, 5 November, 11:30 a.m.: This article has been corrected to clarify that the Indian Heaven volcanic field is a set of dormant—not extinct—volcanoes.