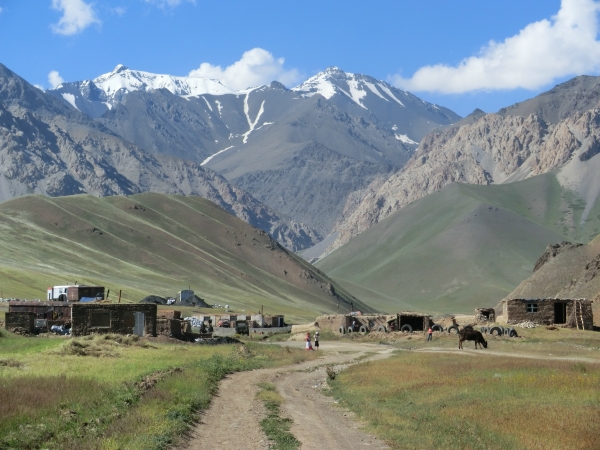 A warming climate is likely to drive species to higher, cooler altitudes. A new study highlights a less obvious, yet crucial way in which their new habitat could differ from the one they leave behind.

Mountains are home to many living species, with biodiversity typically peaking at mid-altitudes. Scientists have long struggled to explain why this is the case, invoking factors such as low temperatures at high elevations or human disturbance further down. According to new research, mid-altitudes host the largest number of species because the size and the connectedness of similar habitats are greatest there. One implication of their findings, presented in the Proceedings of the National Academy of Sciences, is that moving to higher elevations to adapt to a warming climate could drive species into habitats with a whole different set of spatial properties.

Many factors determine the number species that can co-exist on a patch of land. Large areas with similar properties typically host more species than small ones. And their biodiversity can be increased further if many similar habitats are connected. In mountainous terrain, other factors come into play, such as temperature, biological productivity, and exposition. By transposing the findings from flat land to mountainous terrain, a team of researchers from across Switzerland has found a new way to explain the observation that biodiversity in mountainous terrain tends to peak at mid-altitudes.

"In mountainous terrain, peaks and valleys are isolated habitats, like islands in the ocean, whereas mid-elevation sites form well-connected patches," explains Enrico Bertuzzo, a researcher at the Ecohydrology Lab at EPFL and first author of the study. "Given that habitat area and connectivity foster biodiversity, whereas isolation favors the dominance of few species, we hypothesized that topography itself could be playing a key role in regulating how biodiversity varies with elevation."

Biodiversity is often studied on idealized cone-shaped mountains, where similar habitats are assumed to be found at similar altitudes. In this case, habitats get smaller with increasing altitude, and their species richness is predicted to decrease, leading biodiversity to peak at foot of the cone and steadily decrease with elevation. Instead, Bertuzzo and his coauthors took a more laborious approach. "Rather than simplifying mountainous terrain to perfect cones or regular hills, our starting point was to consider it in all of its complexity," explains Florian Altermatt from the Institute of Evolutionary Biology and Environmental Studies at the University of Zurich.

To test their intuition that the very structure a landscape can shape biodiversity patterns, Bertuzzo and his coauthors let loose a large number of virtual species on a mountainous terrain in a computer simulation. Each virtual species was assigned an optimal altitude at which it could thrive, and these altitudes were distributed uniformly across all the elevations considered. When the researchers let the virtual species compete for habitats on landscapes modeled on real-life ones, their simulations confirmed their intuition: topography alone was enough to explain biodiversity patterns observed in nature.

"Other factors, like temperature, productivity, etc., are obviously also important, but they inevitably act on top of the unavoidable effect provided by the landscape structure," says Altermatt.

These findings are of particular relevance in a warming world. "Understanding the relation between elevation and biodiversity is crucial to predict how the distribution of species will change in response to climate change," says Bertuzzo. "Warmer temperatures will cause species' niches to shift upwards. The same ecological community will therefore move up the mountain, where it will find a different spatial composition, both in terms of available area and connectivity. Our findings underscore the importance of considering these factors to predict future changes."