Do you know what this architectural marvel is? 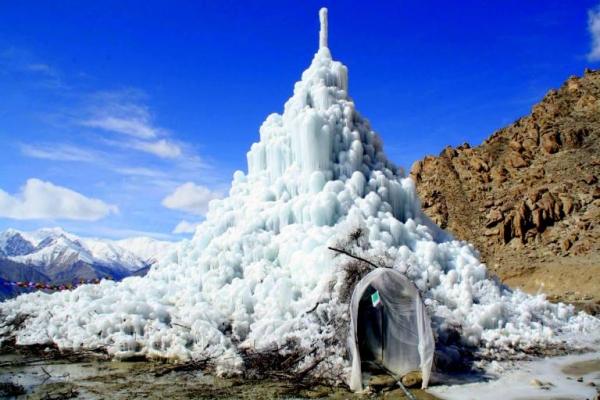 Have you ever visited a structure that changes every time you go to see it?

Last year,  when I spent about a month in Ladakh, I had the fortune of seeing the pilot “Ice Stupa” in all of its ever changing glory. Built to combat the region’s acute water crisis, the Ice Stupa is a a towering cone of ice that can store waste water so that it can be used to irrigate fields during spring time. Shaped like a Buddhist mud stupa, with brambles of seabuckthorn bushes and prayer flags adorning it, this ice structure dominates the barren village of Phyang.

Picture a large cone-shaped ice structure that glints from a distance in Anakin Skywalker’s home planet. That’s how prominent it is.

For eons, farmers in this rain-shadow region depended on melting snow to grow wheat, barley, vegetables etc. However, with the advent of global warming, glaciers have been receding at an alarming speed. They end up releasing little water in spring and a lot more in winter-where it  ends up going waste.

However, the idea of storing water by grafting artificial glaciers – to coin the term –  is not new.  Chewang Norphel, a civil engineer, came up with the idea of grafting artificial glaciers through diversion canals. The canals diverted water from the main stream to catchment areas shaded from the sun. But there were limitations in terms of finding such a spot at high altitude (13,000 ft), where people could ascend to regularly and maintain it.

Then, Sonam Wangchuk, a mechanical engineer and founder of the alternative school SECMOL, came into the picture. He sought ways to improve upon Chewang Norphel’s artificial glaciers.  He theorized that by reducing the surface area exposed to sun and warm wind, there wouldn’t be a need for the artificial glacier to be made at a high altitude. It would also make the ice structure last longer.  How it works is simple and needs no pumps. Water maintains its level- so if say, water is piped 30m upstream, it would rise 30m from the ground when it reaches the village. Since the pipe is upstream, the water flows down to the village because of-thank Newton- gravity. As the water jets out from the pipe which is narrower at the opening (picture a hose) in Ladakh’s winter nights-with temperatures close to -40 degree Celsius- the water freezes by the time it reaches the ground.   The seabuckthorn plants help scatter the droplets making it easier for water to freeze as it comes down. The ice forms layer by layer on dome structure built by volunteers. The dome structure which has plastic sheets, distributes the weight evenly, as the ice rises to the sky taking the natural shape of a cone.

The prayer flags on the Ice Stupa, Wangchuk admits candidly, is less to do with religion and more to do with the fact that it breaks warm wind.

“What I like about it” he mused, while having his dinner with a group of SECMOL volunteers, “is that it is not just a thing of beauty-but that it is a thing of functional beauty.”

At 64 ft, the pilot Ice Stupa had surpassed the Guinness Book of World Records for the largest man-made ice structure by 11 ft.  The pilot Ice Stupa melted completely on 6th July, the glacial stream of which now feeds about 5,000 trees. For the coming winters,  Wangchuk envisions more Ice Stupas dotting Phyang’s landscape.