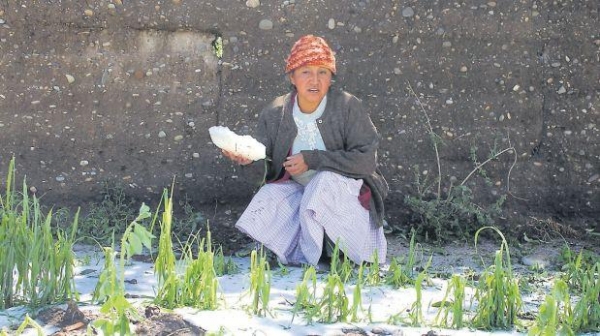 The Food and Agriculture Organization (FAO) and the Mountain Partnership Secretariat announced on 22 April 2016 that they would start a Mountain Facility, or funding mechanism, to address the rising threat of hunger in the mountain areas of developing countries. The announcement was made at a meeting at FAO in Rome, Italy, convened by the Permanent Missions to the UN of Costa Rica, Italy, Switzerland andUganda, four governments that belong to the Mountain Partnership.

The four diplomatic missions organized the meeting to present an FAO report, called “Mapping the vulnerability of mountain peoples to food insecurity”. Produced with the Mountain Partnership Secretariat, the study reveals an alarming 30-percent increase, between 2000 and 2012, in the number of mountain people who are vulnerable to food insecurity in developing countries.

“While food insecurity decreased at global level, it rose from 35 to 39 percent in the mountains,” Thomas Hofer, Mountain Partnership Coordinator, told the gathering of 60 Rome-based UN diplomats.

Referring to mountains as ‘essential sources of oxygen and water’, Ambassador Marco Vinicio Vargas Pereira of Costa Rica led the series of calls for support. “Populations who inhabit mountains are their guardians, great allies of all of mankind, and their vulnerability affects everyone,” he said.

“Investments in mountain regions are profitable and rewarding in economic, social and environmental terms,” said Ambassador François Pythoud of Switzerland, who also emphasized the importance of long-term support for the Mountain Partnership Secretariat.

Ambassador Kassam Mumtaz of Uganda outlined the causes of food insecurity in the Mount Elgon region, where the Fifth Global Meeting of the Mountain Partnership will be held in October 2016. “We believe that these national, regional and local issues can be addressed through the concerted efforts of a global alliance like the Mountain Partnership,” she said, pressing for countries to reinforce their commitments and contributions to sustainable mountain development. “I believe that wider and deeper engagement of the international community on issues concerning the social and geo-environmental challenges of mountain areas is necessary,” said Davide Bradanini of the Permanent Representation of Italy, inviting coordinated action to widen the reach of the Partnership and its ‘concrete results’.

Before the start of the discussion on mountains, meeting participants attended a tree-planting ceremony on the FAO grounds. Presiding over the symbolic event to mark Earth Day and the signing of the Paris Agreement on Climate Change, FAO Director-General José Graziano da Silva stressed the need to safeguard the world's ecosystems, the foundation of food security.