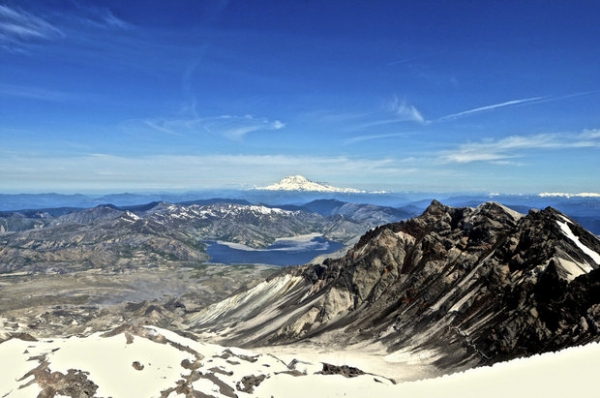 Seated in a circle around the conference room at Blue Mountain Community College in Pendleton, about 30 people gathered Saturday afternoon to discuss the effects of climate change on local forests and what can be done to make the landscape more adaptable.

Wildfire weighed particularly heavy on the group’s minds, which included forest landowners, loggers, ranchers and a multitude of agency officials. Together, they brainstormed conditions on the ground and what management is needed to maintain healthy, productive forests.

The workshop was coordinated by the Umatilla County Climate Change Focus Group and facilitated by employees from the Umatilla National Forest, Oregon Department of Forestry, Oregon State University Extension Service and Confederated Tribes of the Umatilla Indian Reservation.

“There’s a tremendous amount of knowledge right here in this group,” said Dave Powell, a retired silviculturist and member of the county climate change group. “I’ll be very surprised if we don’t realize, by the end of this day, that we’re all in this together.

Powell turned things over to Chris Johnson, deputy fire staff officer with the Umatilla National Forest, who reviewed climate change models suggesting the average temperature is rising. One model by OSU indicated temperatures in the Blue Mountains could rise anywhere from 1 to 3 degrees Celsius over the next 75 years.

As the weather gets warmer, Johnson said, snowpack is diminishing, which sets the stage for abnormally large wildfires. Oregon’s snowpack was the lowest on record for the 2015 water year, setting up a devastating fire season that strained resources across the West.

Forests make up 35 percent of all land in Umatilla County, and 37 percent of those forests are owned by private landowners. The workshop focused primarily on which practices will help those landowners take better care of their property in a changing environment.

“We’re not just victims to the climate,” Johnson said. “There are things we can do.”

Johnson went over the four “R’s” for adapting to climate change: resistance, resilience, restoration and redundancy. By clearing buffer zones around property and thinning overcrowded tree stands, fires will have less fuel available to spread out of control, and homes will have better protection.

Fire does have a natural role to play in the forests, said Richie Gardner, supervisory forester with the CTUIR. In the past, wildfires used to burn more regularly in the woods, clearing brush and vegetation below the tree canopy. However, decades of fire suppression have built up a backlog of fuels that are prime for high-intensity blazes.

Prescribed burns are one way of reintroducing fire to benefit the forests, Gardner said,

“When we do prescribed fire, we can do it in a way that’s safer,” he said. “It’s risky, but it’s not something I would completely shy away from.”

Gardner and Johnson led one of three breakout sessions during the workshop, where participants got to talk more in-depth about their experiences and goals for the forests. Topics ran the gamut from preserving water and wildlife to bolstering markets for timber — one report suggests timber harvests have dropped 90 percent in Eastern Oregon since the mid-1980s. Everyone agreed the forests need proactive stewardship for future generations.

Jeff Blackwood, a former supervisor of the Umatilla National Forest who helped coordinate the workshop, said he was pleased with the turnout and heard a lot of support for thinning tree stands. He said the focus group will take information shared Saturday and publish it for the public to use as a resource moving forward.

“Our future is constantly changing,” he said. “I think we would look to the experts here to carry the dialogue along.”

The board of commissioners supports the Umatilla County Climate Change Focus Group to help promote education and adaptation to climate change. The group is planning a series of additional workshops covering agriculture, human health, wildlife, fish, water and opportunities for resource conservation.