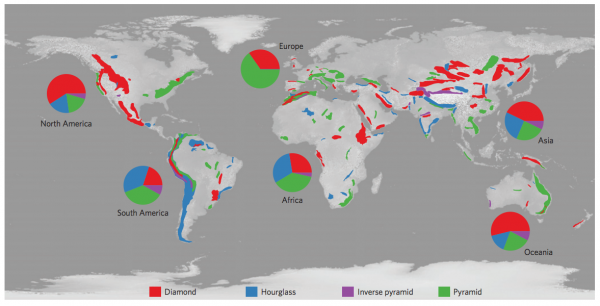 One way animals and plants can cope with climate change is to relocate. Research shows some species are already shifting to higher ground or towards the poles in search of cooler climes.

But for creatures already living in mountains, the solution is not so simple. A new study of 182 high-altitude regions across the world shows how mountain shape is critical in determining whether a species will find refuge from rising temperatures further uphill.

This means the odds of survival are better for some species than others, say the authors.

The typical image of a mountain is a pyramid shape - a broad base that tapers to a peak. In theory, as species move upwards the habitat available to them shrinks, the paper explains.

But the study, published in Nature Climate Change, finds that over two-thirds of mountains don't follow this rule. In fact, mountains fall into one of four shapes: diamond, pyramid, inverse pyramid and hourglass, as the diagram below shows. The most common mountain shape in the new study is the diamond (39%), followed by the traditional pyramid (32%), the hourglass (23%) and the inverse pyramid (6%).

The graphs below from the paper show how the amount of available habitat would change for each mountain type if global temperatures were 2C warmer than during a 1986-2005 baseline period.

You can see that while habitat decreases with elevation with the traditional pyramid, for other mountain shapes it increases (inverse pyramid) or plateaus before decreasing again (diamond and hourglass).

The Himalayas are an hourglass mountain range. That means species living in its foothills will encounter a bottleneck as they move higher, squeezing their potential habitat, lead author Paul Elsen from Princeton University tells Carbon Brief.

The bird species Beautiful Nuthatch and Ward's Trogon could face an increased risk of extinction if they moved to a higher elevation, for example.

However, for species already living in the narrow bottleneck, the potential habitat increases as they move to higher ground, Elsen notes.

"Two fantastically coloured pheasants in the Himalayas - the Himalayan Monal and Western Tragopan - are currently living in the bottleneck zone and would potentially benefit from upslope range shifts."

You might recognise the rainbow-coloured Himalayan Monal as the inspiration behind the fictitious rare bird 'Kevin' in Pixar's animated film 'Up ' in 2009.

The Rocky Mountains, on the other hand, fall into the diamond category of mountain shapes. Species living in the foothills would find more habitat as they moved upwards towards the middle of the mountain, as long as they stop before it reaches its peak.

The Alps are a traditional pyramid shape, so species would find less available habitat as soon as they moved uphill, say the authors.

But a species' survival chances depend on more than mountain shape, the paper notes.

For truly mountaintop species, such as the snow leopard and alpine ibex, mountain shape won't make any difference to future habitat because there's no space to move higher. These species remain a high priority for conservation efforts, the researchers say.

For species that are living at ground level, they too will find their habitat diminishes once they move uphill, no matter what the shape of the mountain.

The overall height of a peak can plays a role in how much 'refuge' habitat it can offer to shifting species, says co-author Prof Morgan Tingley, from the University of Connecticut.

As temperatures keep rising, species will run out of comfortable habitat quicker in lower mountains than in higher ones, Tingley tells Carbon Brief:

"Take the United Kingdom, where the highest mountain - Ben Nevis - is a little over 1300 metres. With such little elevational extent, the point at which a rising temperature will swamp the refuge capacity of mountains will come quite quickly. In a place like India, however, where you have vast expanses of very high, very rugged mountains, species should have thermal shelter for much longer."

However, for very large mountain ranges, getting to higher elevations may mean moving a long way, which not all species can manage, the paper notes.

The study's findings could help target where mountain species are most threatened by climate change, say the authors. At-risk regions could then be first in line for conservation efforts, such as establishing a protected area or a biological corridor as a link to suitable habitat elsewhere. Elsen tells Carbon Brief:

"Our results provide a major tool for conservation biologists working in mountain landscapes by identifying areas that may pose significant threats, such as bottleneck elevation zones."

Conservation priorities tend to focus on habitats that are isolated, rich in species, or home to very rare plants and creatures, the researchers say. But the new study suggests physical space is just as important for a species' survival - a good argument for adding mountain shape to the priority list.