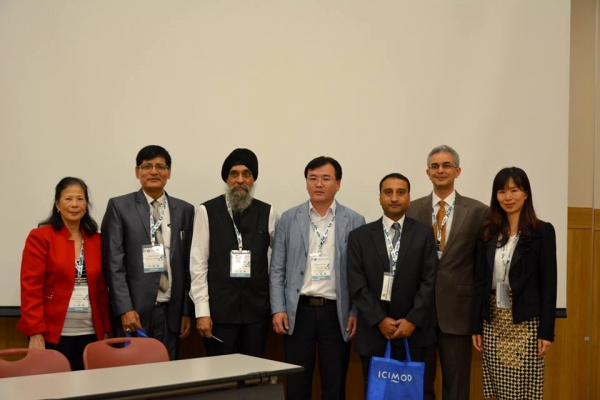 Policy makers, experts, and practitioners from Asia and Latin America met to discuss the challenges and available tools for managing air quality in mountainous cities at a session held on the side lines of the 17th IUAPPA World Clean Air Congress and 9th CAA Better Air Quality Conference in Busan, Korea. The conference is taking place from 29 August to 2 September 2016.

The session, which was organized by the International Centre for Integrated Mountain Development (ICIMOD), served as a platform for mountainous cities in China, India, Mexico, Chile, Mongolia, and Nepal to share experiences, discuss challenges, and learn about available tools with representatives from cities that have made significant progress in improving their air quality.

Highlighting lessons from Mexico City and Santiago de Chile – two cities in Latin America that are confined by mountains, Luisa Molina, President of the Molina Center for Energy and the Environment, described the steps taken in the two cities over the past two and a half decades that have led to drastic improvements in air quality.

“Much progress has been made in tackling air pollution problems through comprehensive air quality management programmes based on scientific, technical, social, and political considerations”, she said.

In both cities, it took dozens of individual measures focusing on specific sectors and fuels that together resulted in air quality improvements. The measures were chosen based on the best available scientific evidence, and their effectiveness was carefully evaluated with extensive ambient air quality monitoring networks. Ms Molina also described the systems in place for an environmental state of emergency in both cities, whereby pollution levels crossing certain thresholds triggers restrictions on polluting activities. As air pollution levels dropped, the threshold values triggering emergencies have also been lowered. Over the course of 25 years Mexico City went from ozone exceedances on 90% of days to just 1% of days.

Arnico Panday, Senior Atmospheric Scientist at ICIMOD, described the common challenges faced by mountainous cities in the management of air quality. Mountains have a strong influence on meteorology, including blocking and channelling of air flow, slope and valley winds, and the formation of cold air pools. In mountainous cities, understanding emissions sources is insufficient to manage air quality, and a detailed understanding of meteorology and its influence on pollution accumulation and ventilation is also needed.

In his presentation, Bhupesh Adhikary, Air Quality Specialist at ICIMOD, described the use of numerical modelling as a tool for air quality management. He described how air quality models are set up, how they are only as good as the emissions and meteorology data used, and how they are validated against observations.

Presentations were followed by a panel discussion, during which four government representatives gave short overviews about air quality issues in their countries. Batbayar Jadamba, Director of Environment Monitoring Division at the National Agency for Meteorology and Environmental Monitoring of Mongolia, gave an overview of the air quality challenges faced in Ulaan Baatar due to heavy heating needs and strong temperature inversion during the winter.

In China, economic growth and city development over the past 30 year has placed additional pressure on the environment. Li Xiang, Deputy Director of the Air Division of Beijing Environmental Protection of China, explaining the effective measures implemented by China to control air quality, said, “Compared with 1998, the annual average concentration of sulphur dioxide, nitrogen dioxide, and inhalable particulate matter in the ambient air in 2015 decreased by 89 per cent, 32 per cent, and 46 per cent, respectively”. She added that China is implementing the Clean Air Action Plan, which aims to cut fine particulate matter concentrations by 25 per cent by 2017.

JS Kamyotra, Director of the Central Pollution Control Board of India, described the challenges in mountainous cities in India, as well as recent experiences managing air quality in Delhi, which experiences a very shallow boundary layer that concentrates pollution near the ground. Delhi is severely affected by agricultural open burning in Punjab and Haryana, where recent efforts have concentrated on banning burning.

Ganesh Shrestha, Director General of the Department of Environment of Nepal, described challenges faced in the Kathmandu Valley relating to air pollution. “There are 30,000 bricks kilns in the two neighbouring states of India – Uttar Pradesh and Bihar – alone, not to mention the industries, power plants, vehicles, agricultural fires and cooking fires of half a billion people upwind of Nepal in the Indo-Gangetic Plain”, he said, highlighting the issues of transboundary air pollution, he said

During the BAQ conference, ICIMOD will be making presentations in several other sessions, and an information booth has been set up for the conference duration to share ICIMOD’s approaches and initiatives for addressing air pollution-related issues in the Hindu Kush Himalayan (HKH) region through a range of information materials.