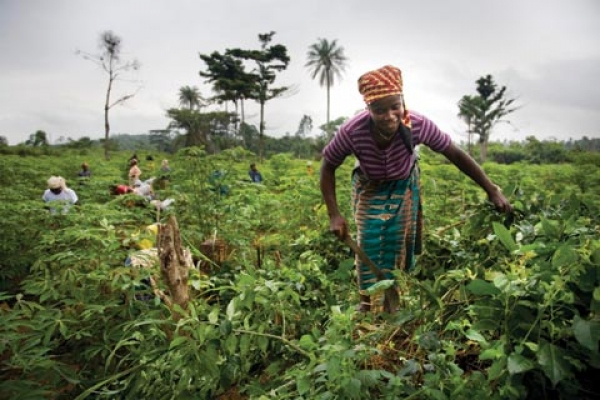 Sociologists believe that traditions, beliefs and cultures in many African countries often exclude women from some socio-economic activities. They note that in most cases, women are denied some privileges, including the rights to land ownership due to beliefs in some cultures that they are not entitled to such property.

According to them, in some African communities also, women are denied direct access to lands because the traditions have, over the years, preferred allotting land to men only. They observe that the implication of the practice is that a rural woman, whose main occupation is farming, will have to farm either on the land belonging to her husband or her father.

Agriculturalists believe that the practice has numerous effects on large scale and subsistence farming. They, therefore, solicit proper interventions from appropriate authorities in African countries to ensure that women have access to land for farming. They insist that since Food and Agriculture Organisation (FAO) estimates that 80 per cent of rural smallholder farmers worldwide are women, relevant authorities should make concerted efforts at ensuring the right of women in that regard.

Beside any interventions, the ActionAid International, a non-governmental organisation whose primary aim is to fight poverty and injustice worldwide, said it had begun campaigns to ensure that women have the right to land. According to the organisation, there is three year multi country project funded by the European Commission aimed at enhancing the access of poor and excluded women to land.

It said that the project was being implemented in Guatemala, India, and Sierra Leone to increase capacity of women, develop their skills and lead advocacy on their rights. It emphasised that the project would elicit participation of women in the development of policy and legal frameworks for their inclusion in the scheme of things on land matters at local and national levels.

Ms Constance Okeke, the organisation’s Project Manager, Public Finance for Agriculture, opined that the project would also emancipate women who were indispensable elements in agricultural development but who were denied basic rights.

“In Africa, smallholder farmers produce as much as 90 per cent of the food grown in the continent and 50 per cent of the world’s food. It is believed that support for smallholder women farmers’ alliance and skill building will enhance women’s rights to land ownership as citizens. It will also reduce poverty rates among women and improve household food and nutrition,” Okeke said.

To reinforce the ActionAid International’s advocacy, stakeholders from across African countries met recently in Kigali, Rwanda, for the first Rural Women Farmers’ Forum to stress the need to evaluate women’s rights to land across the continent. At the forum, the women listed similar challenges faced by smallholder women farmers in different African countries on land ownership.

For instance, women farmers from Nigeria decried the situation where many communities in Nigeria denied women the rights to own lands due to traditions and beliefs. Mrs Mary Afan, a smallholder farmer in Plateau, said the practice would hinder agricultural development.

“We have problems with our husbands in getting the land to farm. If our farm produce is better in a farming season, a relation – always a male – will tell us to quit the land for him during the next farming season because he wants to farm on the same land. Our livelihood is on the farms, we don’t have other means of getting money so if we don’t have farms to raise the money, it’s a very serious issue,” she said.

Sharing similar sentiments, Dr Chiyoge Sifa, the Regional Director, International Co-operative Alliance in Africa, said in most cases, women worked on farms but they were always exempted from land matters. “I may say across African nations, they have similar characteristics, the land belongs to the man; if you are divorced then that is the end of the story; you go empty handed.

“However, the situation is changing in the urban areas where women are educated and are able to buy land, assets and houses. To the best of my knowledge, I don’t know any particular country in Africa where land is largely owned by women but they constitute the larger proportion of farmers in the continent,” Sifa said.

Insisting that women rights to land should be given priority by the appropriate authorities in African nations, Ms Abby Mgugu-Mhene, Director, Women and Resources in Eastern and Southern Africa, explained that land was a very important resource for women. “It is actually a fundamental socio-economic resource for them but they don’t get direct rights to the land.

“They have secondary users’ rights, especially smallholder farmers because land, particularly, in Southern Africa, is vested in either the presidency or the state. For instance, since 1980, Zimbabwe has been going through a land reform programme, trying to redress the colonial legacy of the land ownership,” she said.

Observers, nonetheless, insist that hindered women’s right to land ownership is just an aspect that affects agricultural activities among women. They note that there are other factors that inhibit agricultural development among the rural women farmers such as poor markets, use of indigenous agricultural technologies and extraneous hurdles in accessing loans, among others.

In addressing these challenges, the African Union Commission (AUC), called on all African countries to increase funding and capacity for women farmers to fight hunger in African nations.

Ms Anna Makundi, the Coordinator, Africa Seed and Biotechnology, AUC Department of Agriculture and Rural Development, said the call was necessary in view of the growing population in the continent. “The need to promote investments in smallholder women famers is very important not only for the women farmers, but for the entire continent.

“Research findings show that the population in Africa is growing by 50 per cent faster than the gains in food productivity. If we don’t take practical actions now, food deficit is projected to increase to 60 million tonnes and 14 billion dollars by 2020. If we invest in women farmers for improved agriculture productivity, we will address poverty and malnutrition effectively,” she said.

She expressed concern about lack of exposure of women farmers to new machinery and technologies, noting that men had access to modern agriculture tools than women because they (women) had financial constraints. She, therefore, urged all African counties to listen to the needs of rural women and introduce reasonable, practicable and sustainable programmes to boost agricultural activities at the grassroots.

She suggested the need to remove barriers to the empowerment and progress of women in general, including rights of inheritance and rights to own land. All in all, participants at the forum agreed that if women were empowered and given access to land, it would address gender inequality, improve household welfare and agricultural productivity. (NAN) - See more at: http://nigerianpilot.com/rural-african-women-and-land-rights/#sthash.YymFWWN8.dpuf