What’s in a potato? A visitor to Ethiopia tastes the seeds of change 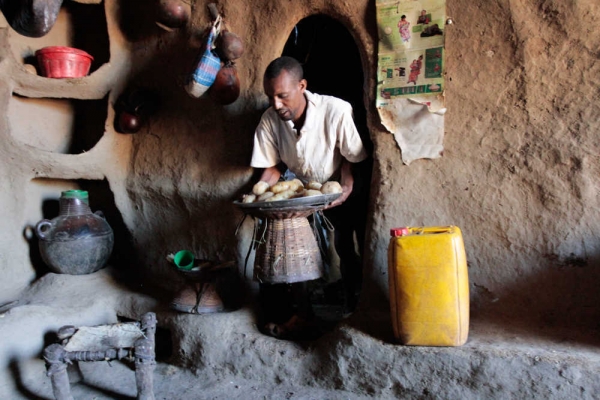 That’s all it is.

But of course, it is infinitely more than that.

For one, it’s a shaft of sunlit hospitality from a deeply kind and generous people. After a long chat in a cornfield in the village of Michael Debir in the Amhara region, Getie Adugna invited us into his home, where his wife presented the platter of potatoes. We lumbered into the cool, dark hut, decked in our expensive shoes and ungainly fleece jackets, with our fancy cameras and phones and sunglasses – and they served us. We sat in the two-room house, painted with cow dung and hung with baskets, and tried to express our gratitude for the food and the thoughtfulness.

We were often presented with food in rural Ethiopia by hard-working people enduring drought and a poor harvest—and in some cases no harvest at all. Hunks of roasted pumpkin, stewed goat meat on injeera, freshly roasted and pounded coffee, hot milk with fenugreek.

The Ethiopians are generous and proud by nature; but also, we were visiting villages where Oxfam was working with local partners specifically to build rural resilience. A single crop can draw the line between an easy winter or disaster. Adugna’s family had taken out a loan from one program, and had invested the money in sheep. Simple enough. But these animals were providing a substantial buffer between a bad harvest and hunger. The family can breed, sell, and eat them.

For another, the potatoes demonstrated the benefits of new strains of seeds. We’d already seen improved wheat growing in the fields – with fatter, more numerous grains – and now we could see improved potatoes: substantially bigger and heavier. While we peeled the skin with our fingers and enjoyed the fresh taste, we marveled at the simple difference of a seed. These improved varieties, on a single hectare of land, could make a huge difference for a family.

In fact, Adugna said he was now “creating wealth” with the benefits of these programs. He had participated in a weather insurance program, which, along with the loan offering, is part of the R4 Rural Resilience Initiative supported by Oxfam America and the World Food Programme. When Adugna got a small insurance payout one year for a partial crop loss—as determined by satellite data which tracks rainfall—he bought clothes for his daughter to wear to school. It was a common theme: parents with scant education using new tools to send their children to school.

So, a platter of potatoes, a world of meaning: resilience, prosperity, innovation, mobility.

Adugna has high hopes and determination for his family. But what will happen when his children leave? When the village is laid open to the world, what do outside forces do with it? After hours on a bumpy dirt road to reach the chilly village on a hill, we were swarmed by children and goats as we climbed a dirt path to this family’s house. A good spirit blew through the town.

And — a cell phone tower loomed over it all. Adugna’s phone rang during the interview in the corn field. The illusion that we were somehow far away and back in time was instantly shattered.

That ring tone raised the question, what does it mean to poke such a wedge into a fragile agrarian culture? How can anyone balk at the progress that brings communication, improved seed varieties, education, and goats? New technologies, new goods, new prosperity – leading to education and mobility and income.

And? To a different way of life?

You wonder. For outsiders, Ethiopia charms with is its other-worldly stature. The Ethiopian clock starts at 6 a.m. (their dawn), and marches on throughout the day six hours different from “European” time. The Ethiopian year starts in September, and marches on eight years (and sometimes seven) different from the “European” calendar. While these rhythms harken to agricultural roots, they persist throughout the rapidly growing, industrializing economy. The clock in the bustling modern airport is six hours off our watches. The receipts from the new sleek hotel with the hot water and the wifi have dates that are eight years off our calendars.

But foreigners are loudly knocking on the doors. The Chinese are furiously building roads and factories and hotels; countless NGOs are opening offices in rural capitols. As villages are cracked open, will the new winds blow good news into town? Or will they sweep up the sweet stuff – resources, educated young adults, crops and seeds – and blow it out into the wider world?

Adugna’s children are charming and curious, eager to show off their exercise books and English words. This is all good, right? It could be. As long as they are respected and empowered, and in charge of what is happening.

But. But it’s a lot. And we hope. As we celebrate, and share the bounty.

And a last note about potatoes…

I work for Oxfam, and it’s a privilege. I feel deeply connected to our mission and our work.

But a lot of days, I spend my hours staring at a monitor and looking up statistics and sitting in meetings and formulating plans and looking at maps… and it seems like a lot of intellectual and theoretical activity. To what end?

To this: that visit to that home. And that platter of hot potatoes in that brown hut and household bustling with goats and babies and wide-eyed children. The weight of that steaming (and quite delicious) potato, given in generosity and gratitude, held this family’s hopes.

It was the best potato I ever had…