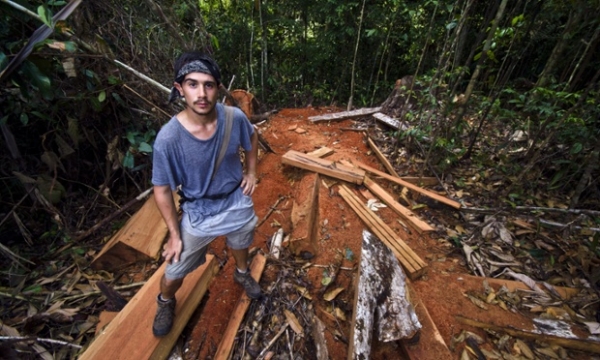 Two weeks before Peru hosts a key global climate conference, the country has come under fire for failing to protect activists who were murdered trying to defend the country’s rapidly diminishing rainforest and other ecosystems.

The South American nation has become the fourth most dangerous state in the world for environmental and land defenders, according to the NGO Global Witness, which accused the government of putting a dangerous emphasis on exploitation rather than conservation of natural resources.

In a new report, Peru’s Deadly Environment, the group noted at least 57 activists have been killed in Peru since 2002, more than 60% of them in the last four years. Only Brazil, Honduras and the Philippines have a more deadly record.

The updated death toll comes as Lima prepares to welcome environmental ministers from around the world to this year's United Nations climate conference despite the host nation’s patchy performance on green issues.

Deforestation of the vast Peruvian Amazon – which accounts for about half of the country’s carbon emissions – almost doubled in 2012 as farmers, miners and illegal loggers pushed deeper into the forest. The World Bank has estimated that as much as 80% of the country’s timber exports were felled illicitly.

Most of the murders were related to conflicts over land or resistance to mining projects and illegal logging operations. Many of the victims were from indigenous tribes who had been granted reserves or applied for land titles but received little government protection from intruders and thieves.

In one recent high-profile case, the anti-logging campaigner Edwin Chota and three other Ashéninka leaders were killed in Ucayali in September over land they had spent a decade trying to secure for their community, designed to use the forest sustainably.

Before he was murdered, Chota had asked for protection, telling police that he was getting death threats from illegal loggers. He sent photographs of the people responsible. Several are now under arrest, but the authorities are accused of negligence.

“The murders of Edwin Chota and his colleagues are tragic reminders of a paradox at work in the climate negotiations,” said Patrick Alley, co-founder of Global Witness. “While Peru’s government chairs negotiations on how to solve our climate crisis, it is failing to protect the people on the frontline of environmental protection … The message is clear, if you want to save the environment, then stop people killing environmental defenders.”

Peru has sent out mixed-messages on the environment. The government recently signed a $300m ($192m) deal with Norway to reduce net deforestation to zero by 2021, but earlier this year, it widened land-use rights for large-scale agriculture, mining, logging and infrastructure projects.

Officials in Lima also permit extensive oil drilling in the western Amazon, an area of extraordinary biodiversity near the border with Ecuador. And weak governance of the Amazon closer to the border with Brazil has made the region a magnet for illegal loggers and drug traffickers. Their violent activities are thought to have driven a previously uncontacted tribe to seek help across the border a few months ago.