Tundra in the Czech Republic – who knew? 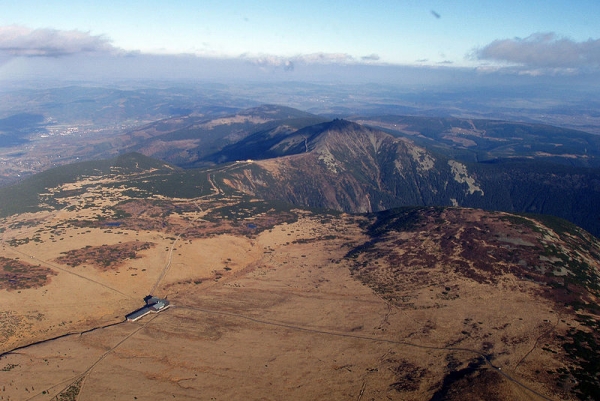 In most people's minds, the treeless landscape of the tundra is usually associated with Arctic countries somewhere in the northern hemisphere, but, in fact, you can also come across the tundra in the Czech Republic, that is in the Giant Mountains in the north-east of the country. Just how exactly has tundra developed in the heart of Europe? We find out in today's edition of Czech Life:

The Krkonoše Mountains in the north-east of the Czech Republic are home to the country's biggest national park and one of the most popular tourist destinations. But not many visitors are aware that there is a natural treasure hidden in the midst of the mountains: the arcto-alpine tundra. A new campaign entitled Krkonoše, the tundra in the heart of Europe is trying to change that.

I spoke to Jakub Kašpar, the deputy head of the Krkonoše National Park, and I first asked him to tell me a few words about the tundra biome:

“Tundra is a biotope characterised by absence of forests, or high forests. It is usually places in the northern areas of the continents, in the arctic areas beyond the circle. However, there are a few exceptions, and the Krkonoše Mountains is one of them.”

So how exactly did the arctic-alpine tundra in the heart of Europe? As you said, one would associate it with the northern hemisphere or with the Alps…

“It was due to a very large Earth glacier which covered the northern part of Europe 20,000 years ago, and the end of the glacier was only some 30 kilometres north of the Krkonoše mountains range.

“At that time, the climate was very similar to what we can see in the Arctic nowadays. The mountains themselves were covered by glaciers, and therefore the average temperatures were very low and the summer periods were very short.

“So the biodiversity as well as the geological diversity formed into the arcto-alpine tundra. The special composition of species and geomorphological forms of the landscape combines the phenomena of the arctic tundra with those typical for high mountains.

“The Krkonoše mountains are located in a very special area. There are no other mountain ranges north from here all the way to the seaside, so all the winds coming from north or northwest stop at this mountain range.

“Therefore the climate is much tougher than climate would normally be in such altitudes. If you were in the Alps or at the Caucasus, at the level of 155 metres above the sea, you would see forests or pastures, but here you have the tundra.”

What kind of vegetation and animals are typical for this landscape? What are some of the unique animal or plant species that can be found only in this tundra?

“There are two very important groups of plant and animal species which are recognised here in the Krkonoše tundra and they are one of the most important reasons why the National park was declared.

“One of the groups is called glacial relicts, which are common in northernmost Scandinavia, such as the blue-throat bird or the cloudberry plant. In Finland it is really common and you can buy cloudberry ice-cream or jam everywhere. But here in the Krkonoše mountains it is the only place in the world 800 km to the south of Scandinavia where cloudberry grows and fruits.

“At the same time it is the northernmost place in the world where you can find the dwarf pine and altogether they create a special kind of biotope: the dwarf-pine-cloudberry ecosystem.

“The second group I was talking about is the endemic species. There are several of them here, for instance a special type of sorbus tree which is a combination of two other species, which are quite common in Europe. Together they created a new species called sorbus sudetica, which can be found only in a small part of the Krkonoše mountains.”

What part of the national park is actually taken up by the tundra?

“It is not really clear. It depends in what we regard as tundra, if we talk about the top part of the mountain range or if we also include the glacial in the valleys. But altogether it is about ten or twelve percent of the National Park’s area.

Is it normally accessible by tourist or is it a subject of stricter protection?

“But tundra is quite accessible through the network of tourist trails, which is quite dense. So people can experience tundra and its phenomena on their own. They can really touch it with their hands and experience it with their senses.”

You have recently launched a month-long campaign to promote tundra in Krkonoše. What are the main goals of this project?

“The Krkonoše mountains don’t include only the tundra or the national park. It is also a place traditionally used for sports and recreation. This is where skiing started in 1870s and tourism was launched in 1850s. So the tradition of sports, recreation and tourism is very strong and Czechs traditionally associate this place with skiing.

“We would like to stress that there is also something that can be found nowhere else in the world and it is the Krkonoše tundra. That’s the main reason why we have started, with the help of Norwegian funds, the campaign Krkonoše tundra in the heart of Europe. We want to raise the awareness of the general public.

“The month-long campaign is only a start. We will promote tundra and its values throughout 0216 so it will remain our main subject throughout the whole year.”

So what does the project Krkonoše-tundra in the heart of Europe include?

“The project includes the campaign with advertisements in the media, and it also includes a roadshow travelling to five Czech towns and cities. Right now it is in Liberec. There are tents on main squares of the cities where people can find information about tundra and its species.

“Children can paint pictures on how they imagine tundra and its species and from those painting and verses we plan to publish a book next year. And then we will of course continue with our regular work but we will stress this topic much more than normally.”

“Unfortunately the Krkonoše tundra can really be threatened by the climate change. We are already facing some changes. Statistically we can see a huge change in the average temperature. Some thirty years ago average temperature change is up to three degrees of Celsius.

“We can also see changes in the biodiversity. For instance ticks are going up. Some twenty years it was not normal to come across ticks in the mountains’ spruce forests abut nowadays it is quite common. Wild boars are also going up, not only because of the climate change but also because of their high numbers. And also the forest treeline is moving upwards.”

“So if the climate change will continue, as predicted by the Intergovernmental Panel for Climate Change, we are really worried that it could threaten the Krkonoše tundra and its existence.”