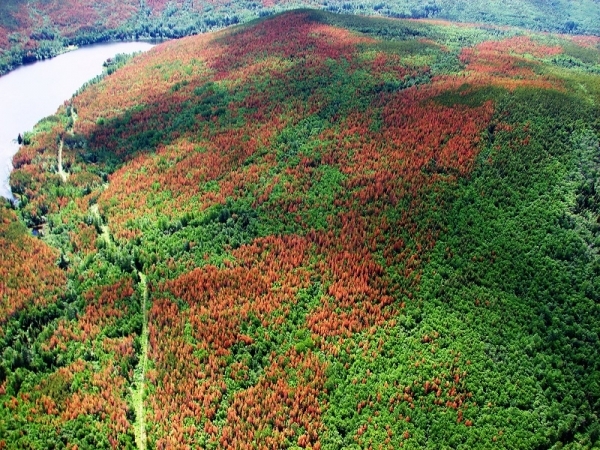 In a large forest land in British Columbia is a growing miracle: clusters of large trees that have grown as an effect of climate change.

Between the 1990s and 2005, as the temperatures became warmer, mountain pine beetles swarmed and infested about 18 million acres of lush forests, turning the area into red as the insects moved toward the Rocky Mountains. Not only did they cause the death of thousands of trees, but they also destroyed a significant carbon sink.

Basic ecology teaches us that while humans take in oxygen, the plants consume carbon dioxide – a great example of symbiosis. Further, as global carbon dioxide emissions and heat in the atmosphere have increased rapidly over the last few decades, the plant absorption has somehow helped reduce the gas's presence.

When the beetles attacked, leaving rotten trees along their path, what was once a carbon sink became a carbon source as a huge amount of such gas went back to the atmosphere.

However, the increased presence of carbon dioxide may have been the saving grace of the BC forests, said a research by the Pacific Institute for Climate Solutions of University of Columbia.

"What we have found is the forests in B.C. are growing much faster than in the past due to climate change and increases in carbon dioxide," explained Vivek Arora, the study's lead researcher and an expert of climate modeling.

As the outbreak began to taper and the amount of carbon dioxide increased in the atmosphere, the forests had more to take in, which may have allowed them to grow more trees and branches by 3 percent in size in less than five years.

The researchers even believe that if this occurrence in the forests will continue over the next 40 years, "we will more than compensate for the losses associated with the pine beetle," stressed Arora.

Although the researchers want to make it clear that the forests would not be anywhere near Amazon levels, the forests are expected to hold tons of carbon dioxide between the outbreak and 2020, which is unusual for trees found in colder temperatures such as in Canada.

Of course, the presence of new trees can still be threatened by the mountain pine beetles, but right now, we can all relish this hope for the BC forests.

The study is now available in Geophysical Research Letters.