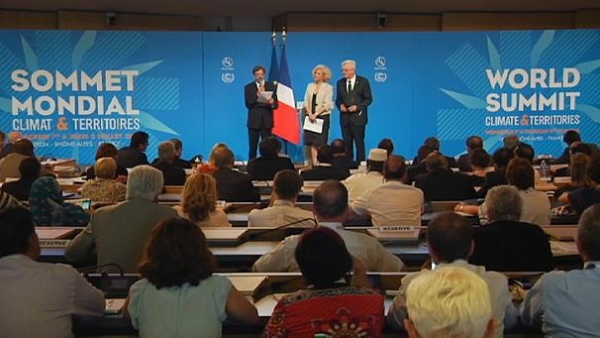 The world’s regions are in the frontline in the battle against climate change – that was the message sent from a conference of local authorities in Lyon, France last week (World Summit Climate and Territories) to national negotiators who will be taking part in the forthcomingCOP21 global climate summit in Paris .

The declaration was signed by 50 organisations (municipal/regional authorities, civic society and private sector) representing two thirds of the world’s population.

“We’re saying to the states ‘without action by your regions you will not live up to your commitments, said Ronan Dantec, representing The Global Network of Cities, Local and Regional Governments
“It’s in the territories that the climate change battle will be won or lost. So we’re saying at this point we are ready to do the job, undertake the commitments, we will do the job. But we also say: we need a number of tools, including additional funding for the southern areas. So it’s a summit that makes commitments and delivers messages.”

A crucial point to get across is that combating global warming can be profitable in its own right, according to Matthew Rodriguez, the Secretary for the Environmental Protection of California. The US state is the world’s seventh largest world economy and wants to reduce its greenhouse gas emissions 40% by 2030. It’s a commitment based on solid economics, Rodriguez believes: “Our work on clean tech and environmental programmes has drawn money to California. We bring in about 5.7 billions dollars in venture capital investments in clean tech every year. Right now our solar industry provides 65,000 jobs in California so we see this change in our environmental programmes and the changing of the base of our economy to a carbonless economy is actually going to be promoting economic growth.”

In their declaration, the cities and regional authorities called for new resources to finance the transition to a low-carbon economy. For the top UN delegate, guarantees are needed to get the private sector on board.

“Here, there is an obligation on the part of the federal states, national, subnational and local authorities, creating a regulatory framework that gives sufficient confidence to the private sector for it to invest in infrastructure, especially in the energy sector but also in transport, housing, buildings… a totally different infrastructure to that of the last century, said Christiana Figueres of the United Nations Framework Convention on Climate Change.

Having guarantees of sustainable jobs is also a demand of the International Trade Union Confederation, one of the signatories of the Lyon declaration.
Its General Secretary Sharan Burrow said: “We have a simple saying as unions; ‘there are no jobs on a dead planet’ and for us it is much more than a slogan because we have already seen a loss of jobs. We want to see secure, green jobs, greening every job, investing in the industrial transformation where we decarbonize our world. Zero carbon is not an option, it is an imperative if we´re to save the planet.”

But for the representative for West African farmers at the conference progress can only come through a profound change of policies by wealthy nations.

“To adapt is to challenge the way we see life and that has always been the problem of the rich nations,” said Mamadou Cissakho, President of the Network of Farmers and Agricultural Producers’ Organisations of West Africa.
“Challenging attitudes and behavior, that’s adaptation. So we prefer damage limitation to wholesale adaptation. There is no future without adaptation because resources are running out and we cannot replace them.”

The commitments and proposals presented by the Lyon summit, will be addressed by the French Presidency of COP21, by the UN and the participating states. In December, 196 States will attend the Paris summit aiming to find agreement on limiting global warming to 2 degrees Celsius.