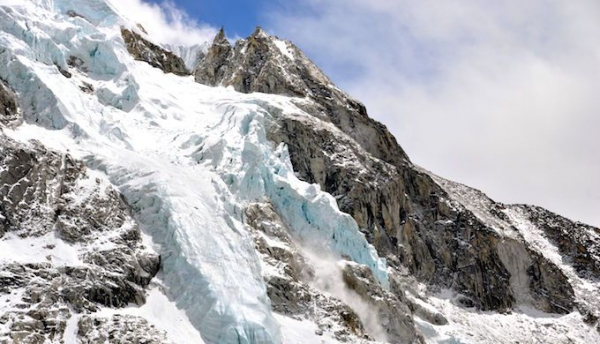 The World Water Week has put the focus back into shrinking glaciers but the jury is still out on the impacts they will have on the flow in snow-fed rivers and hydropower generation.

Glaciers are retreating due to climate change. What does that mean for water flow in the streams and rivers downhill?

The effect is very varied, says Arthur Lutz of the Netherlands-based think tank Future Water. To start with, the importance of glacier meltwater to the rivers below is not the same everywhere, he said at a session on glaciers and hydropower at the ongoing World Water Week in Stockholm. It is far more important for rivers in the Indus basin than for those in the Ganga and Brahmaputra basins.

Then, the effect of this glacier retreat also varies from catchment to catchment, he added. 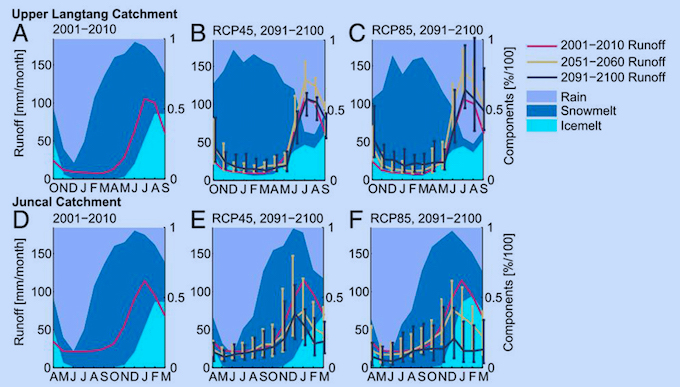 By Arthur Lutz from Ragettli et al., 2016. RCP refers to the various climate change scenarios forecast in the latest assessment report of the Intergovernmental Panel on Climate Change. The higher the RCP, the more the warming.

At the session organised by the International Centre for Integrated Mountain Development (ICIMOD), Lutz presented the results of two studies, one in Nepal and the other in Chile.

At the Upper Langtang catchment in the Nepal Himalayas, the rain, ice melt and snow melt change in a medium-level warming scenario (RCP 4.5) forecast by the Intergovernmental Panel on Climate Change (IPCC), but the overall water runoff does not change very significantly from the present situation. However, in a much-warmed world (RCP 8.5 scenario of the IPCC), the study forecasts much higher runoff by 2050 and very much higher by 2100. This will increase the danger of flash floods manifold.

But the situation is forecast to be quite different in the Juncal catchment of the Chilean Andes. There a medium warming scenario leads to more water runoff than a high warming scenario.

It all points to the urgent need for more studies at both micro and macro levels, said David Molden, Director General of ICIMOD.

What is far more certain is that most glaciers in the high mountain regions of the world are in retreat. The exceptions are glaciers in the Karakoram range of the Hindu Kush Himalayas. Lutz said the reason for this well-known “Karakoram Anomaly” was still “very poorly understood”. At present, most scientists think it is largely due to winds from the Caspian Sea bringing more snow and rain to this region.

Leaving the one exception aside, it is clear that glaciers are retreating very quickly because mountain areas are far more sensitive to climate change – a four degrees Celsius temperature rise in at the sea level becomes 5-6 degrees at an elevation above 5,000 metres, Lutz said, adding that this trend was likely to continue. 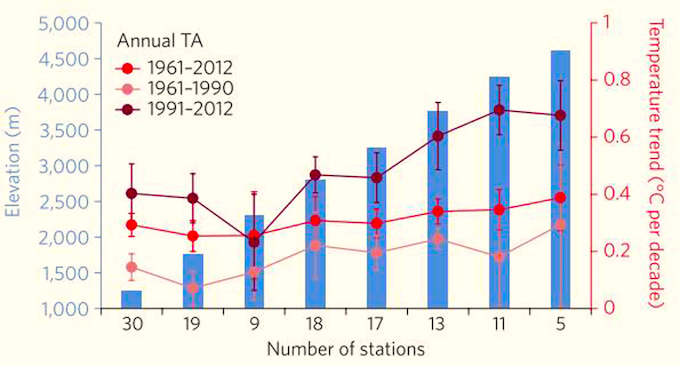 What this will mean for water flow downhill of the glaciers will depend on contribution of meltwater to total discharge; seasonal differences in a future characterised by climate change; future precipitation (rainfall and snowfall) amounts and future precipitation intensity, the researcher concluded.

What will all this mean for the many hydropower projects planned in the Himalayas? That is still not known with any degree of certainty, according to Martin Honsberg of the Norwegian hydropower firm Statkraft.

As a result, Honsberg said hydropower developers were still planning and building their projects without taking into account the possibility of changing water flow. With Statkraft running hydropower projects in India and Nepal, he felt that such uncertainties would be reduced if developers were allowed to build water reservoirs instead of run of the river projects.

Water reservoirs behind dams are a controversial subject in the Himalayas, with considerable popular opposition to such projects.

But whatever the form of the project, if it was to be built it should have a better way to share benefits with local residents, said Aditi Mukherji of ICIMOD. 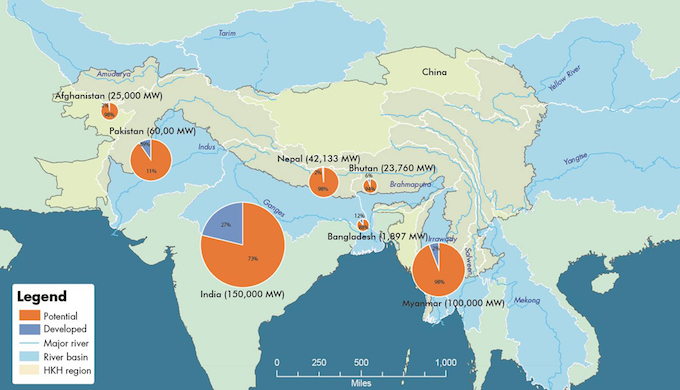 Pointing out that hydropower potential in the countries that shared the Hindu Kush Himalayas and the rivers that flowed down from this range totalled 500 GW, Mukherji focussed on one problem – that the electricity flows from the mountains to plains without providing commensurate benefits to the people who live in the mountains.

“These benefits have to go beyond compensation (for displacement) and mitigation,” she said. In a study done in the state of Uttarakhand in India and in Nepal, Mukherji and her colleagues have found that though there are laws that compel hydropower developers to pay compensation for any damage this money usually ends up in the Government treasury rather than benefitting the affected population. The situation is better in Nepal, she said, because village development committees negotiated most of the benefits with the project developers, and the central government did not enter the picture.

“Our experience is that in Nepal communities feel far more empowered; in India communities feel powerless,” Mukherji said. Part of the study carried out by her and her colleagues is now in the report Benefit sharing and sustainable hydropower: Lessons from Nepal. Mukherji welcomed the new Uttarakhand law that says the compensation paid by hydropower developers should go directly to Panchayats.

Eklabya Sharma, Director of Programmes at ICIMOD, concluded the session by reiterating that it all pointed to the need for more research and more monitoring stations all over the Hindu Kush Himalayas.