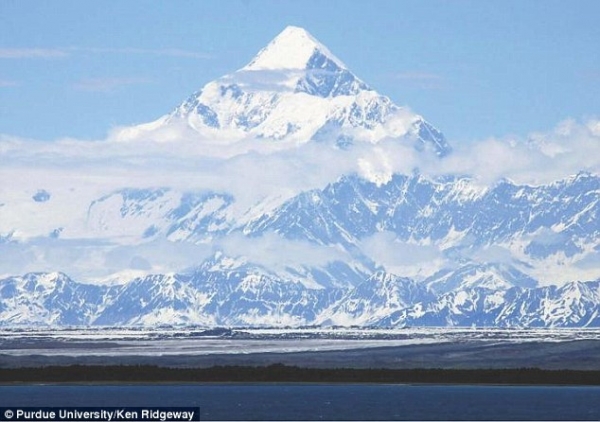 They are the ultimate symbols of longevity and permanence, but it seems that in the face of climate change, even the mountains cannot weather the storm. A new study has shown that erosion caused by the cycling of ice ages - and in particular the grinding action of glaciers - can wear down mountains far faster than plate tectonics can build them up. The study has provided new insight into how climate change and geological forces can alter the formation of mountain ranges.

Mountain ranges form when tectonic plates thrust into one another over millions of years, forcing the Earth's outer crust to crumble and rise up.

However, since mid-Pleistocene around 780,000 years ago, erosion appears to have occurred around 50 to 80 per cent faster than the mountains can grow in some areas.

Professor John Jaejer, a geologist at the University of Florida, who was among those to lead the project, said: 'Humans often see mountain ranges as static, unyielding parts of the landscape.

'But our work has shown that they are actively evolving along with and responding to Earth's climate, which just shows how truly dynamic and coupled this planet is.' Glaciers, Alaska's Yahtse Glacier (pictured) can transport huge amounts of sediment away from mountain ranges into the sea. The researchers studied the massive fan of sediment on the sea floor in the Gulf of Alaska to build up a picture of how the St Elias Mountain range has changed over time Mountain ranges are formed by the crumpling of the Earth's crust as tectonic plates collide together over millions of years but glaciers (like the one pictured in St Stephens Passage, Alaska) can grind them down too

Using seismic imaging equipment and cores taken from deep below the sea bed, the scientists were able to map a huge fan of sediment in the deep sea in the Gulf of Alaska.

This material has accumulated there due to the erosion of the St Elias Mountain range on the Alaskan coast. By reconstructing the erosion rates and modelling them against the tectonic 'up thrust' in the range over the past five million years, the researchers were able to work out whether the mountains have been growing or shrinking.

Their study, published in the journal Proceedings of the National Academy of Sciences, found erosion accelerated sharply when global climate cooling triggered persistent ice ages about one million years ago.

Sean Gulick, lead author of the study from the University of Texas Institute for Geophysics , said there was a switch in the mid-Pleistocene from ice ages that lasted 40,000 years to those that lasted at least 100,000 years.

'Since the big climate change during the mid-Pleistocene transition when we switched from short ice ages to super long ice ages, erosion became much greater.

'In fact, there was more erosion than tectonics has replaced.'