Glaciers on These 25 Mountains Will Completely Melt in 25 Years 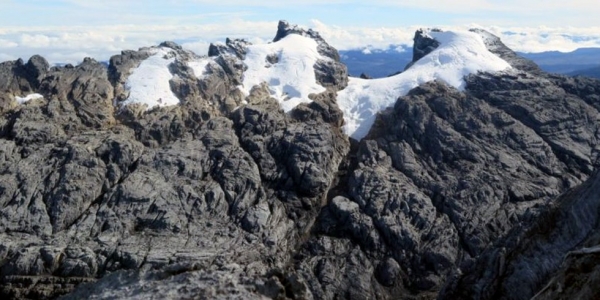 Girdling the Earth are 25 mountains whose peaks stand out a brilliant white against the dark rock. But in 25 years from now, an Australian scientist says, the snow on these equatorial summits will have vanished—because climate change will have raised the temperature enough to melt every one of the glaciers.

So concerned is the explorer and author Tim Jarvis, UK-born but now living in Australia, that he is trying to make sure that, before that happens, all the mountains are climbed by people who will publicize their plight.

Jarvis, with a first degree in geomorphology and a master's in water pollution, spends much of his time as a global ambassador for WWF-Australia. And now he's taken on another responsibility as project leader for 25zero, set up to spread the word about climate change and the glaciers' demise.

The project has developed an app for smartphones that will record how far a user's daily activity—walking, running, whatever—goes towards matching the distance covered by mountaineers who climbed three mountains in Asia, Africa and South America to highlight the glaciers' demise.

Some versions will even record the height gained, allowing users to complete a virtual ascent of the peaks, with sponsorship money going to WWF-Australia.

Carihuairazo's glacier lost almost all of its mass during the last decade as a result of global warming and ash covers caused by the recent volcanic activity of its eastern neighbor Tungurahua. At Current rate Carihuairazo's glacier is expected to completely disappear between 2020 and 2030.

On a visit to the UK, Jarvis told Climate News Network: "It's very simple—25 mountains at zero latitude; 25 years from now, zero ice."

All the 25 peaks lie within 200 miles either side of the Equator. And while Jarvis does concede that some glacier traces might linger for 30 years, he said that Kilimanjaro—Africa's highest mountain, at nearly 6,000 meters—will certainly be bare by 2040.

Several years ago, Jarvis headed a group that retraced the route taken in 1915-16 by the Anglo-Irish explorer Ernest Shackleton from Antarctica to South Georgia after his ship, The Endurance, became trapped in the pack ice.

There are lessons to be learned from the changes the intervening century has wrought, Jarvis said. "One is the amount of glacier melt caused by climate change. Shackleton and his men had three glaciers to cross. We had two—and an icy lake to wade through, where the third glacier had been.

"The other lesson is about leadership, and how that needs to be applied to an issue like climate change."

He believes that too much of the environmental movement spends its time talking to the converted. "People are too busy for statistics and hockey stick curves, and polar change is hard to represent," he said.

"You can't see or smell or taste carbon. But glaciers are a proxy for carbon, because they're tangible."

Then came 25zero, focused on the annual UN climate negotiations known as the Conference of the Parties—or COPs, in climate jargon.

Jarvis had attended one COP, and hadn't liked it. "People in suits, PAs rushing around, no sense of urgency," he recalls.

So for COP21, the 2015 round of climate talks in Paris, Jarvis decided to deploy the glaciers to highlight 25zero's concerns.

Three teams were set up, each planning to scale one glacier-clad mountain in Asia, Africa or South America. Jarvis reached the summits of two—Carstensz Pyramid in Indonesia and Mount Stanley in Uganda—but logistical problems prevented his team heading for Chimborazo in Ecuador.

The two teams who did make it relayed statements and images from the summits direct to the Paris conference in real time, hoping to inject some of the urgency Jarvis said the COPs need.

For Jarvis, who will attempt to reach Chimborazo's summit later this month, the most arresting image remains the sight of what was Africa's largest icecap, on Mount Stanley. "It's shrunk since 1906 by 85 percent—from 7.5 sq km to about 1.5," he said.