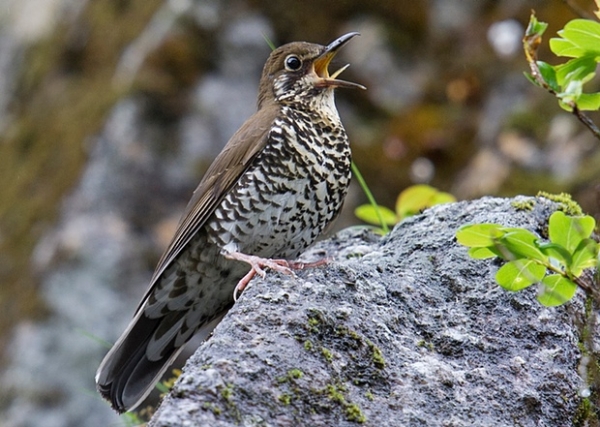 An exceptionally secretive thrush’s distinctive song has helped scientists identify it as a new bird species.

The Himalayan forest thrush, which lives in north-eastern India and China, was given away by its song which is richer and more musical than the similar-looking Alpine thrush’s rasping, grating, scratchy voice.

The discovery is relatively rare - Zoothera salimalii is only the fourth new bird described in India since independence in 1947. An average of five new birds have been identified each year since 2000, most in South America.

“To an ornithologist, the Himalayan forest thrush sounds like Adele, while the alpine thrush sounds more like Rod Stewart,” said Shashank Dalvi, an author ofthe study describing the new bird.

The song of the alpine thrush, Zoothera mollissima, “sounds very unmusical, with a mainly rasping, grating, scratchy, cracked voice and a few squeaky, clearer notes admixed,” according to the researchers.

Zoothera salimalii, however, “sounds much more musical and ‘thrush-like’”, with “a mix of rich, drawn-out clear notes and shorter, thinner ones, with hardly any harsh scratchy notes.” Its scientific name is is in honour of Indian ornithologist Dr Sálim Ali.

The new species is common in the coniferous forests of Arunachal Pradesh, India, and Yunnan province in China, but had been previously overlooked as a separate species because of its similarity to the Alpine thrush, previously know as the plain-backed thrush. The Alpine bird prefers to breed higher up, above the tree line, the scientists found.

The tree-dwelling species has shorter legs, tail and wings but a longer bill than its Alpine counterpart, and uses the shorter legs and tails to help it manoeuvre around in the forest.

Shashank Dalvi, an alumnus of a masters in wildlife biology and conservation run by the WildlifeConservation Society and National Centre for Biological Sciences, said the new species would have been seen by hundreds of birdwatchers already but they would not have heard it singing because of the time of year most birders visited the area.

“The habitat is not very remote, at least on the Indian side. You could see the bird from the road. The bird was hiding in plain sight,” he said.

Dalvi added that unlike some species new to science, the bird was not under threat, and was extremely common throughout its range.

The team’s six-year long study looked at 229 specimens, four of them live, and compared their shape, song, DNA and ecology to establish Zoothera salimalii as a unique species.

The paper also elevated a subspecies, the Sichuan forest thrush, to a species. The authors said there was likely a fourth species in China but they were not yet ready to describe it.