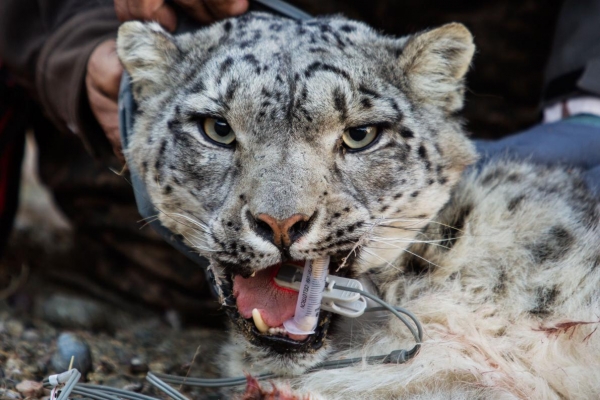 Just as the last of the blushing light drained from the sky in western Mongolia, the “ghost of the mountain” struck at the foot of sacred Jargalan mountain where the rocky snow line gives way to a dry and treeless expanse of steppe.

“I saw my animals were very afraid, they were running from something,” said Myagmarjan Maamkhuu in his yurt-like tent, or ger, the day after the incident. “When I got closer, I saw the snow leopard with one of my sheep.”

It was Tenger, a mature female well known to Maakkhuu. “Of course we were angry at first, but we’ve got used to it,” he said, offering me milky tea served in a bowl as his wife and three young sons sat by our side. “We don’t go looking for revenge.”

Maamkhuu tends more than a thousand livestock—sheep and goats mainly and a few horses—and this sheep, he said, with a zen-like lack of angst, was the third one he’d lost that week to snow leopards. In a bad year, the elusive spotted cats take up to 30 of his animals.

But the bucolic haven of that ode is fast becoming a fantasy. More than a third of Mongolia’s 2.6 million people are, like Maamkhuu, nomadic or seminomadic herders, and their pasturelands are disappearing.

Sandwiched between China and Russia, Mongolia is the world’s second largest landlocked country. It’s among the countries most affected by global warming—the focus of the world’s nations in Paris this week—because of its geographic location, fragile ecosystems, and pastoral way of life.

During the past 30 years, the region’s average annual temperature has risen by 3.8 degrees Fahrenheit (2.1 degrees Celsius).

The result: a desertifying landscape with degraded lower-altitude pastures that have traditionally nourished herders’ sheep and goats. It’s so bad that around a quarter of the country has turned into desert, while some 850 lakes and 2,000 rivers have completely dried out over the past 30 years, according to the United Nations Convention to Combat Desertification (UNCCD).

So Maamkhuu and other herders are taking their animals to better pastures at higher elevations. On those mountainsides, their sheep and goats are eating grasses that sustain wild argali (blue) sheep and ibexes, themselves the main food supply of snow leopards.

Inevitably, the big cats are now preying on the domesticated animals. To protect their livelihoods, herders are hunting snow leopards, whose numbers are now as low as 4,000, with perhaps a quarter of them in the Altai Sayan mountains.

The cats are a barometer of environmental conditions in a swath of territory that spans 12 countries and holds the headwaters of 20 major river basins inhabited by more than two billion people. Rapid warming in this region is disrupting people as well as wildlife.

If climate change isn’t slowed, more than a third of snow leopard territory might become unsuitable for the cats, according to the World Wildlife Fund (WWF), which has been helping to conserve them for many years.

To date, WWF says, only 14 percent of snow leopard habitat has been studied with a view to putting conservation measures in place. Ultimately, the goal is to gather enough information to demarcate zones of protection that would be off-limits to herders and their animals.

To Track a Sheep Thief

Last month, I joined a team of WWF researchers led by Ochirjav Munkhtogyokh on a two-week expedition aimed at trapping snow leopards, attaching GPS collars around their necks, and releasing them. During the past three years, Munkhtogyokh's team has placed remote cameras all over Jargalan mountain, and they’ve recorded the presence of 37 snow leopards, including ten cubs.

I arrived after the first week. By then, a dozen cable traps had been laid to catch cats. The traps, designed to prevent pain or injury, consisted of a thick cable tied in a slip knot and placed on a spring-loaded pressure pad.

Hours after Tenger had attacked Maamkhuu’s sheep, the team had placed four cable snares around the half-eaten carcass, which was wedged on a hillside against the bank of a dry riverbed. They’d positioned a remote video camera trap nearby to document the snow leopard should she return for another meal.

Snagging Tenger would be a bonanza because she’d been geotagged before, in 2013. That first GPS device had stopped sending data after nine months, and ever since Tenger has roamed the rocky escarpments with a mountain of data locked up in her collar—information about her daily habits and movements and the extent of her home range that would inform efforts to map out a protected area for snow leopards.

Nine days into the expedition, the team hadn’t seen hide nor hair of Tenger—or any other snow leopard. But the next morning when we went to check on the sheep carcass, most of the remains were gone. Sure enough, as the video footage from the camera trap showed, Tenger had returned to eat the rest of the sheep. Yet she’d eluded the cable snares.

Back at base camp, Munkhtogyokh opened his laptop. He wanted to show me how herders are avenging attacks on their livestock. In one frame, a snow leopard limps along with a metal hunting trap locked around its front paw. It pauses, sniffs the ground, and staggers out of camera range.

According to Munkhtogyokh, 5 of the 37 snow leopards they’d recorded had either lost a front paw or been caught in snares set along snow leopard trails.

He said he’d seen two cubs with their mother, whose front paw was caught in one. She was struggling to keep up with her young, he said. “Snow leopards catch animals with the two front legs. When one paw is cut, it’s a tragedy. How is she going to feed herself and her cubs?”

By the penultimate afternoon of the expedition a snow leopard had picked off three more sheep from Maamkhuu’s flock.

“We could go to the place where there are no snow leopards and stay there during the winter, like the mountain to the east, but on that mountain there is no grass, Maamkhuu said. “It’s bad for livestock—it would be hard to deliver our lambs.”.

Maamkhuu waved me over to his telescope, through which I could make out a bloody carcass lying in a gully of grey rock and patchy scrub far down the valley. A few feet away, a long fluffy tail was sticking out from behind a bush, slowly twitching. It was Tenger, guarding the dead sheep and waiting for nightfall when she’d eat.

Twilight bled to dusk, and the WWF researchers arrived. Tenger retreated up the hill, and the team set about laying more cable traps.

The following morning we returned to the carcass. Crouching next to her kill was Tenger, a cable-snare looped around her front right paw. The team quickly tranquilized her and, after a gentle prod with a stick to make sure she was asleep, took vital measurements, such as her weight, and swapped the old tracking collar for a new one.

“I’m very pleased that we caught the same snow leopard,” Munkhtogyokh said, kneeling over the motionless Tenger. “It’s much better than catching a different one.” That’s because the cache of information stored in her original collar and the promise of all the fresh data they’ll get from the new one will go a long way toward helping them map out a protected snow leopard area.

The mission is urgent. A further 7 degrees Fahrenheit (4 degrees Celsius) of warming is predicted in Mongolia by the end of the century, according to Tuya Tserenbataa, a climate change expert with the Mongolian government.

“There’s an old proverb,” Tserenbataa said. If you talk about bad things, then they will happen. But if we don’t do anything now, life will become very difficult.”

If the predicted warming comes to pass, life will become even harder for Maamkhuu and other herders in Mongolia—and no less hard for the dwindling numbers of snow leopards.