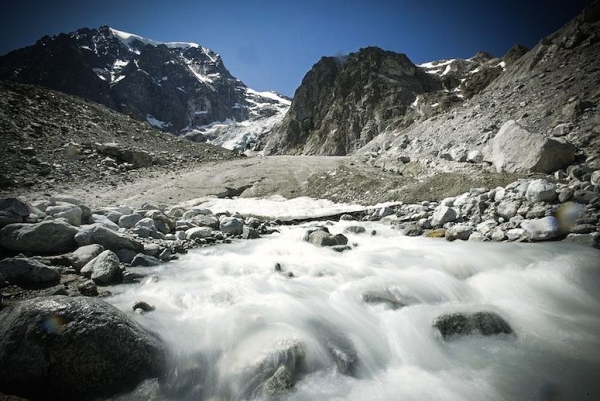 A new study finds that as greenhouse gas emissions and global temperatures continue to rise, mountain snowmelt will decrease.

Scientists like to think of mountain snowpack as a piggy bank that stores water for not-so-rainy days.

In California, for instance, melt from snowpack provides about 30 percent of the state’s water and is crucial to replenishing reservoirs during hot summer months.

Now researchers have found that 67 percent of water basins that supply 2 billion people in the northern hemisphere are at risk of decreased snowpack if greenhouse gas emissions and global temperatures continue to rise.

Scientists have known that a warmer climate means snow melts earlier and more precipitation falls as rain instead of snow, according to Noah Diffenbaugh, an associate professor in Earth system science at Stanford University and coauthor of the new study, which was published Thursday in the journal Environmental Research Letters.

Diffenbaugh said the number was surprisingly high. “That’s without accounting for increasing population or demographic changes, such as people moving to urban areas,” he said.

The study also drilled into the seasonal component of snowmelt. In California’s agriculturally important San Joaquin Valley, snowmelt slows in May, just when crop growing demands are at their highest. This year, the snowpack was just 6 percent of normal in April—a record low—and had completely disappeared by the end of May.

The lack of snowpack may have other effects too: Less snow means that forest fires may start earlier in the year, and birds could run out of food in the late summer. Without cold water from snowmelt in the summer, native trout and salmon may face extinction.

As with many questions of climate, the results are a mixed bag, as some areas could still see higher snowfall. Diffenbaugh and his colleagues tried to quantify the uncertainty of the future snowpack system. “It’s clear that the primary signal is towards decreasing snowpack because of the way temperature varies, but there is this question of variability,” he said.

The researchers found that about 90 percent of snow-sensitive basins showed potential for either increases or decreases over the next few decades.

“Just because we don’t know exactly what the future will be, that doesn’t mean we can’t make robust decisions on how to manage the environment,” Diffenbaugh said. “We can’t know the future, but we have the opportunity to make decisions that are resilient to a range of outcomes.”

That could mean building flexible infrastructure that can be used for both water storage and flood control. According to the United Nations, Thailand’s Chao Phraya basin has harvested water from floods, storing it in aquifers upstream of flood-prone areas and using groundwater to grow crops in the dry season.