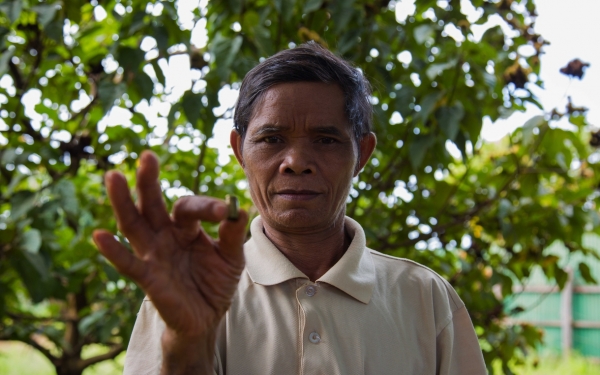 In Cambodia, villagers find peaceful means to protect their communities

Sal Hnok starts his story silently – he just takes a shell casing from his pocket and holds it up. He says it was from a bullet fired at him and others in Kanat Thom village, in Cambodia’s northern Ratanakiri province, at high noon on a day in January 2012.

Hnok explains: He and others discovered a crew working for a Vietnamese company called Hoan Ang Gia Lai (HAGL) clearing the forest near their village. “I told the company drivers who operated the tractors clearing the forest to stop,” Hnok says. “I said to them, ‘you can’t clear this land and forest.’”

The company was tearing down the forest to establish a rubber plantation. The workers told Hnok and others it had a legal concession from the government to do so. HAGL’s concession spans 94,000 hectares (more than 122,000 acres) and was affecting 17 villages.

After this first encounter, Hnok and 37 others left the area, and took down the tents the company staff were using. He says security guards opened fire on him and others. Hnok contacted the local police, but when they arrived “the company asked the police to arrest myself, a village chief, and two community representatives because they accused us of destroying the company’s property and mobilizing villagers to strike,” Hnok says.

Hnok and his neighbors were released after local rights organizations like the Highlander Association (HA, an Oxfam partner) and others intervened. He then made formal complaints to local authorities, but says few seemed interested in listening to him.

Hnok is 60, married, and a father of five children. Like most ethnic Kachok people in northern Cambodia, he is a subsistence farmer accustomed to rotating his rice and vegetable fields around forest areas near his village. Local indigenous people derive other economic benefits from the forest, gathering wild fruit, honey, wood, and resin for making lacquer.

The Kachok worship their ancestors in their nearby spirit forest. So strangers knocking down the forest, Hnok says, create a crisis for the community. “You can’t clear the forest,” he says. “It is the identity of our people.”

Hnok and others in his community were trained by Oxfam’s partner, the Highlander Association, in their rights under Cambodia’s land law: their special rights to hold communal land as an indigenous community, and to free, prior, and informed consent (FPIC). They also learned critical thinking, community organizing, and negotiation skills. HA trainers worked in the local language, and used a variety of teaching methods including role playing, and graphic posters. After the training, Hnok and several others were selected to represent the community in talks with the company.

By this time the company had already cleared an entire mountainside near Kanat Thom village. To stop the company, Hnok and others from similarly affected villages filed a complaint about HAGL to the International Finance Corporation (IFC), part of the World Bank. Mong Vichet, program manager at the Highland Association, says “we learned that HAGL was financed by the IFC through an intermediary, Dragon Capital.  We shared this information with the affected communities and advised them to gather detailed maps of their villages to file with the complaint.”

Armed with information from the communities, fifteen villages including Kanat Thom submitted a complaint to the IFC’s Compliance Advisor Ombudsman in February 2014. Oxfam’s partners, the Highlander Association and Equitable Cambodia, assisted the communities in the complaint process.

In September 2015, representatives from 11 communities met with the IFC and HAGL in Siem Reap and reached an agreement on a number of issues: The company will demarcate more carefully the land it has in its concession, compensate villagers whose land was cleared inadvertently, and support villages in getting title for their land.

Vichet says that the company has started measuring the boundaries of the community lands in three villages.  The rest of the affected villages including Hnok’s village will be measured in March 2016.

The agreement may not completely make up for all the lost lands, taken without permission from the indigenous communities, but at least now the company has to respect the rights of people there.

“My hope is that our community will be strong, and NGOs continue to support the indigenous villagers to defend their lands and .forests,” Hnok says. “If we get the lands back from the company, my next generation will be happy and live peacefully. I want my effort to defend the lands and forests of the indigenous communities in Ratanakiri to serve as an example for the next generation.”