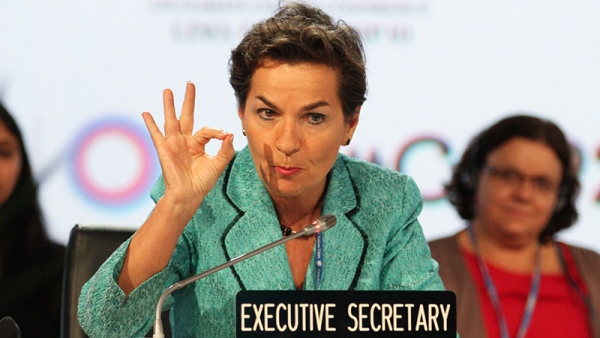 Christiana Figueres will step down in July after six years at the helm of the UN’s top climate body.

The Costa Rican diplomat, who helped forge the first global warming accord to bind all nations in Paris last December, said in a letter that she would not accept requests to stay on after her term ends on July 6th.

“It is with deep gratitude to all of you that I write to formally announce that I will serve out my term as Executive Secretary of the United Nations Framework Convention on Climate Change which finishes on July 6 2016, and not accept an extension of my appointment,” Figueres wrote in a letter dated February 12.

“We now move into a phase of urgent implementation. The journey that lies ahead will require continued determination, ingenuity and, above all, our collective sense of humanity and purpose. I know that together you will again rise to the task.”

The announcement comes as president of the UN climate talks, Laurent Fabius resigned after moving to France’s supreme court, stoking uncertainty as countries set about implementing the agreement.

It’s unclear if a new head will be in place to guide the annual Conference of the Parties in Morocco this November, where countries are expected to start work negotiating finer details of the Paris pact.

Michael Jacobs, a former advisor to UK prime minister Gordon Brown, said Figueres had “redefined the role”, giving it a wider public platform, but said her departure would leave a leadership deficit at a critical time.

“I think she has done a rather remarkable job in acting as a champion on climate action. She’ll be a hard act to follow. Previous secretaries were officials of the secretariat and weren’t in general public figures outside a pretty specialised climate world,” he said.

“I think if you were designing a process to go from Paris to Marrakech, you probably want the president of the COP and the executive secretary to be stepping down simultaneously. You would probably have wanted more continuity,” he said.

“Christiana Figueres has been a true inspiration and instrumental to the strong outcome in Paris,” she said.

“Paris should be read as a significant success story of multilateral diplomacy. In an increasingly multi-polar world, strong cooperative agreements have become much harder to deliver.

Figueres took over as UN climate chief in the wake of the disastrous Copenhagen climate summit. Asked if a global climate deal was possible in her first press conference she replied: “Not in my lifetime.”

But in a Ted Talk delivered in Vancouver this week the mother of two said she decided after that downbeat start a new, consensual approach was needed to deliver a deal.

“Impossible is not a fact, it’s an attitude,” she said. “And I decided, right then and there, that I was going to change my attitude, and I was going to help the world change its attitude on climate change.”

In a sign of her success, the Bonn-based position will be promoted to ‘under-secretary general’, on par with the heads of the UN Environment Programme and UN Development Programme.